A Spectacle on Wheels and a Seattle Ciclovía

Deep in an email from Columbia City's Bike Works announcing various volunteer opportunities related to the upcoming Rainier Valley Heritage Parade and Summer Streets event, I was asked if I could see myself "pedaling a huge bike powered float."
Yes, yes I could.
So last Thursday we left our bikes at Bike Works HQ and took the light rail up to Beacon Hill, where this beast made by local bike mad scientist Haulin' Colin lives. Then we pedaled it down the hill to Columbia City. I was told that the pedal powered parade float, or Cyclopy, as we tried calling it, was made by stripping a Toyota truck. The transmission remains, so a driver steers, shifts gears, and brakes while up to seven sets of feet pedal.
The afternoon was freaking gorgeous, and I sat back and pedaled while the locals planned a route that minimized blocking traffic and swooping down overly steep hills. We did swoop down Columbian Way, clocking 25 mph on the intact speedometer before a tire started making trouble, so we braked.
Since the recumbent pedalers up front constitute the machine's bumper, I felt quite nervous hurtling down the hill. It reminded me of how scared I was to try Zoobomb last August. But as in that case, I came out unscathed. I'm a scaredy cat, so sue me.

What I really liked was what a spectacle we became. Most passersby stopped to take a picture, and many drivers smiled and waved. I first noticed what an impact an outlandish bike can have when I rode along with Bobby Gadda on his tall bike on Halloween 2009 in LA. People shouted from stoops to ask about it, and he practically had kids running after him through the streets of Echo Park. Bike spectacles make people smile, and that's worth a lot when bikes can be such a source of tension on our streets.

Pedaling that sucker up even slight hills took a lot of work, so there was quite a feeling of accomplishment all around when we made it Bike Works. Since one of their Volunteer Repair Parties was going on, we helped enjoy their break time ice cream. (More on the VRPs here.)

Then Saturday came around, and it was time to decorate and pedal the float in the parade.


I wore a corduroy moustache, slapped some fuzzy antennae on my helmet, and played a kazoo left over from a performance of "The Lonely Kazoo: A Synthetic Journey to Heaven." Riding in the parade, we waved to smiling spectators. I noticed that more adults than kids waved back. Most kids, upon seeing the Cyclopy, just dropped their jaws and stared. Too much awesome for little brains to comprehend!
Afterwards some pedalers celebrated with a very nice homebrewed stout in a very lovely backyard, and then I went out to see how the Summer Streets event played out. Like CicLAvia, Seattle's Summer Streets events use Bogotá's ciclovía as an inspiration to create temporary public spaces for walking, biking, and relaxing in the middle of the street. 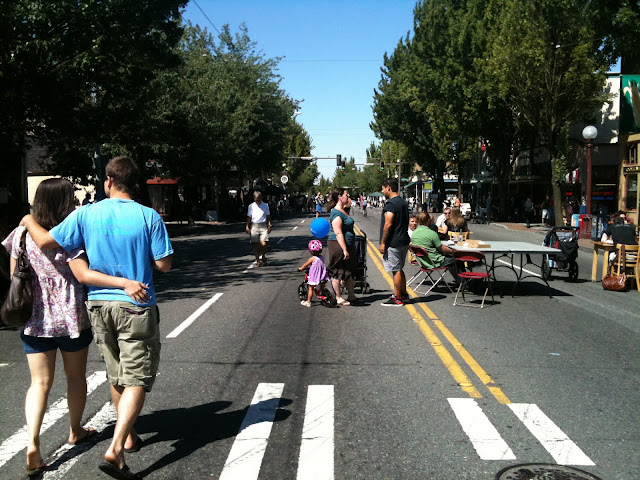 I hadn't made it to one of the events yet, so I was pretty excited to see so many people enjoying themselves. An organizer told me that a previous event in Greenwood had been packed with many more folks, but personally I found the mix of communities present at the Columbia City event to be quite an impressive feat. At the event I again encountered a factoid I'd heard tossed about before, which is that the local zip code, 98118, is the most diverse in Seattle. While I'm skeptical of claims like that (what are they trying to convey? Having lots of people in ethnic communities doesn't mean the same thing as an integrated neighborhood, and income diversity means something different than ethnic diversity), I did see a variety of programming and participants that showed a coming-together of people who might not always spend time together.

So I liked it! Way to go City of Seattle, I didn't know that watching tiny kids perform ballet folklorico was what I needed to make my Saturday perfect. I did notice, though, that people did not seem to be using the full extent of the route (something like eight blocks). On either end, where the activities ended, big expanses of concrete yawned, just waiting to be activated by human life. 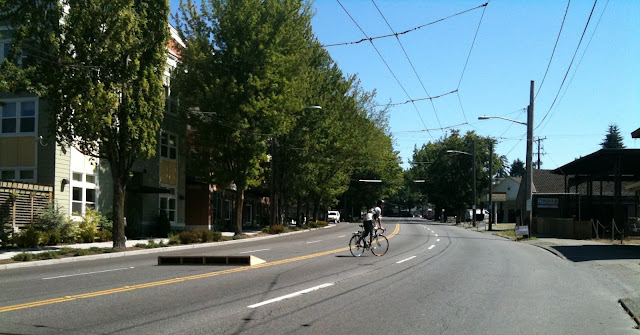 To end the afternoon, we biked the Cyclopy back up the hill to its home. The locals chose Cheasty Boulevard as our route, which is one of the "Olmsted streets," the parkways designed by the Olmsted Brothers to be part of Seattle's "emerald necklace."


By this point I was, how do you say, completely exhausted. I had to give up my seat for a bit so I could take a break and walk. It took us about 2 and a half hours to get the thing back. I got to spend that time with some really neat people. Hooray!
Posted by urbanadonia at 8:29 PM

I want everyone to feel comfortable riding bikes. But sometimes even I'm reluctant to ride. Right now, months into living and mostly not biking in Seattle, it's harder for me, mentally, to go hop on my bike than it is to walk or bus to my destinations.  I thought six years of riding in cities would ensure me against losing my momentum, but not riding my bike makes me... not want to ride my bike.

I mean, as an anthropologist who studies why people do or don't bike, it's not like I don't understand what's going on. Part of it is the ol' fear of traffic, thinking trepidatiously in advance about all the intersections where I'll have to negotiate potentially hostile drivers, but a big barrier is my lack of familiarity with my still-new city. I just plain don't know which streets are the best bike streets.

We're not yet at a point where a newcomer to a city can easily plan an excellent bike route. If you look at an overview of a city, you have no way of knowing what through streets tend to be high traffic. What looks like a quiet neighborhood street could turn out to be a traffic nightmare (ahem, 45th). Even bike maps lack authority, since city planning departments tend to be aspirational. Unfortunately designating a bike route on a map does not magically transform street conditions. On a designated bike route in my new neighborhood, I saw a sharrow painted over a pre-existing pothole. That = bad. It's like the time I biked from Long Beach to San Pedro following the LA County bike map, and discovered that the convenient route indicated on the map happened to run right through the Port of Los Angeles.

I had asked Tom of Seattle Bike Blog to take me on a tour of my new neighborhood, Capitol Hill, so I could see what streets bicyclists prefer. He showed me some neat ways to get around high traffic streets and steep hills. Things were looking up. Then he showed me his route down to Bike Works, where we helped with a fun adventure I'll be writing about later today. Guess what, there is a way to get down there that involves zigzagging through gridded neighborhoods, some of them on a bluff overlooking Lake Washington. Another cyclist, Danny, told me about his first time riding down to Bike Works. Like me, he'd assumed Rainier Ave was the best way to go, and he went for it. Sounds like it would not have been my cup of tea.

Riding back later through quietly dark, tree-lined streets, rear lights flashing red and front lights flashing white, I felt like a million bucks. Knowing how other bicyclists get around makes a city more bike friendly. We're like troves of local knowledge on two wheels.

I know there are some sites out there that are designed to make this knowledge available to the general public, but I don't know anyone who uses them, so I've assumed they're mostly for recreational cyclists planning longer trips and not for people looking to get around town.
Posted by urbanadonia at 11:29 AM

Being a Social Driver

I'm almost done with the absolute mindf**k that is moving from one tiny apartment to another. The mixing bowls have found their homes, the cats have come out from under the bed, and I can only see four boxes. Triumph!

Seeking clever storage solutions, I set out on a thrift store odyssey last week that took me on a loop of northside Seattle, from Wallingford to Ballard to Crown Hill to Shoreline. I filled my boyfriend's car with shelves, bins, and eventually a countertop.

It's no secret that I don't like driving. Our dependence on driving has a lot of very nasty side effects that I don't need to get into here. But when I do find myself behind the wheel of a borrowed car, I try to act like a member of society rather than Rebel McSexy. Isn't it strange that being a courteous driver is seen as a choice rather than a requirement of using shared roads?

I remember getting a car ride home from a tour de force of LA's bike scene, Chicken Leather, and marveling at how he managed to stay a part of what was going on outside the car even while carrying on a conversation in the car. He stuck his head out the window, gesticulated at passersby, and generally kept us part of, not apart from, the city as we drove through Echo Park.

We've got a long ways to go before everyone feels safe getting around outside of a car, and my anthropological research on transportation makes me think that shifting how people drive matters a lot. Just cause you're alone in your car doesn't mean you're alone on the road; driving is a social activity.
As a bicyclist and pedestrian, I cringe when I see motorists breezing their tons of metal through intersections as though their time matters more than any fellow road user's life. So, on the rare occasions when I'm the person piloting the gas guzzler, I make a conscious effort to demonstrate my regard for people outside my vehicle. I call it being a social driver.

Being a social driver means that I let other motorists pull in front of me, I stop for pedestrians, I wait to pass bicyclists until I can give them a wide berth, and I obey traffic laws. I drive with a window open so I can hear street sounds. I don't necessarily take advantage of "right turn on red" opportunities cause they encourage motorists to look left, inching into the crosswalk, while the light may have changed and people are crossing the street. I also do a lot of hand signaling and try to make eye contact with other road users, whether I'm walking, biking, or driving.

When I lived in Portland, I felt annoyed that some motorists gave bicyclists right of way. Everyone I know who bikes there has noted the tendency of drivers to stop at the sight of a bicyclist, ignoring or ignorant of traffic laws that make bicyclists and motorists equals. If I were pedaling up to a four way stop planning to wait my turn to pass through, it messed with my rhythm to have a motorist stop unexpectedly to give me an imagined right of way. Over the years, though, as I've biked in cities all over the U.S., I've come to see Portland's courteous driving culture as a key reason why cycling has been able to take such a firm hold there.

So even if you don't think you can brave traffic outside a car, you should see yourself as contributing to the social life of the street.
Posted by urbanadonia at 5:43 PM