I'm often invited to share my findings with audiences of students and advocates. Contact me at adonia at urbanadonia dot com for my availability and rates. 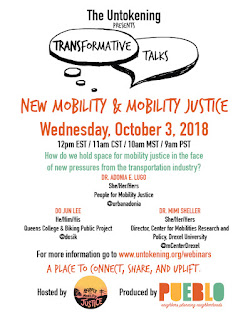 Transformative Talks: New Mobility & Mobility Justice
Wed Oct 3 | 9:00am
As part of The Untokening's Transformative Talks webinar series, I joined Dr. Do Lee and Dr. Mimi Sheller to discuss how to hold space for mobility justice in the face of new pressures from the transportation industry. 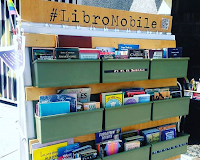 Bicycle/Race at G&O
Sat Sep 22 | 6-8pm
G&O Family Cyclery | Seattle
I read from Bicycle/Race and talked about street planning, BIPOC organizing, and how I wish I'd been to places like Kampala. 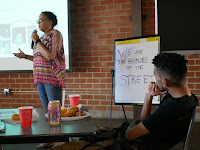 Legacies of the Street
Sat June 9 | 3-6 pm
New LA Charter Middle School | Los Angeles
At this multimedia happening, we envisioned the past, present, and future of mobility justice along the 10 freeway corridor through West Adams/Mid-City. Legacies of the Street was the culmination of a year-long conversation with West Adams resident Yolanda T. Davis-Overstreet (pictured at right), with participation from Monique G. López of Pueblo and vocal artist Vera Lugo. Learn more about the event here.
Funding generously provided by Cal Humanities and event production by Dr. Sarah McCullough. 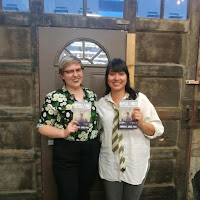 LiveMove at University of Oregon
Wed May 9 | 6-8 pm
Sam Bond's Foundry | Eugene, OR
I gave my first reading from my new book Bicycle/Race: Transportation, Culture, & Resistance

March 2016. I was a panelist on an Alliance for Biking & Walking distance learning webinar focused on "Active Transportation and Anti-Displacement." The organizer, Naomi Doerner, posted takeaways from the discussion on Streetsblog USA.

2015. “Multiple Worlds, Shared Streets: A Cross-Cultural Approach to Sustainable Transportation.” Invited by LiveMove and the University of Oregon Center for Latina/o and Latin American Studies, Eugene, OR, April 16.

2013. “Bicycling and Culture Change: Experimenting with Life in the Street.” Invited speaker at the Global Professions/Global Actions Series, University of California, Riverside, April 18.

2012. "Bikes, Bodies, and Public Space: The Role of Human Infrastructure in Urban Transport." (Scroll down at link for audio file). Invited speaker at the Center for Transportation Studies, Portland State University, Portland, March 16.

2016. Chair, “Bicycle Justice and Urban Transformation: Biking for All?” Roundtable at the Annual Conference of the Association of Collegiate Schools of Planning, Portland, OR, November 5.

2016. “Critical Sustainability as Pedagogy and Practice: The Case of USMA in Los Angeles.” Paper co-presented with Donald Strauss at the Annual Meeting of the Association of American Geographers, San Francisco, March 29.

2015. “Desire and Infrastructure: Taking the Lane in Autopia.” Paper presented at the Annual Meeting of the American Anthropological Association, Denver, November 19.

2014. “Connecting the DOTs: The Human Infrastructure of Transportation Expertise.” Paper presented at the Annual Meeting of the American Anthropological Association, Washington, D.C., December 6.

2014. Panelist, “On the Path to a Stronger Movement: Bike/Ped Equity from the Ground Up.” Pro Walk/Pro Bike/Pro Place, Pittsburgh, September 9.

2013. “Collectives and the Creative Class: Bicycling as Commodity and Practice.” Paper presented at the Annual Conference of the Cultural Studies Association, Chicago, May 25.

2013. “The History and Future of Community and Place in Los Angeles' Bike Movement.” Paper presented at the panel “Change and Continuity: The Place of Community in Transition.” Adonia Lugo, co-organizer. Annual Meeting of the Association of American Geographers, Los Angeles, April 13.

2012. “Where the Ethnographer is Infrastructure: Embodying the Boundary Between Expertise and Everyday Life in Urban Space.” Paper presented at the Annual Meeting of the American Anthropological Association, San Francisco, November 15.

2012. “Upsides and Downsides of Working on the Inside: Blogging as a Bike Activist during Ethnographic Fieldwork in Los Angeles.” Paper presented at the City as Laboratory Series at the Center for Ethnography. Adonia Lugo, organizer. UC Irvine, April 9.

2010. “Cyclists, Cycling, and the City: Identity and Mobility in a Changing Landscape.” Paper presented at the Annual Meeting of the American Anthropological Association, New Orleans, November 20.

2010. “From Observer to Ethnographer: Flânerie on a Bicycle.” Paper presented at Urbanity on the Move: Planning, Mobility, and Displacement, UC Irvine, May 21.

2016. The Untokening: A Convening for Just Communities and Streets, Atlanta, November 13.

2015. “Bicycling, Diversity, and Justice: The Opportunity and Challenge of Sustainable Transportation in Los Angeles.” Mid-semester student residency for Master of Arts in Urban Sustainability at Antioch University Los Angeles, July 23-26.