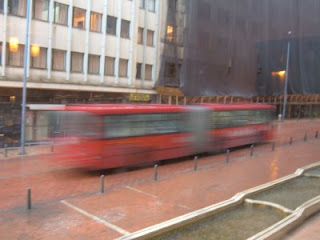 This is a bus in the famed transmilenio system, as seen from the upstairs of a shawarma restaurant on this drizzly, then soaking, Saturday afternoon. Today we got up late, drugged by the altitude, and made our way toward the city center and Parque de la Independencia, passing by a swanky university and a commercial district. We toured around the apparently closed plaza de toros Santamaria, and then went to the Museo del Arte Moderno de Bogotá (MAMBO). And what to our wondering eyes should appear, but four floors dedicated to artistic interpretations of los desaparecidos de Chile, Argentina, Uruguay, Paraguay, and Colombia (forgive me if I´ve forgotten any). It was, as Bobby described it, a real tear-jerker, as well as super depressing. Many of the pieces incorporated photos of gente desaparecido, bringing the human scale right into your face. I think the most moving piece was one organized from the archives of las Abuelas de la Plaza de Mayo, the Argentine group that tries to find the children of desaparecidos who were born in captivity. Picture: 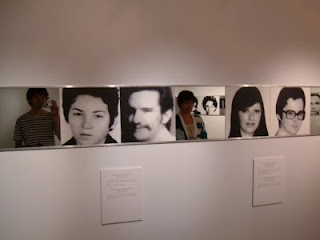 The installation was organized so that for each couple who would have had a child while in captivity, there was a series of their photos and one mirror to illustrate the missing child. We were blown away.
Then we wandered the city in a daze, ending up on a seedy street where a maniacal teenager followed us for a few blocks past brothels and trash heaps. It took us a while to find our way back to the areas the city government would probably prefer for tourists to frequent. Then we took refuge in the shawarma shop, and after eating a big plate of meat and fries covered in tahini, we got soaked coming back to the hostel. Now my pants are dry and I´m hoping the rain has let up so we can go ride the transmilenio.
Posted by urbanadonia at 3:25 PM