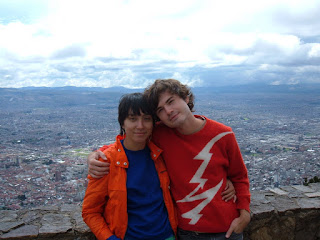 Here we are on top of Monseratte, which is the one really touristy thing we did. You can take a Teleferico (tram) up there that is pretty fun, with a superb view of the city.

In summation, Bogotá is a pretty amazing metropolitan city, with lots of interesting architecture, food, art, museums, and concerts. enjoy!
Posted by urbanadonia at 2:32 PM