We visited San Diego last weekend with our bicycles. Our plan had been to ride down from San Juan Capistrano, covering about 60 miles on PCH, but due to heavy rains we took Amtrak instead. Due to the fact that we traveled on Thanksgiving, it cost $22 apiece to get from SJC to San Diego. Normally it costs $15. Fortunately we were couchsurfing, so that was our biggest expense for the trip.

Free amusements:
- The Timken Museum at Balboa Park truly is one of the best little museums I've visited. The building soothes the eye if you're into the midcentury aesthetic like I am. Also, you can buy slides of your favorite paintings to take home with you. Brilliant! 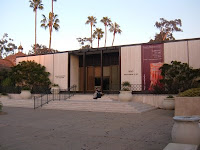 - There is a surprising amount of bicycle infrastructure along the border fence area. We rode from where we were staying in Golden Hill down to the Coronado ferry, and then rode down Silver Strand to Imperial Beach. 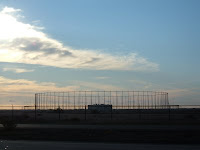 From Imperial Beach we followed signs to the Tijuana River Valley, a nature preserve along the border. I'd always thought of the no-man's-land between the countries as a patch of dirt cluttered with Border Patrol vehicles, but it's actually a wetland cluttered with Border Patrol vehicles and horse stables. It had rained recently, which meant the dirt roads crossing the river's branches were mud city. The bikes did alright, though my sweater got spattered. Only one Border Patrol officer stopped to ask what we were doing riding our bikes down there. I think he was bored rather than menacing, and then was kindly enough to give us directions. Once you cross the Tijuana River you hit Monument Road, which leads west to the park on the beach where you can see the border extend into the ocean. Bobby heard somewhere that sometimes people play volleyball over this barrier in the water. I'm skeptical. We couldn't find out, though, because that park is only open on weekends, and not on weekends when it's been raining because of overflow from the TJ River. The overflow that was now all over our bikes and backs. Monument Road leads east to the San Ysidro crossing. We turned right onto some suburban road that had a bike lane, and that wound along the border fence so close that we could see traffic on a hill road in Tijuana. This road took us through a very congested area of big box strip malls, bloated with drivers seeking Black Friday deals. One of them veritable orgies of consumption. The unusual feature was not the presence of the rabid consumers, but the bicycle lane. I had heard about a bicycle crossing at San Ysidro, but I didn't realize there would be infrastructure all around the border area. We were the only ones using the lane, anyway. It was about 5 pm once we got to the crossing area, and there were some sidewalk riders, and lots of pedestrians. There's also a lot of bike parking at the border.


-We sucked it up and went on a Critical Mass ride that started from the science museums at Balboa Park on Friday night. There were many kinds of riders, from Fixie Fashion Handles to Rusty Cruisers to Rockhoppers. We dropped out pretty early on because nature called, but while we sat outside this big box strip mall in Fashion Valley, three different people commented in a friendly way about the ride they'd seen go by. I'd always thought that Critical Mass mainly left a bad impression on the people who saw it pass, mainly the drivers who were outraged by having to stop for bicycles, but it seems like it actually can be a positive thing.

-Hills. San Diego sits on hills, cliffs, and valleys. If you go anywhere, you go up and you go down. The up part is harder, obviously. My gears got a real workout, flipping around to suit the rapidly changing incline the bike rolled against. It was exhilarating, if exhausting.
Posted by urbanadonia at 9:26 AM