One of the first things I noticed about Los Angeles is the hyper-abundance of billboards. Everywhere you go there are huge billboards looming over you. Apparently this is the result of the most lax billboard and advertising regulations in the country, as the group Ban Billboard Blight will tell you. I am interested in the infrastructural form that this advertising takes, and how they are integrated (or not) into the urban landscape. 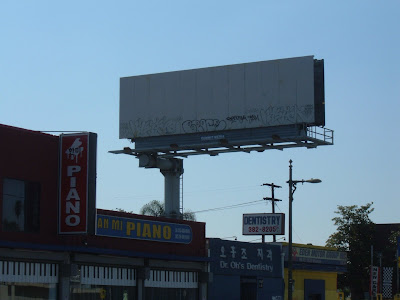 The most common design is the monopole billboard, which are present at almost all of the strip malls that line the streets of LA. The monopole billboard requires only a few square feet of space on the ground, but then cantilevers it's rectangular form over parking lots, sidewalks, and buildings. It essentially allows a billboard to be placed anywhere there is airspace, regardless of what is under it. This results in the strange situation of walking under these massive advertisements on a daily basis. Since the pole enters the ground at only one point, this gives the structure freedom to go almost anywhere. 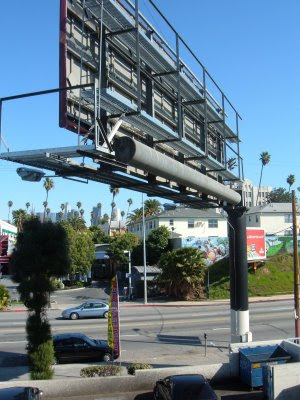 The billboard also has a certain amount of structure associated with it, it is not just a sign. It needs a platform for workers to stand on when changing the sign, as well as metal girders and structure to hold the heavy vinyl image up. When driving down the street you don't really notice these elements, but because these billboards often stuck in pedestrian environments, you are confructed with their infrustructural complexity and mass. For example, I took this picture from the second floor of a strip mall of the back of a billboard. This giant mass looming over the parking lot certainly dominates your view from this perspective. The aggressive cantilever that most billboards have adds to their ungainliness, as they look very unbalanced. This extreme cantilever is why the main pole is so large in circumference. It needs to support the very unbalanced load that is pulling down and to the side. 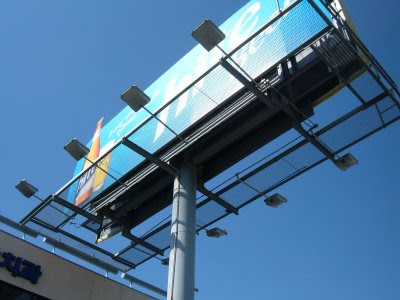 With this billboard you can see that the main support is much smaller because this billboard is actually balanced over it's support, instead of cantilevered to the side. Note again that from the pedestrian perspective the infrastructure of the sign, rather than the advertisement dominates. The worker platform, lights and girders dominate from this perspective.