I've been knee deep in kittens for a while now. Case in point: 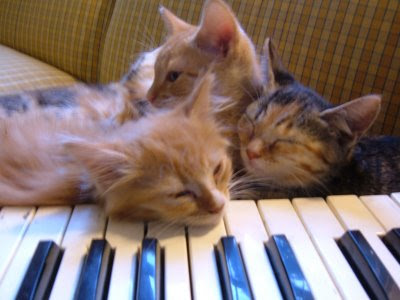 Here are Cholla, Borrego, Wolf, and Rinault all snuggled up next to my neighbor's vintage Arp synthesizer. These baby cats are hipsters already!
Yesterday I patronized not one, not two, not three, but four businesses along Sunset in Silver Lake and Echo Park. In SL, Bobby and I dined on delicious yums at Tacos Delta, then scooted down the bike lane to Masa in Echo Park. They served us a tasty riesling and then we headed across the street to El Prado for beers. I've been in a real wheat beer mode of late, enjoying all kinds of citrus finishes. After that, our two companions joined us back across the street for pizza at Two Boots. There we talked about this strange phenomenon where most of the young people we meet in LA are familiar with New York, and are always sizing this place up to that one, but in NYC rarely does one meet someone who has something other than a caricature of Los Angeles in their minds. Go figure.
Today I went to a special meeting of the city council's Transportation Committee at City Hall. Outgoing committee chair Wendy Greuel had convened this meeting to address bike issues, mostly, and a lot of bicyclists showed up to make public comments. The main issues at hand were LADOT's flawed bike master plan update, LAPD's misconduct toward bicyclists (but they didn't bother to show, so that was pretty one-sided), and funding issues around bike programming in LA. I was thrilled to hear multiple people mention low-income cyclists in their comments, focusing on this much-overlooked group in discussing the dangers of riding on the sidewalk and a need for Spanish language education and outreach. It felt lovely to hear others voice the same concerns I have. I used my public comment time to urge the city council and LADOT to be innovative and find ways to funnel funding for low-income families toward bike education programming. Really, I don't think these bodies make the connection between Obama's "green ______" attitude and the fact that encouraging cycling is about as green as you can get.
After three hours of presentations and public comment, we all escaped the committee meeting room and, based on a tip from a nice man in an elevator, I spent time looking at historical photos of LA on City Hall's fourth floor.
I spent some time reading a book in Bowdon Square, which sits right next to City Hall, has a lovely view of downtown and many jacarandas for shade, and is overall rather charming.
Lunch came next, deep in the heart of the gentrifying Toy District at Urth Caffe (where the service is awesome and the food is not too pricey, just sort of), followed by another delicious wheat beer (Franziskaner this time) at Wurstküche on 3rd Street. That place had much more seating and tastefully minimal design than I was expecting. Finally a big beerhall that's not dark and gloomy!
Now I'm back in the land of Cat, working on a grant app.
Posted by urbanadonia at 6:04 PM