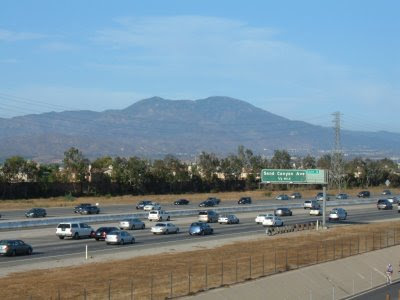 This photo, which I took from a bike path in Irvine, pretty much sums up south Orange County for me. In the background you have the base, which is a naturally splendid environment bounded by Saddleback Mountain to the east and the ocean to the west. Next, oodles and oodles of subdivisions, each more stuccoed than the last, housing hundreds of thousands of families. And then, of course, the freeway. This is the 405, a few miles from its joyous reunion with the 5 at the gridlocked junction known as the Y. Next we see a channelized waterway, and last is a regional recreational path. Does this picture illustrate "the good life"? Are there people who find satisfaction in having their homes look exactly like their neighbors', who prefer freeways and windy subdivided municipal roads to urban grids, who don't mind taking walks and bike rides along strange, frozen waterbeds that lie next to manicured lawns, chlorinated pools, and paths that try to be whimsical in their curving?
Of course! This was my view if I turned my back on the freeway scene in the last picture. I like the primary colors and the sweeping brown hills.
Later, from the Irvine train station, I had a fantastic view of Saddleback Mountain. Houses haven't yet crept up the side of the mountain, but I wonder if they're in the works at the Irvine Company or Rancho Mission Viejo, two large landholders in this part of the world that have devoted themselves to maintaining old timey, ranch-ish images while burying land under profit-'sploding McMansions. 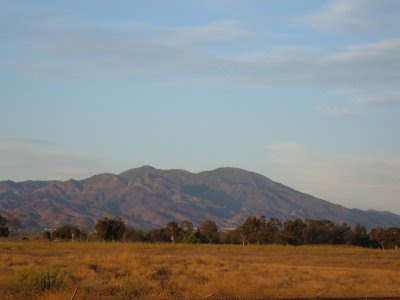 Suburban melancholy aside, later when I got home to LA I figured out a nice way, using patented Bobby technology, to secure my bike on the Red Line. I carry an innertube on my bike rack because it is handy for tying things down, and it also works as a securement device. 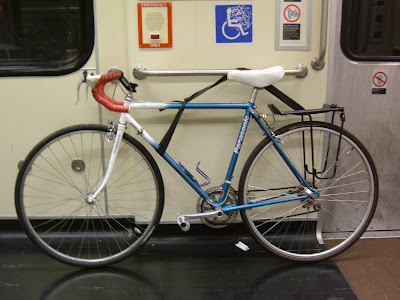 This way I could sit down and try to read a volume on the ethnography of walking instead of straining my arms to reach the overhead railing and bucking with each rumble of the subway in its flight down the tunnel.
Posted by urbanadonia at 11:59 AM