Riding through downpours in two states

Now I've gotten soaked on my bicycle in Chicago and Milwaukee. Getting soaked in Milwaukee was way better, cause I was much closer to my hosts' house and am now sitting dry and warm in their cozy kitchen. In Chicago, woof! what a nightmare it is to be drenched miles and miles from where your dry (but very dirty) other traveling clothes are hiding. We visited the Chicago History Museum on Friday, having stayed the night in Rogers Park at the Roost, a small intentional community up there. We started the day with a very nice cat named Hazel, and then moved on to the Heartland Cafe for breakfast. I hear it's a local icon, and I can vouch for their breakfast burrito. We took the Red Line down to the Clark station, and rode the few blocks to the museum from there. It had started raining a bit, but a warm rain that we didn't mind very much.
Hours later, having walked through every cheesy exhibit in the museum (industry! creativity! crisis! IS Chicago!) (I liked it though, especially the parts about the Haymarket Affair and the race riots of 1919. Although they did pretty much gloss over the bad stuff about exploiting workers as exposed by Upton Sinclair in The Jungle in favor of celebrating the revolutionary development of ways to process kajillions of pigs in one place. Build me a theme park ride based on The Jungle, and I'm yours. What a missed opportunity), we finally left to face the steady sheets of rain pouring down. Not far from the Gold Coast area where the museum is situated lies one of Chicago's hipster districts, Wicker Park. According to the bike map, it wouldn't take us long to bike over there where we could find some tasty lunch. So we started riding, and it just felt awful. We got soaking wet pretty immediately, with disgusting grey water thrown on us by passing cars and hurled onto our backs by our own fenderless rear wheels. By the time we made it to Earwax, a circus themed diner, I had to peel my wannabe windbreaker (not at all waterproof) off of myself and squeeze the cuffs like sponges. Then I shivered through some pulled pork (no coleslaw!) and ice cream and then we went across the street to Myopic Books to try and warm up. It wasn't actually cold out, though the soaking had lowered both our temperatures and the ambient temperature a little bit. The bookstore, while obviously beloved and full of character, did not offer much in the warmth department. I sat my damp self on a couch for a while and then bought a book to make up for the fact that I'd left a strange watermark on a cushion.
Okay, so you can't take bikes on the L between 4 and 7 pm, and it was like 6 pm when we left the bookstore to make our way back to Hyde Park, so we found a bus. Two buses and an hour and a half later, we finally made it to our dry clothes.
Contrast to this the Milwaukee situation, wherein we rode over to a lovely beach on Lake Michigan, splashed around in the freezing water, and then left as a thunderstorm was beginning over our heads. We rode about five miles through the storm with no incidents, and, like I said before, cozy kitchen etc.
I think I like small cities better than big cities. Milwaukee does remind me of my darling Portland, what with its nice cafés, good local coffee, and tattooed bike activists of my generation. Oh yeah, and this too: 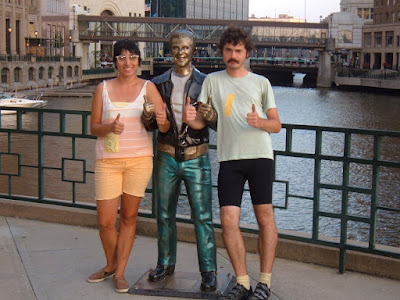 Milwaukee gets SIX THUMBS UP
Posted by urbanadonia at 2:30 PM