This weekend Mark Lakeman of Portland's City Repair will visit LA Ecovillage. He's giving a talk on Friday, and helping facilitate an intersection repair project on Saturday. Details here. I first learned about City Repair in 2006 when I took a video editing class at Portland Community Media (PCM), the cable access organization. My group decided to create a short documentary about City Repair, whose big street paintings and cob benches dot Portland. I was most familiar with the stuff near the Pied Cow off Belmont. Class time ran out, and we never finished the piece. What stuck in my mind was the new editing techniques I'd learned rather than City Repair and its mission.

However, now that I live in LA, and have become much more sensitive to community-building as a pastime and goal, I think City Repair is a great organization.

In Detroit you can visit something that reminds me of City Repair, though it is one man's vision as opposed to a neighborhood creation. Tyree Guyton grew up on Heidelberg Street on the eastside of Detroit, watched it fall apart as people moved away and houses came down, and twenty years ago started turning his block into an art piece called the Heidelberg Project.

Bobby and visited the street a few weeks ago, and were surprised to find that Guyton himself hangs out there and attempts to stage interactions between different types of visitors. His project embodies the DIY spirit, and that's his take-home message too: don't wait around for the government or anyone else to step in and solve your problems, do it yourself.

The project itself features re-used building materials, industrial byproducts, houses made into 3D canvases, stuffed animals, and so forth. 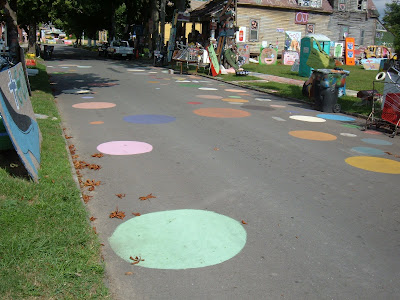 And here's me and Tyree: 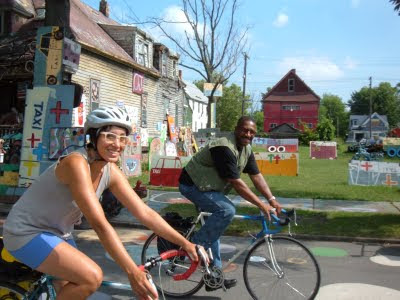 He and his photographer were tickled to hear about our bike trip, and when I asked Tyree if I could get a picture with him, he insisted on hopping on Bobby's bike.
Posted by urbanadonia at 9:10 AM