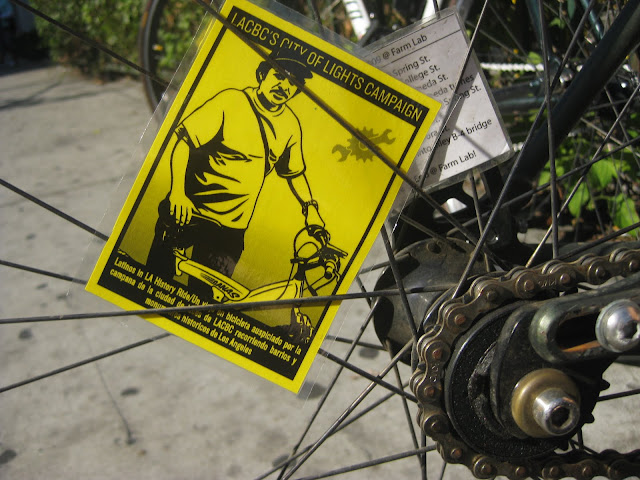 On Saturday City of Lights held its first group ride with participants from the CARECEN day laborer center near MacArthur Park and the IDEPSCA center in the garment district.

Our spoke card graphic, which I really really like, was made by artist Ernesto Yerena, a rising star who has collaborated with Shepard Fairey, among others.

Group rides have a special place in the hearts of the LA bike scene. From their start with Critical Mass, to the ongoing fun of Midnight Ridazz, group rides offer novice and experienced cyclists alike an opportunity to ride around and own the city together. Personally I prefer daytime rides to nighttime ones, since I like swooshing silently through the quiet streets with my panoramic views of downtown LA after dark, and I don't like facing aggressive drivers during the day. So I appreciate opportunities to ride en masse while it's bright out.

Our thinking with this ride was to use a popular model from the bike community in LA, the group ride, as an outreach tool to make stronger connections with cyclists who don't usually ride for fashion and fun.

My assignment as a City of Lights organizer was to hang out at the IDEPSCA center until the ride arrived from its starting point, CARECEN. I sipped coffee with another ride participant, an REI staffer who came all the way from Huntington Beach to ride with us. We chatted while the TV played coverage of a professional bike tour, entertaining the ten or so men sitting in the center. I got a brief lecture from someone about the benefits of green practices (I tried to explain to him that I live at an ecovillage, etc., but he just wanted someone to talk at, not with), and then Ernesto, the staff on duty, told me about an upcoming silkscreening workshop they're going to hold to raise money for jornaleros (day laborers) to join a soccer league.

Then I saw a bunch of cyclists ride up to the center's storefront, and the day had begun.

Here's a picture of the ride just before we started out from IDEPSCA's center at 18th and Main. 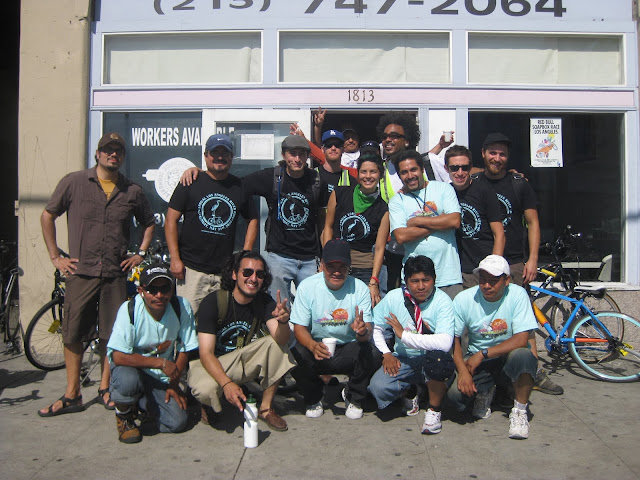 (I was filming the scene from across the street, so I didn't make the picture.)

We had ride support from the Bicycle Kitchen, with cooks Arlen, Scott, and Pedro helping out with flats.

We rode through downtown on Main, stopping at Placita Olvera for a brief historical overview from a docent. 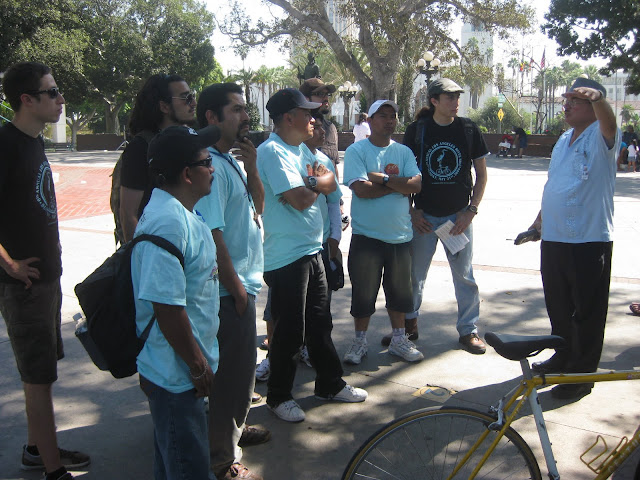 Then we crossed the river and made our way to Mariachi Plaza in Boyle Heights, where we pooled our resources and paid a few performers to serenade us with "Cielito lindo." 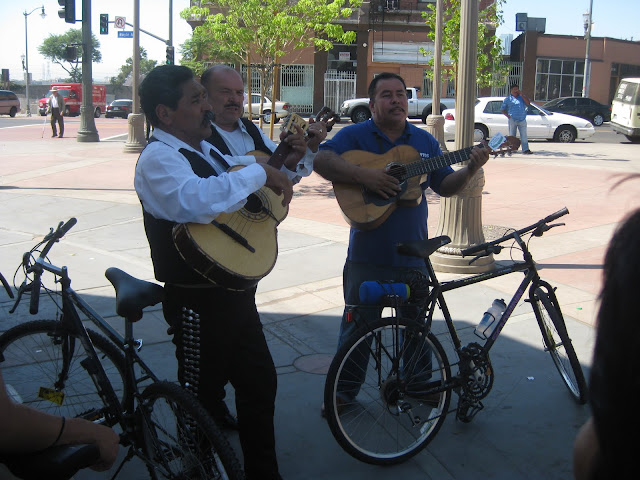 Since this was our first try at organizing a ride with jornaleros, the ride organizers planned just a few stops. So we ended after Mariachi Plaza at Hollenbeck Park, where City of Lights organizer Andy had prepared a feast! 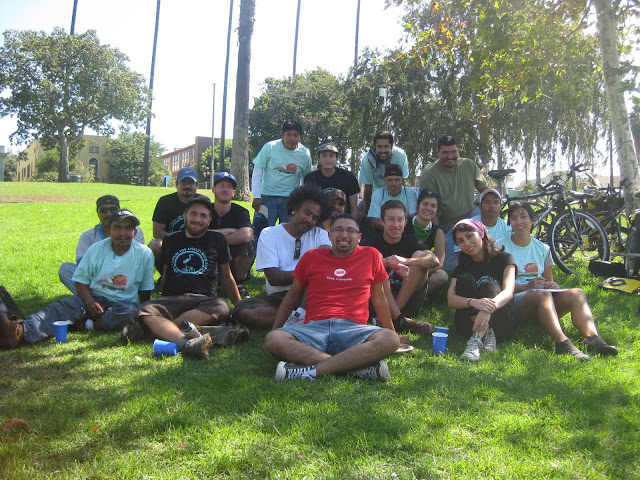 I filmed some short snippets of interview with a few guys who shared their thoughts about the ride. Everyone had fun, none of the jornaleros had been on a group ride before, and new group ride enthusiast Daniel suggested that our next one take us to the beach! Great idea.

We rode home over the 6th Street bridge and swam through traffic downtown because of the big corporate sponsored event going on this weekend. 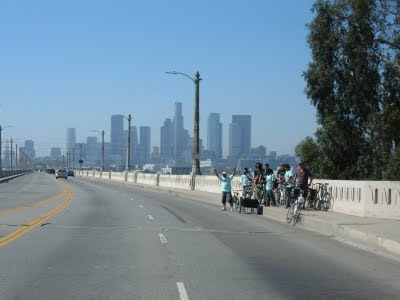 Since my next big project for City of Lights involves collecting ethnographic interviews with program participants, I made arrangements to start a Spanish/ English conversation exchange with one the riders. That'll kick my university Spanish into street gear!

I'm happy to be part of such a cool team as the City of Lights organizers. At first Allison and I had a hard time finding volunteers who were both bilingual and understood that it was not our intention to belittle cyclists of circumstance because their bikes were poorly maintained or because they ride "wrong," on sidewalks. It's exciting to be part of this not only because we're making our own opportunities for urban cultural exchange, but because I'm part of an activist project that has anthropological convictions at heart.
Posted by urbanadonia at 9:53 AM