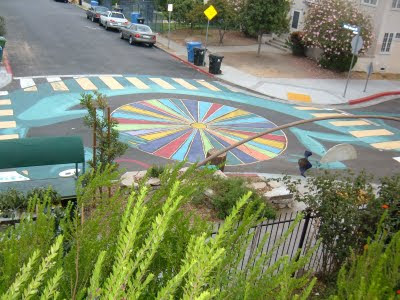 On Saturday our neighborhood got together to paint the street outside the ecovillage, with inspiration from Mark Lakeman of Portland's City Repair.

I wasn't really sure how many non-ecovillagers would show up, since we're actually not that well known in the neighborhood. It turned out that a few people had gone door to door in the week leading up to the streetpainting day, and had let neighbors know that we'd be hosting a fun event for kids. So the kids showed up in force! I hung out with three siblings whose grandma lives across the street. They enjoyed my cats, the fish in our lobby's aquarium, and the chickens in the courtyard.

My neighbor Kathy took a lot of pictures of the process, which can be viewed here.
And Erik Knutzen wrote about the day here.

We painted for hours and hours. There were tasty vittles available, and I didn't even notice that I was straining my muscles by squatting for hours at a time while painting a new streetcar line where the old one used to be. I made a brick stamping device from foamcore, an old broom handle, corduroy, and a lot of duct tape. Behold the results: 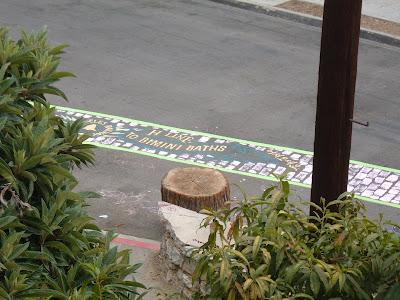 My neighbor Joe wrote a good description of the old H Line that ran down our street from 1920 to 1947. The lettering was done by another neighbor, Kwan Wu, who is currently studying signmaking at LA Trade Tech.

The trolley tracks connect up with the main design of a lizard DJ'ing on a bike wheel through a really neat wave section: 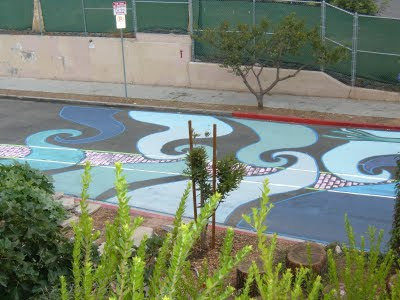 At the top of that picture you can see the green tarp enclosing the lot that will soon be a community garden, thanks to the efforts of ecovillagers and others who lobbied LAUSD to reconsider their plans to put in a parking lot on the site.

At the end of the day we decided to use an old coffee cart as an experimental free store outside our main building, moving all the things that had been gathering dust on our free table out there. People have already been taking things, which is good.

It was a lot of fun taking over the street and watching kids play wherever they liked. You do not see kids playing outside in our neighborhood until there is a space created for them (and their parents) to feel safe. Many drivers use our little two block street as a way to avoid traffic on Vermont, and gun their engines through the piddly stop signs that are meant to calm them down. Ecovillagers are now committed to reclaiming the street as often as possible, and have already shut it down again for a potluck since Saturday.

And now for that other way to use public space: fill it with cars. The Brewery is an arts complex in Lincoln Heights, just NE of downtown LA. I'd heard about it for a while, and we rode there for a friend's birthday party after Saturday's painting was done. Since the space is a converted industrial facility, I assumed there would be a visible emphasis there on sustainability as an aesthetic principle. Not so, unfortunately. The place is a fortress, with inward-facing units, and the courtyard is full of cars. There wasn't even bike parking, we just locked up to a rail. I could see some artists hanging out in their doorways, trying to experience the "colony" aspect of the place, but with so many cars parking and parked in front of them I don't see how they can even make eye contact. Maybe some artists there will soon revolt and be like, huh? Why should our courtyard be given over to cars? But I guess that explains how they can have lofts for $2,000 in somewhat ungentrified Lincoln Heights: secure parking for the Benz.
Posted by urbanadonia at 10:41 AM