I was idly reading a book when I heard Adonia in the kitchen exclaim in increasingly incredulous tones "what the fuck... what the FUCK??" She then invited me to guess what was in the toaster. I peered in and spied a blackened mass. Fearing the worst (fried mouse or giant cockroach), she rattled it out to reveal a mostly melted kryptonite bike lock key: 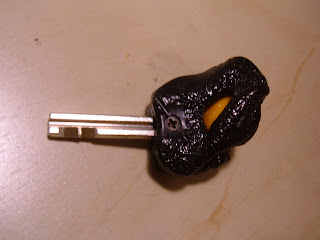 We have two working theories. The cats like to carry small objects around, so it is conceivable they could have moved the key. However, they are not known to frequent the counter the toaster is on. In addition, even for a cat it seems ridiculously idiosyncratic to drop a key in the toaster.

The second is that in the hustle and bustle of moving last March, the key could have been jostled into the toaster. This seems slightly more likely, since we were moving only a few blocks and moving with great haste (1 minivan, 6 hours, a Gadda-Lugo record). Since we did zero packing ahead of acquiring the services of a minivan, we were creating bizarre packages of objects. The toaster could have been thrown in a pot that also had a small cactus and a bowl of loose change and keys in it.

This leaves the troubling implication that it has been melting in the toaster since March, and that we did not notice the fumes of plastic and batteries melting (it's the kind with an LED light built into it), potentially consuming trace amounts of burnt plastic in our toast. On the upside, the key still works, so now we have a backup for that key if I manage to lose it.
Posted by Bobby at 12:06 AM