(That's "Santa Fe" to those who do not speak izzle.) 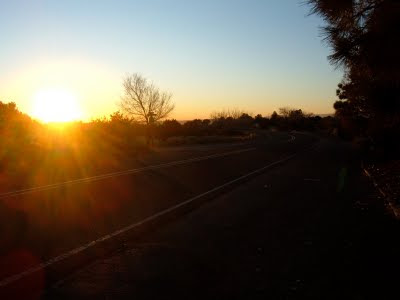 We've been riding around in the heart of a mecca for bourgie m'er-f'ers. Santa Fe does not sit on a grid for the most part, its narrow streets radiate out from the Spanish colonial plaza, but it's been a very pleasant city to explore by bike.

Amtrak's Southwest Chief carried us overnight from LA to Albuquerque. Then we detrained and saw this, which alarmed us slightly: 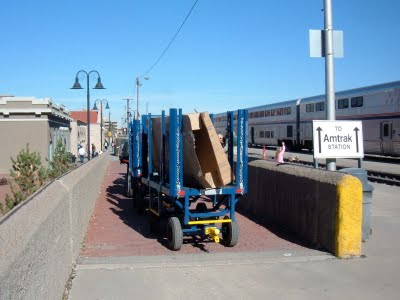 Bike boxes aren't supposed to come open during transit, so it seemed Bobby's bike might have been again smooshed. Fortunately it only suffered additional bending to the rack that they'd bent last time we took our bikes on the Chief.

We toured Albuquerque for a few hours. A lovely friend happened to be home for Thanksgiving and met up with us, introducing us to the state cookie, the biscochito. It's not a delicious combination of biscuits and cheetos, but rather a crispy sugar cookie with tones of anise.

The Rail Runner ferried us up to Santa Fe later in the afternoon. This train is a lot like the Metrolink commuter trains I ride in Southern California, except with a heaping of regional idiosyncrasy. The seats are bright red, and the Looney Tunes' roadrunner sound (meep meep) plays as the doors close. Plus, unlike Metrolink, it's super cheap; it only cost us $5 apiece to travel the 70ish miles between Albuquerque and Santa Fe. On Metrolink that trip would cost something like $12, which is the price to ride between LA and Oxnard, roughly the same distance apart as the New Mexican cities.

The bike securement system on the Rail Runner is not as easy to use as Metrolink's, though.

Once we arrived in Santa Fe, we started reveling in visiting a city on such a different scale from LA. The distance from the train station to my sister's job? Like a block. The distance from my sister's job to her house? Maybe eight blocks. The distance from her house to the Plaza, the historic city center? Around nine blocks. Perfect for biking! Drivers have been courteous, too, except for one society-looking lady from Colorado who'd probably knocked back a few too many appletinis before she drove back to her luxury accommodations.

This place is full of what Bobby has termed "fauxdobes," pleasant simulacra of the pueblos that the Hispano and Anglo settlers gleefully destroyed for hundreds of years (this state's got a bloody history that gets in your face all over the place).

To escape the upscale consumption marathon of the Plaza area, we decided to bike a few miles out of town to a city park, achieving our goal of biking to hiking opportunities. Climbing hills at 7200 feet challenged me quite a bit. The nice part, though, was zipping down the highway at sunset. That's why we look so smug in these pictures, cause we felt pretty badass. 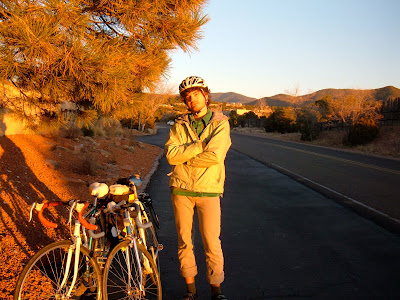 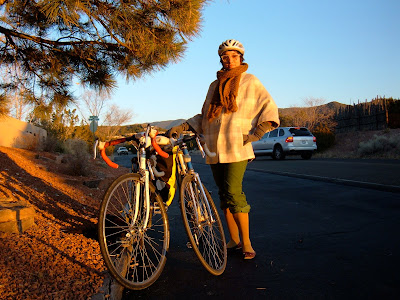 Beyond the hiking area sits a Japanese-style spa complex called Ten Thousand Waves. Having scouted the route yesterday, we made our way back up the hill today and spent many hours enjoying an outdoor hot pool, sauna, etc.

Now it's snowing.
Posted by urbanadonia at 8:17 PM