Charming City by the Sea/ Just Ignore the Homeless People

San Diego sits on a bay and looks more like San Francisco than LA. It is chock full of simulacra. A simulacrum, which I learned about through reading the wacky French theorist Jean Baudrillard, questions the reality of authentic life in that it exists as a reference to something that isn't there. I've found it tremendously useful to describe the silliness of Orange County, which brims over with themed subdivisions that use cheap stucco detailing to refer to Tuscany, Spain, whatever.

Recently I've learned about the existence of enchantment engineering, a concept urban planners use to trick you into thinking you're having a good time. Because apparently you can't actually enjoy your city, you just have to trick yourself into thinking you enjoy it. Weird stuff, especially for someone like me who works hard to unveil the interconnections of all aspects of my life.

Case in point: Old Town San Diego, a state historic park, features many old adobes facing each other across a central plaza. It's got all kinds of old timey stuff you can look at, like wagons and reconstructed interiors. The most fascinating spot, though, is the edge of the parking lot behind the adobes. People sit in traffic to find parking in dirt lots, and then they leave the everyday world to enter the realm of Old West fantasy.

If you ride a bike like I do, the boundaries between real and fake life get blurry. I use my body to propel myself through space, rather than traveling in a climate-controlled capsule from one pleasure zone to another. So when I get somewhere and need to lock up my bike, I notice that tons of space has been given over to SUVs, and that people are streaming from the very modern, congested parking lot into the quaint space of the park just a few yards away. I find it difficult to ignore the harsh juxtaposition of driving and freeway life with public spaces filled with people.

In downtown San Diego's Gaslamp Quarter, clubby club club zone 3000, ladies in micro minis and gentlemen bathed in aftershave manage to find each other sexy despite the presence of many homeless folks seeking change. Again, enchantment engineering: you have to be able to overlook the real conditions of a space; forget addressing the social problems at hand, the point is to have a good time.

When I say that San Diego is full of simulacra what I mean is that there seem to be nothing but overlapping themed spaces, where you can sit and sip your coffee while your status dog contains its desire to run around, right next to the SUV you drove there in, or down the block from the new glass and steel loft you live in, which replaced an old Victorian building infested with poor people. You can take pictures of your children in front of blooming flowers and Spanish arcades in Balboa Park, keeping this guy out of sight: 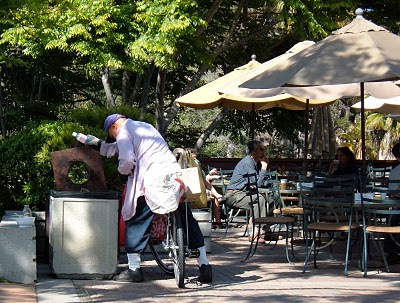 He was one of the only bicyclists I saw in San Diego who did not feel the need to be decked out in clothes clearly marked "exercise."

It seems that few people bike in San Diego, despite its lovely climate. Maybe it's because of the hills that sit under the city. People who don't bike seem to think that it's a serious undertaking, like you gotta wear lycra and you're going to sweat so hard you'll need a shower immediately afterward. That's actually not true. If you're going to ride a few miles to get somewhere, you can take it easy and enjoy yourself. Biking requires less energy than running, and there's this momentum thing that keeps you going with little ongoing effort (one big reason bicyclists tend to run stop signs; stopping and re-starting takes a lot more energy on a bike than it does when you're just lifting your foot from one pedal to the other in a car).

Driving everywhere has a really negative impact on public life. It creates interstitial zones inhabited only by the people who can't afford to drive, and in San Diego it has led to a city totally split by the 5 freeway. Its on and off ramps curl around buildings and interrupt streets. And what does an official bike route look like in San Diego? 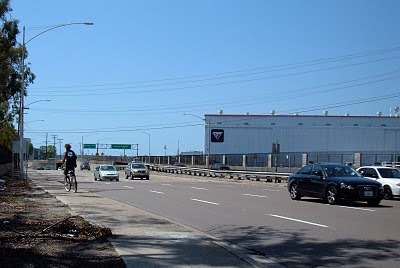 It looks like an eight lane highway, because it is one. An officially signed bike route along a high speed, eight lane highway. In a big city. Shameful. That bike infrastructure gives the city some kind of credit toward more federal funding, I'm pretty sure, and it's f-ed up that they can claim that this is a useful bike facility. Way to make biking abnormal, unsafe, and undesirable, San Diego.

More people should bike in San Diego. It's not hard, it's a good way to make a statement against oil, and, coming at you out of left field, Jesus would do it if he were alive today. He certainly wouldn't be driving a monster truck home to his subdivision in the outermost burbs where the largest LCD flatscreen awaited him, having spent the day in a simulated pleasure zone next to the freeway.
Posted by urbanadonia at 9:25 AM