In transportation circles, bike share programs are a hot idea for cities these days, almost up there with hosting ciclovias. Several US cities have installed bike share programs modeled after the Velib program in Paris, France. I happened to find myself in Denver for a business trip this week, where the largest US bike share program was installed last month. It's called Denver B-Cycle, and the bikes are still new and shiny: 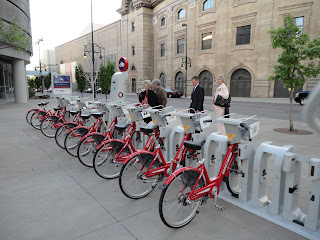 The way it works is you buy a membership (a 24 hour period is 5 bucks) that allows you to check out a bike. If you park the bike again within 30 minutes, the ride is free, but if you go over that they charge you a couple of bucks. There are quite a few stations scattered around the downtown area and into some of the neighborhoods to the southeast. The idea is to encourage quick trips between stations and keep the turnover rate pretty high. This makes it pretty cheap if you stay under the 30 minutes. It also gives a kind of unpleasant manic fervor to your ride, as once you hit 15 minutes you have to start thinking about parking it in time.
I'll admit, Adonia and I are both bike share skeptics. I tend to think that lack of bikes isn't really much of an obstacle to increasing bicycle ridership - there are over a billion bikes in the world, twice the number of cars. Most people have a bike stuck in their garage or rusting on their balcony. Bikes are cheap, lack of them is not really the problem. Car share makes more sense, as cars are very expensive, and not having to make a big financial investment in owning a car allows people to see the benefits of a car-light lifestyle. Bike share seems like a hot idea just because it is a fancy technological solution to the bike "problem". Have fancy machines on the street to rent bikes automatically! Then people will ride bikes!
So, when I was given the opportunity to go to Denver, I decided to approach it with an open mind and see if I liked actually using it. As a business traveler, I happened to fit exactly one of their target demographics, the "Mile High Visitor" (Click on the "click for examples" button). I was staying in a hotel downtown that had a B-Cycle station right next to it.
Getting a membership was pretty easy - just swipe your credit card and enter your phone number. One quibble here is that the touchscreen was pretty low contrast and required a LOT of pressure to register your presses, so it ends up taking 30 seconds to punch in your phone number. Then all you do is enter the number of the bike you want and pull it out.
The bike itself is very nice, a Trek with a smooth shifting internal three speed hub, and a front hub dynamo that automatically powers front and rear lights. To get going all you need to do is adjust the seat, which has handy quick release with an extra large lever. As I am used to riding zippy road bikes, these bikes seem really heavy and rather ponderous to ride. The sturdy front basket is handy, though, and in a pinch can double as aero bars: 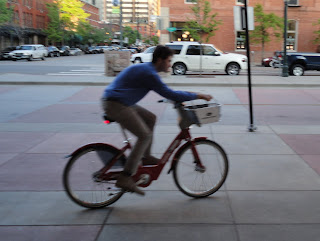 The bikes are also equipped with a lock attached to the front basket, which perplexed me at first, because I couldn't find the key. There were no instructions about how to use the lock. After a good half hour, I figured out that when you lock the bike, you turn a knob which pops out, that has the key built in to it. Having a little diagram of how this works (even just on the website!) would definitely be helpful for B-cycle newbies. The bike is also equipped with the most underwhelming bell I've ever encountered, really just not loud enough, emitting barely a "ping". On one bike the chintzy dinger had already broken off. Try again, Trek!
I used the bikes to explore the city quite a bit. It is convenient to be able to park the bike at a station and not worry about it. This allows you to bike to one destination, walk somewhere else, and pick up another bike later. This means that, unlike with a personal bike, you don't have to walk back to where your bike is locked up. This can make exploring by bike more flexible, and a benefit to bike share that hadn't occurred to me. I can also see it being handy if you live or work downtown for running errands - you could put quite a bit of junk in that basket. The annual membership is only $62, which seems ridiculously cheap to me. I would definitely buy one if I lived in Denver.
So, it sounds like I'm converted, right? Well, maybe. Since the system is so new, it remains to be seen whether it will suffer the same fate of the Parisian system, which lost 80% of its initial stock of bikes to theft and vandalism. Of course, Denver doesn't have the problem of gangs of immigrant youths burning cars, who apparently moved on to vandalizing the Velib bikes as a symbol of the bohemian elite. It will take continued investment to keep the bikes in working order, however.
B-Cycle is a collaboration between Trek, a health insurance company and an advertising company. I'm not sure what their plans are to "monetize" this system. Denver B-Cycle rounded up quite an impressive roster of sponsors and partners, such as Kaiser Permanente. The question is whether bike share is a better investment than building more bike paths, lanes, and sharrows, hosting civlovias, or even subsidizing private bike ownership. I suppose that bike share is a little more enticing to sponsors as there is something permanent they can put their name on.
B-Cycle has a "Who wants it more?" section of their site, encouraging people to vote for their city to be the next B-Cycle implementation. LA has a handful of votes for some neighborhoods. Sometimes I hear bike enthusiasts in LA advocating for bike share as the "next big thing" for bikes here. It's my opinion that we have to get more bike infrastructure on the ground in LA before bike share makes sense. Denver has obviously done quite a bit of work to reclaim their downtown and surrounding neighborhoods for peds and cyclists. Drivers are fairly respectful. I fear that installing this in LA right now would not be a big success because people are so fearful of traffic.
Overall though, I have to admit that bike share is a good idea for cities that already have a decent amount of bike infrastructure, if the funding and maintenance can be worked out. Just walking around I overheard a lot of people talking about it and the bike stations attracted a lot of attention. I did feel like kind of a dork on the bike, but after a while I enjoyed playing the part of the clueless tourist on the bright red B-Cycle. Watch out!
Posted by Bobby at 7:07 PM