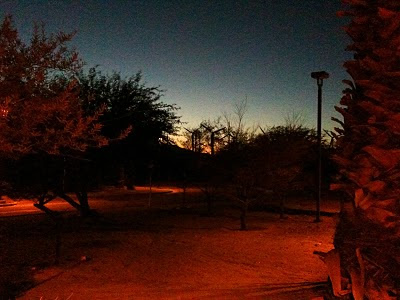 Having registered to present a paper on my dissertation project at the American Anthropological Association's annual meeting, I took the Sunset Limited from Los Angeles to New Orleans from November 17-19.

This train passes through the southern deserts of California, Arizona, New Mexico, and Texas, before heading into the drab flats of Louisiana. I was in for two nights of upright sleeping. I hoped the train would be half sold so I could get more space than I'd paid for, but she was full up. I'm not the only one who travels around Thanksgiving, it turns out.

I got a seatmate at the first stop, and learned that she had spent three days traveling from outside Atlanta to Southern California for a doctor's appointment, only to turn around and get back on the train the same day. Yikes! This lady was quite nice, and had her reasons for undertaking such a trip. She'd never been on a plane, but suffered from anxiety attacks and didn't want to subject herself to a flight. The way the train schedules work out, you have to stay overnight in New Orleans if you wish to take the Crescent further into the south, which is what my seatmate needed to do. She planned to stay in her hotel for 16 hours rather than explore the city because she expected to be a crime victim if she left the building. This reminded me of the fears Michiganders expressed when they heard that I was biking through their fair state to Detroit. Their bright smiles at the spectacle of bike tourists would disappear into masks of disdainful confusion, accompanied by warnings to arrive there before dark. I started paying attention to race after talking to my seatmate. 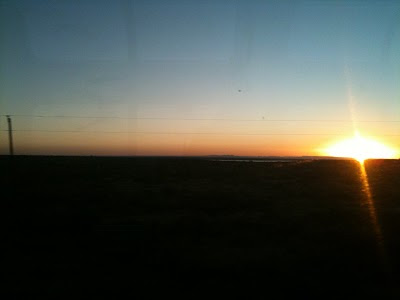 As I've written on this blog before, I find the entrenched segregation of American cities strange to navigate as a Chicana bike hipster. Would there be visible and rigid color lines in New Orleans? Would I end up biking through some dangerous neighborhood out of ignorance? Would I blend into a mass of bike hipsters in some gentrifying zone?
The Sunset Limited leaves LA around 2 pm, giving a few hours of daylight for gazing out the window. The first morning on the train you find yourself looking sleepily at the shacks of Ciudad Juarez on one side, and at El Paso on the other. For many hours through the Texan desert you skirt the border, my cell phone's occasional texts alerting me to Mexican phone company prices told me. 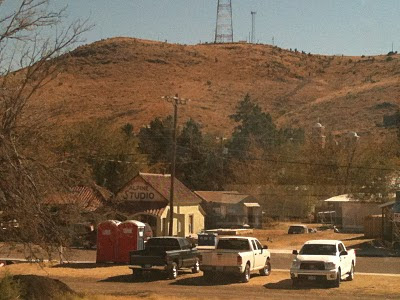 I happen to be a big fan of desert landscapes, so I found the Texas day to be quite lovely.

You pull into San Antonio around 9 pm, and then the train hangs out there for three hours. I trekked into the city's historic/ tourist district with many other passengers, looking for a coffee shop, but all I could find were corporate franchise operations. Fuddrucker's, Hard Rock, and Denny's galore! Even the Starbucks was closed. Downtown San Antonio has been engineered to enchant. There are Cinderella carriages outlined in L wire waiting to chauffeur you about, the sunken canal lined with shops called the River Walk, plazas of historic significance, and the Alamo. It's a pretty place, but it sure felt impersonal.
Around midnight we continued east, and when I woke up the next day they were calling the flatlands outside the window Louisiana. I spent the day feverishly editing my conference paper, and we pulled into New Orleans on time at 3 pm on the 19th. So would I again be an ambiguous Mexican in a land of black and white?
New Orleans has a fine old combined Amtrak/Greyhound station. 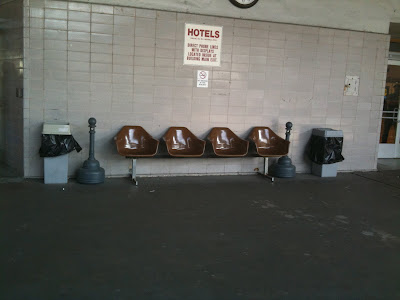 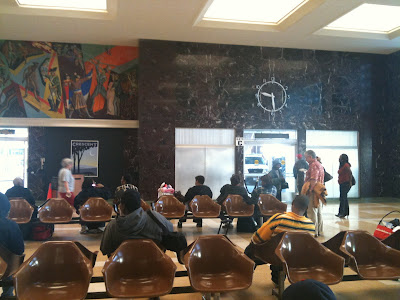 Posted by urbanadonia at 1:05 PM