I moved to Seattle a few weeks ago, in the middle of a nasty bout of the common cold. Now that its phlegmy arms have released me, I decided to take my bike out for its first spin in my new neighborhood, Wallingford.

Cue the violins of frustration. I couldn't find my bike lock keys, nowhere, no how. Look under your couch cushions for me, would you? I really have no clue where the buggers are. So, instead of going to get fenders like I'd intended, I rode down to Gasworks Park to take pictures for my new masthead. Gasworks is down by Lake Union, off the Burke-Gilman bike/ped trail. It's got a bunch of big rusty tanks, like so: 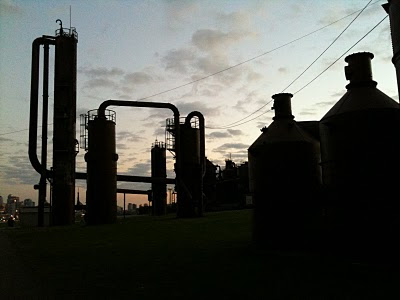 That's a sunset shot from September, when I first started visiting Wallingford. Back then I only imagined moving here. Affairs of the heart took their course, and here I am.

Wallingford shares a number of characteristics with my old neighborhood in Koreatown. I still live off a busy street with mixed use buildings, both charming, old brick jobs and newer plazas. There's still a 24 hour grocery store nearby. Bus connections are good. Plenty of pedestrian traffic, also many bicyclists passing by, on both streets.

The differences: Vermont Avenue in K-Town is twice as wide as 45th Street in Wallingford. 45th, like many streets in the area, has sharrows running up and down its narrow traffic lanes. Vermont once had makeshift "share the road" posters, most having already peeled off the electrical boxes to which some vigilantes affixed them. Two coffee shops, two artisan booze depots, four sushi restaurants, and a cupcake store? Those are on 45th. Vermont has the AA Liquor, Korean, Vietnamese, Thai, and Bangladeshi restaurants, and a 24 hour donut shop that serves coffee.

Do these descriptions get at the glaring socioeconomic differences between my old and new homes? Wallingford has a lot of families that can afford SUVs and sturdy Craftsman houses. K-Town has a lot of families that ride the bus and live in studios where cupboards won't close because the hinges have been painted over so many times. There are things that make me feel comfortable and threatened in both neighborhoods. On my new block, I'm not the only one using a tote bag instead of plastic ones. On my old block, people didn't avoid eye contact all the time.

You know what I already miss about Los Angeles? There you can be an eco activist and be part of a mestizo community, cause mixing is all around you. There are beautiful people who shift between cultural identities in a graceful, fun, and conscientious dance. I don't want to backslide into a segregated world.

Which means I've got some exploring to do.
Posted by urbanadonia at 6:14 PM