Sometimes I'm riding along on a street, and I come across a piece of bike signage so confusing that I stop and take a picture. Here are a few I took recently: 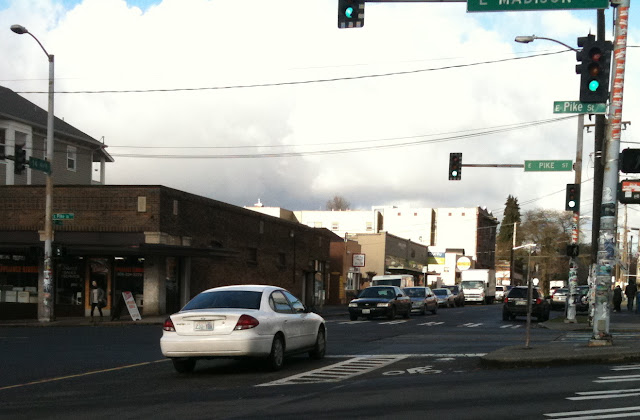 This is 14th and Pike in Capitol Hill in Seattle. The key here is that neither before nor after this separated bike area is there actually a bike lane. Once a bicyclist pulls ahead here, she will again have to take the lane unless she wants to ride directly into that parked car. It's not safe to re-merge over and over with vehicular traffic when riding a bike. Maintaining a straight line makes you more predictable to other road users, and demonstrates that the street is a shared space. For city infrastructure to ask bicyclists to remove themselves from the traffic lane in the middle of an intersection seems like a set up for conflict. 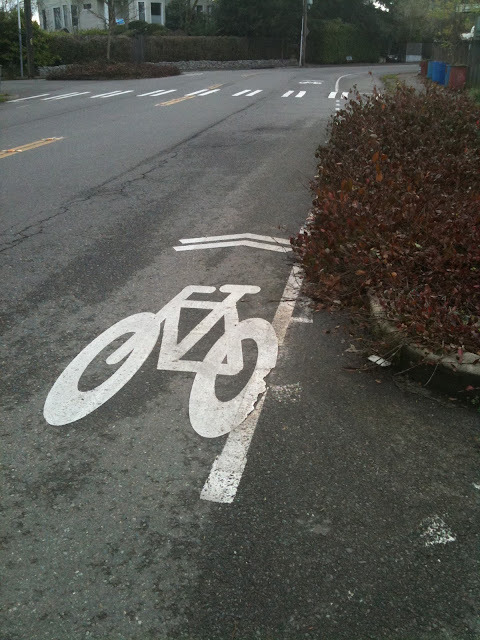 I'm certainly not the first person who has noticed the strange use of sharrows in Seattle (for example, Elly Blue talked to Seattle Bike Blog's Tom Fucoloro on the topic in November), but I just can't get over how randomly placed they seem to be. Some of them do what's going on in the first picture, where they seem to tell people to pull up to the curb at intersections (again, from a safety and traffic flow standpoint, this is a bad idea). The sharrow pictured here is on a curving street in the Mt. Baker neighborhood, and it seems to be telling cyclists that we should get as close as possible to that bulb out so that cars can more easily make the curve. In both cases, the bike signage seems to indicate that your personal safety as a bicyclist rests on you getting out of the way of cars.

Bike infrastructure should not be about keeping bikes out of cars' way.

Signage like this perpetuates an idea that motorists should be able to travel as-fast-as-possible, that biking is nice, in its place.

Our streets are dangerous not because bikes and pedestrians "get in the way," but because this as-fast-as-possible mentality makes people outside of cars into externalities.

So what should bike infrastructure do?

Bike infrastructure should make riding a bike safer and easier. Infrastructure projects that take bikes out of car traffic only to dump them randomly back in when the paint or path stops do not accomplish this.

I was biking down in Portland recently, and it reminded me of just how big I feel when I'm biking in a city that has accommodated transport cycling. My body on my bike takes up the street, I'm not being pushed to the side and allowed to travel only where it's convenient for motorists. I love seeing sharrows that are out in the middle of the traffic lane, where they should be, rather than shifting along the street according to the expected movement of cars.

When I see a sharrow painted over a pothole or otherwise leading me into a dangerous situation, I wonder where it went wrong. Was it the worker painting the thing that decided to place it there? Was it a city planner who decided to place it there? And then I think, why would a design like this get approved? Is it because the people who made the decision to install this signage weren't thinking about how bicyclists would be using it, but about how placing bike infrastructure on these streets would affect property values?
Posted by urbanadonia at 3:24 PM