Getting Back on the Horse: Guest Post by Alex about Biking Again after an Injury

A while back, I learned that two different friends who didn’t ride had lost their ability to bike due to illness or injury. Before that, they’d both been bike commuters, and one had even been employed as a bike advocate. Giving up biking was a difficult life change for both of them. Since there’s not much discussion around disability and bikes, I asked my super fun good friend Alex Cook, who stopped biking for a few months because of an injury, if she’d write about her experience. The following is a guest post by Alex, with photos by Ursula Moffitt. 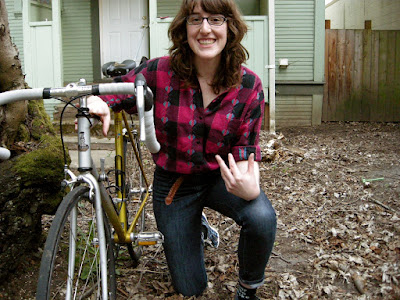 I have been an avid biker since I met Adonia in my late college years. Sure, I knew how to bike before then and occasionally did, but she showed me how easy it was to get around town on a bike and how fun trips with friends could be. In the summer, we would often go gallivanting about on bikes with an old boom box in a milk crate attached to the back of my bike. When I got a job five miles away, it was natural to me that I would bike, even though if you had asked me two years earlier I would have said that was ridiculous. At GladRags where I worked, we even won an award from the BTA (Bike Transportation Alliance) for being a small business with the highest participation rate (100% of the employees, everyday) of a month long bike to work challenge. Since Adonia inspired me, I have associated biking with freedom, adventure, entertainment, and just plain utility.

Late last spring, however, soon after I had been laid off, I broke my ankle in a silly running around accident. I soon learned that I would need to have surgery to install two pins and a plate in my right leg. I was completely debilitated and depressed. I was crushed that I could not participate in so many summer activities. Biking in Portland is fun, but biking in Portland in the summer is magical. I would even miss the annual 3 week bike festival called Pedalpalooza, which includes midnight rides, taco runs, and bike theater (my mother was very sad that she missed the naked bike ride. She slept through it while she was helping me during my surgery).

I was out of commission for around 3 and a half months. In that time, not only did I not bike at all (obviously), but I also did not move around very much and had certainly lost some of my energy, endurance, and about half the muscle mass of my calf. Biking was pretty far from my mind during the recovery process. I was scared that I would be awkward on my bike or worse, that I would re-injure my ankle. The fact that it was my right ankle made me even more nervous about biking, because that is typically the foot you use to bear the load of yourself and your bike when you stop. Additionally, by the time I was healed enough to even possibly bike, autumn had started in Portland and that means rain and slightly less fun biking and lots of wet leaves to slip on.

Throughout my injury, surgery, and recovery process, I had an overwhelming sense of dependence, which was stressful because I am a self-reliant young woman who does not feel like I should need that kind of attention. Remembering the sense of freedom that bike riding gave me, I knew I wanted to get back to riding. 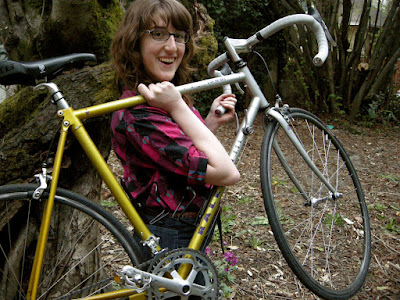 After I had ditched my crutches, but while I still had a limp, I picked a day when I felt comfortable biking. It was sunny and my boyfriend was hanging out at home in case something happened. I picked a safe street with few cars and took a short ride. It was wonderful! I had forgotten what it felt like to have the wind and sun on my face and experience the beauty of my neighborhood. It was not nearly as awkward or difficult as I had anticipated. There was still some pain in my ankle, but no more than if I had walked.

I challenged myself to longer and longer rides and was soon back to my old habits. Biking was actually easier than walking, because there was less pressure on my ankle. I felt independent and liberated from the relative confinement of my injury.

The key to biking after any long absence is to make sure you are comfortable and using moderation. Obviously, you should not do anything too physical if you are not comfortable or if your doctor has advised against it, but if you are cautious and persistent, you can regain that sense of freedom, adventure, entertainment, and utility that comes with riding a bike! 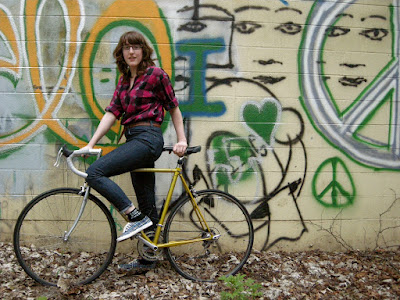 I’m really glad that Alex was able to get back on her awesome gold bike! Portland is a pretty ideal place to take it slow and get comfortable riding again, cause it’s a city where bicyclists are largely taken seriously as road users and aren’t harassed nearly as often as we are in other cities. Can’t wait to hang out with Alex on bikes again!
Posted by urbanadonia at 9:22 PM