I've gotten to know my neighborhood much better in the last week and a half. My cat is missing, and according to the Missing Pet Partnership, she could be hiding close by, under a house or in some jungly backyard. I thought I knew my neighborhood pretty well, since I walk and bike around here all the time. I didn't know the half of it! Undiscovered alleys, paths between buildings, rambling old homes subdivided into apartments, derelict houses, and quite a "cat"alogue of local beasts have been added to my mental map.

One derelict house I discovered has since been demolished. I was surprised to find an unused property in my neighborhood, which is fashionable and increasingly expensive, so I wasn't surprised when I walked past on Saturday and saw that a bulldozer had leveled the old home. The pace of change here makes it hard to feel like I have much of a say in this neighborhood. I've never owned a home, but I know the feeling of ownership because I used to live in an intentional community. It was a place that encouraged creative reuse, too, so our vision of sustainability had much more to do with recycling than with buying "eco friendly" products. I've started to realize that Seattle does not promote this view of sustainability; it's more into engineering and development as solutions to social problems.

On my cat prowl this morning, I saw this sign on a telephone pole: 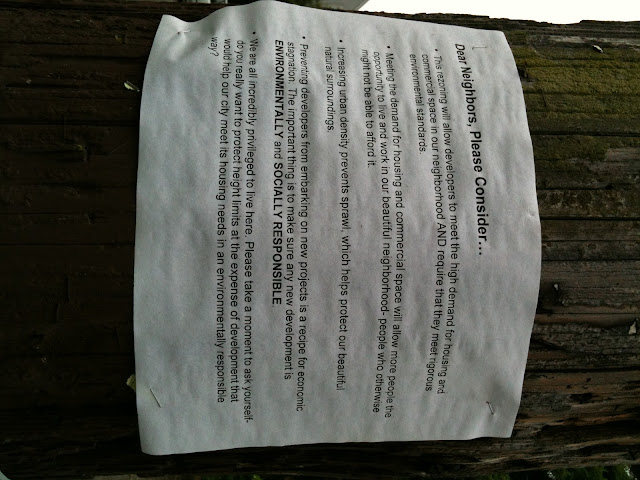 This sign follows others that people have posted this summer regarding zoning changes or exceptions in the neighborhood. The first round I saw encouraged neighbors to denounce proposed changes that would allow more commercial uses of residential areas. Ha, NIMBYs, I thought to myself. Who wouldn't love a corner store? Of course, as do many issues in this neighborhood which serves as unofficial parking for the nightclub zone a few blocks over, the struggle boiled down to parking. More stores = more people = more cars. I guess it's assumed that the subhumans like me who don't drive never shop.

The sign I saw this morning, though, has a more insidious claim. It suggests that high rise development is the only way to make a neighborhood more dense and sustainable. This seems very typically Seattle to me. Instead of organizing at a community level to promote more ecologically responsible practices, people continue to refuse eye contact at the street level and post signs that ask me to trust some developers on high to fix our problems. Not that developers have ever had anything but the public good in mind...

The thing is, the same high rise development can be two things: many more units and units with a view. The first aspect seems like a good thing, because us eco people know that densification is a good thing, right? It's easy to greenwash a project that will make one lot into multiple units (more units = more buyers = more money for the seller). It can seem like a nice marriage, where a kind of "greed is good" mentality can align with in-fill, except that those new units will most likely not be affordable family housing.

"Affordable" can mean a lot of things. This neighborhood has been seeing a lot of "affordable" SRO development, basically dorm-style housing for aspirational people who still believe that they have the Hulk-like strength to yank their bootstraps up hard enough to become Bill Gates (who grew up wealthy in Seattle, by the way), so it's ok to have a little no-kitchen action along the way. Builds character! I'm pretty skeptical about claims that new development will bring affordable family housing. And if it's market-rate housing, who benefits? Last time I checked, rich people can live wherever they want, they're not forced to stay in the suburbs because of a dire housing shortage in trendy urban neighborhoods.

The other aspect, that high rise buildings will have views, means your view isn't going anywhere, it's just not going to be yours anymore. To me, this is the weirdest feature of private ownership of urban land: the thing that gives these lots value is not the dirt under them, but their surroundings. It's the views, the amenities, the easy access to freeways, transit, whatever. The places that people build through their everyday lives, the interesting ways they use their homes and yards, the details I've been absorbing on my cat prowls, are valueless in this system. So this sign that asks neighbors to own their privilege and stop blocking development that will block their views is basically asking people to give up the things they love about their neighborhood so that private developers can sell those nice things to the highest bidder. More units + buyers who will pay more for views = even more money for seller.

Hmmmmmmmmmmm.
Posted by urbanadonia at 9:27 AM