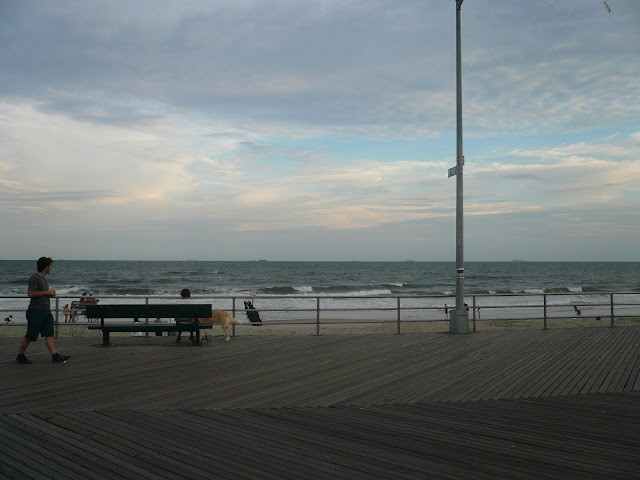 On our way to Europe, Ben and I stopped in New York City for a few days to see friends. Our first stop was Rockaway Beach, where we swam in the tepid Atlantic while tiny crabs nibbled our toes. Afterwards, as a friend drove us through East New York to where we would be staying in Bed-Stuy, we talked about how in massive old cities there can be whole neighborhoods that have been standing for over a century, and they're not landmarks, they're just worn out houses. I'm a child of the west coast, where 1970s stucco boxes reign supreme, and I still get excited when I see buildings from the nineteenth century. Of course, these neighborhoods are seen as future sites of value as future trendy enclaves, but the New York gentrification that started in the 1970s has yet to remove poverty and blight from all corners of the boroughs. How much longer will the low income communities who remain here be able to hold on when the city would clearly prefer to see property values rise rather than ensure that all families have access to affordable housing?

As we cruised down a crowded avenue, conversation in the car ceased when we spotted an amazing physical feat happening outside our open windows. A man was riding a bicycle like a unicycle, popping a wheelie and traveling against traffic in the street. His bike did not have a front wheel. Was this a person getting around in the only way he could, being creative in a way that creative class economies wouldn't value? Or was this a street clown showing off his skills?

That night, we took a walk from Bed-Stuy to Prospect Park, then cut over to the East River to see the Manhattan skyline. We saw a lot of handsome brownstone townhouses, and the sun setting behind a church. 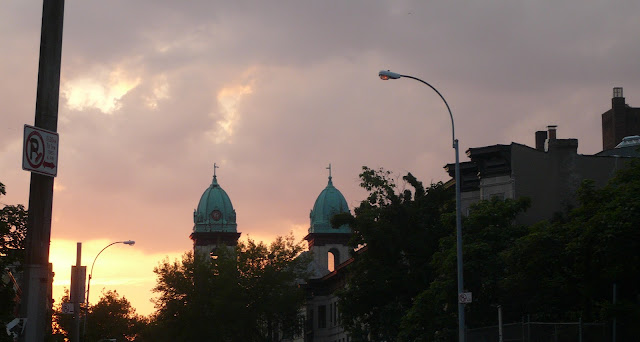 In Bed-Stuy, businesses seemed to cater to an African-American and East African clientele, and I saw a few mosques. I felt really self-conscious, trotting around in my velvet minidress with two skinny white boys. We were in a place where stark divisions between black and white made me wonder where passersby would place me, a brown hipster with a sharrow tattoo. As we walked, more and more cafés catering to people like us appeared.

When we reached Prospect Park, we stopped and talked about the separated bike lanes built around there. 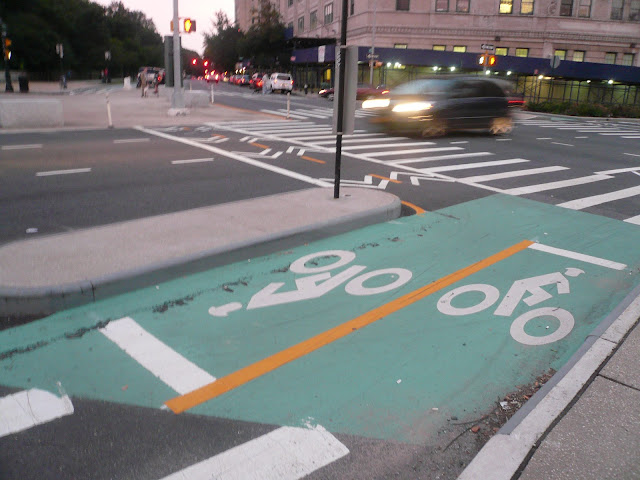 I haven't followed New York's bike lane controversy too closely, but I know that there as in the rest of the country communities have been framing bike lanes as symbols of neighborhood takeover. Seeing infrastructure that seemed to aspire to Northern European heights, I thought about what it would take to promote bicycling there using community-based methods. If the people who live in the neighborhoods where new infrastructure goes in don't admire Amsterdam and Copenhagen the way that the bike lane designers do, are those designers imagining that a different population, more like themselves, will replace the people who just don't get it?

Rather than speculating wildly about this stuff as an outsider, I met with Shelma Jun, one of the organizers behind POW! People On Wheels. POW! is a really cool bike social justice group that Shelma and Helen Ho formed after meeting at this year's Youth Bike Summit in New York, where they realized that they shared a commitment to promoting bicycling in diverse communities. Both women are urban planners, and they are working to develop community-based leadership on bike issues in communities of color.

Even though they've only been in existence since this spring, POW! has formed partnerships with a number of community-based organizations and are taking care of business. They are doing research on biking on the Lower East Side, pushing for a social equity component for the city's planned bike share program, and I was excited to hear about a photo project they've been working on to show what diversity on bikes currently exists in the outer boroughs. I'm looking forward to learning more about their projects! I'm glad that they're working on building new, community-based images of bicycling.

I was intrigued to learn that Los Angeles played a part in inspiring POW!. Shelma got her MA in urban planning at UCLA, and she said that when she moved to New York last year she was surprised that she didn't find the same connections being made between social justice and bike advocacy that she'd seen in LA. Hearing LA spoken about as a place doing good bike work makes me feel like this:

Posted by urbanadonia at 7:01 AM