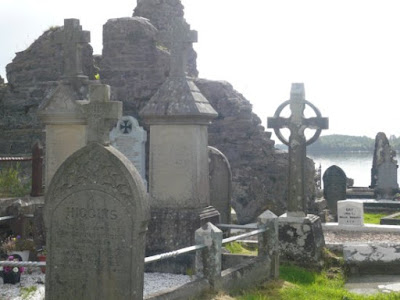 At the end of August, we took a bus from Dublin to Donegal Town in northwestern Ireland. Renting a car didn't come up in trip planning, and I had some notion that there would be ancient footpaths connecting all the things we would want to see. We discovered that getting around its environs without a car was possible, but not exactly supported.

We stayed about a mile east of the town the first night. Our lovely hostess met us where the Bus Éireann motorcoach had left us, in the pedestrianized town square. 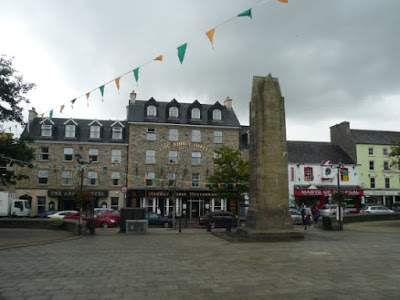 I had sent a Couchsurfing request to this particular lady because her profile said she lived in Donegal without a car. As it turned out, this did not mean that there were winding footpaths connecting all destinations; it just meant that when the sidewalk disappeared just out of the town center, we would be walking in the road. 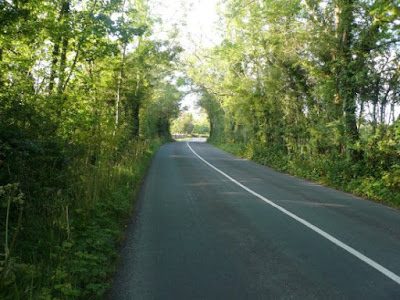 I like inhabiting streets, but since I was in a country where I wasn't familiar with transportation etiquette, I stayed close to our hostess. There were a few spots on the beautiful country road where motorists might not see us as they came around curves. Most drivers slowed down once they saw us, which made me think that seeing pedestrians walking down roads like this must be somewhat common. I didn't see anyone else walking on the road, or riding a bicycle.

Later in the evening, we walked back into town for dinner, and I felt pretty jumpy walking back through the darkness to the house. There were no streetlights, so we used our phones to alert drivers to our presence. Each time a car's engine approached, and we saw the headlights emerging from the night around a curve, I shrunk against the forested shoulder, prepared to throw myself out of the road. Fortunately I didn't need to. Our hostess told us that rural bus service is unreliable and expensive, which means that low income people like herself can't afford to use it much. Sometimes she'll get a taxi home from town, especially if she has a lot of groceries. She said she didn't have a bike right now, I think she either sold it out of necessity or it was stolen.

She told us about the government's efforts to encourage more people in rural areas to switch to sustainable transport, which I was interested to hear about because I had learned that there is more bike commuting in Irish cities than in the countryside. I can't recall seeing any transport biking in Donegal, though I did see a regional bike map on a sign in the town center. We had a good laugh at the idea of politicians taking part in a reality show where they would live without cars to see what challenges people actually faced.

The next night we stayed at the Donegal Town Independent Hostel just north of the town center. This time we had sidewalks for most of our walk, but they were narrow and the street was wide and traffic was swift. I could see why I had heard that Donegal being spread out; there didn't seem to be much reason why there was a large gap between our hostel and the town, but houses seemed kind of scattered through the fields. This is what it looked like walking into town, crossing the River Eske. 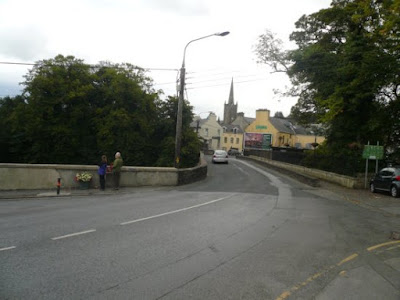 From the hostel, there was an alternate route that took us onto a footpath into town, though you had to dash across the highway and walk down a gravel residential road to get there. The path took us along the edge of Donegal Bay. 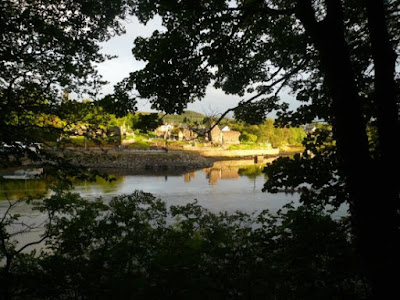 Across the bay we could see the cemetery in the ruined abbey that had been burned around 1600. The abbey, along with Donegal Castle and a boat tour of the bay, are the town's main attractions. We took the bay tour and learned that this was a departure point for people fleeing the Great Famine of the 1840s. On the bay, we could see juxtapositions of old and new, like wind turbines on distant hills behind a tidal island surrounded by a rock wall. We did not make it out of the bay, but we did see it meet the sea. 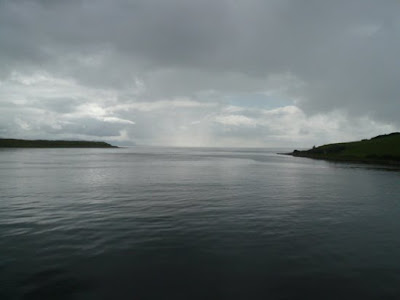 Later on our trip, I heard a presentation by an engineer who was working for an Irish government agency that had plans to develop a countrywide bike network. They will be converting disused railways and things like that. It seems like that would be a great step toward making carfree transport in rural areas into something less invisible, and thus safer and more desirable.
Posted by urbanadonia at 9:59 PM