Loving The Coast And Destroying It: A California Conundrum

The little brick cottage my great-grandmother's second husband built in Corona Del Mar in the 1940s stood for decades up the street from CDM Main Beach in Orange County, California. The two queens of our family, Grandma and Great Grandma, reigned there through the early years of my childhood, offering a safe haven to their descendants, who all needed it from time to time. The family added a new wing to the back of the house in the early 1990s to expand its living space, but the matriarchs passed away soon after, Grandma in 1994 and Great Grandma in 1996. The house was then sold, this course of action having been laid out in their wills.

It hurt when we lost the family seat. The financial compensation wasn't a replacement. But over the years, we reclaimed our sense of place on that block and on the beach at the end of the street. All of us spend time there, though we don't live in the town adjacent anymore. In late 2013, Great Grandma's house became an empty patch of dirt, and now a modernist box takes up most of the lot. This has been the fate of many homes in the area. The process goes: raze the modest bones of a cottage, manufacture some stucco palace or other, and flip it all to make a tidy profit.

When one of my cousins happened upon the patch of dirt and let the family know what he'd found, it hurt again, for some more than others. My sister put together a collage of family photos taken in front of the house with its distinctive brickwork, subtitled "the life of a well-loved house." I felt a sense of powerlessness, but when I went to the beach the next time after that and lay on the sand and closed my eyes, I heard the same buzz of planes overhead that I used to hear from Great Grandma's living room. The sidewalk on their street pushed the same roughness against my bare feet that it always had. The comfort we draw from places we made is sometimes separate from the emotional breaking and bonding that we subject ourselves to in our system where homes are commodities. One of those sources of comfort, in my life, has always been the beach.

In Southern California, we love the beach. That's something that I think gets missed oftentimes when we decry the greed that drives destructive industries in the region. We recklessly endanger coastal habitats and beauty by allowing offshore drilling, overdevelopment of fragile coastline, and today, short-sighted desalination plants that will have longterm effects. Because you don't have to be a progressive environmentalist to worship the beach. Members of mega-churches stage family portraits standing in the sand with their jeans rolled up and the family dog splashing in the waves. Central American evangelicals baptize each other en masse, robed in flowing garments and singing. Kids from Santa Ana whose parents can't afford to buy them bathing suits frolic in t-shirts and shorts. Surfers commune with the water early in the morning. We stand along the shoreline and gaze out as a pastime. It's a ritual in my family to pick up food from A's Burgers in Dana Point and drive out to the manmade island in the marina there, watching kayakers and dog walkers while we eat our dinner.

For a long time I've grappled with the car dependence that underpins the Good Life in the place I can't stop thinking of as home. I've always taken it for granted that people embrace their lifestyle's oil dependence, but with the fresh spill damaging life off the coast of Santa Barbara, I started to wonder. I doubt most people think much about oil, even when they're idling their engines in line at Costco to refill their gas tanks. I don't think people spend a lot of time worshipping the oil that powers their status machines, that fuels their arms race to get the biggest SUV so they can be voted "most likely to survive the games of swerve-n-speed on I-5." People don't have reproductions of paintings of oil rigs and oil slicks and oil spills hanging on their living room walls. What they have is pictures of the beach.

The fact that loving the beach is a normal fact of life there doesn't mean the coastline is safe. Sometimes it feels like the social contract in Southern California is
1) Live here because it's beautiful;
2) Ignore our role in degrading its beauty.
This is such an ingrained fact of life in the region that people will react on an emotional level when you ask them to use less or use differently. These are often good-hearted people who consider it correct to close their minds to the damaging effects our everyday use of resources can have on the places we love. That's why I cried as I read about the oil spill this week. The beach is not mine, really, anymore than Great Grandma's house was. Maybe one day I'll walk over and it will be another empty patch of dirt. 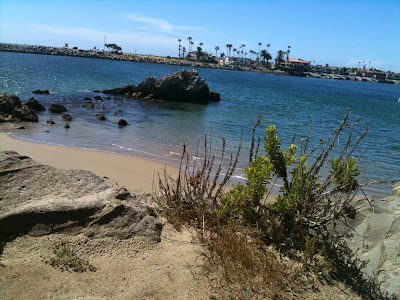 When I was home last year, I took some time to bike down PCH, enjoying the buffered space that had been created since the last time I'd explored the area. I stopped at a beach between Capistrano Beach and San Clemente, and I was horrified to find a huge number of spray paint cans and colorful plastic spheres from a ball pit washing back and forth, back and forth, tangled in seaweed at the water's edge. I grabbed a trash bag from a nearby can and filled it with as much of the toxic garbage as I could find. Then I rode away, slowly, hoping to find a cleaner stretch of sand.
Posted by urbanadonia at 9:01 AM