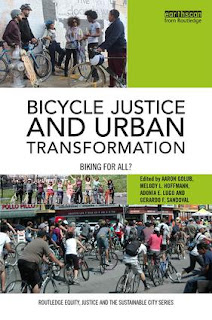 The Backstory
A little less than two years ago, editors Stephen Zavestoski and Julian Agyeman published a collection of essays called Incomplete Streets. The book argued that the “complete streets” policy and design trend could benefit from an environmental justice approach to social inclusion. It was right up my alley because at the time, in my day job as Equity Initiative Manager at the League of American Bicyclists, I felt caught in a gulf between the bike movement I’d been part of for years and the transportation justice field that had inspired me to work on race and sustainable transportation in the first place.

Practitioners in transportation justice, which has roots in the 1964 Civil Rights Act that made it illegal for federal funds to be distributed in a way that led to racial discrimination, tend to focus on public transit systems. Before I got into bike activism I’d been a member of Los Angeles’ Bus Riders Union, a groundbreaking grassroots effort that has for decades made the case that transit systems like Metro need to do a better job of serving their majority people of color and low-income users. I thought that because I was aware that the bike advocacy world did not match the diversity of who actually rides, other people working in transportation knew about this gap too. But when I brought up bicycling in transportation justice circles, I was told to take my shilling for a white man’s pastime elsewhere.

I could see why bicycling seemed beside the point. For many families, bicycling for transportation is something that you work hard to get away from, rather than a desirable end in itself. When people have a hard enough time even gaining access to driver's licenses and dealing with the issue of tickets turning into debt, I can see why owning a car is still central to civil rights projects. I’d moved to D.C. because I thought that building a racially inclusive bike movement would help transform the symbolism of bicycling, making it something more positive for more people. But instead I grew to feel invisible within my own movement, where it was controversial to simply state that infrastructure couldn’t fix the vulnerability that different people face in our unequal streets.

There are plenty of people of color working in environmental professions who sit with me in this space between ecological commitment and knowing how hard our communities have worked to achieve middle-class consumerism. Wasteful living is a sign of success. Environmental movements still have a long way to go in co-creating visions for a better world that empathize with people scarred by the hatred of poverty and racism, rather than judging them for not “going green.”

When I learned that Zavestoski and Agyeman were also on the editorial team for Routledge's series on Equity, Justice and the Sustainable City and they wanted to include a book specifically about bicycling, I signed on to be an editor of what became Bicycle Justice and Urban Transformation.

Since it’s the first book to define bicycle justice, the collection goes in a lot of directions from there. The common thread (besides bicycling) is that we asked our authors to present solutions that would make sense for practitioners.

Major themes:
My chapter in the book chronicles the othering that I experienced while working in bicycle advocacy at the national level and suggests directions for changing the movement’s agenda to include more people’s perspectives.

Bicycle Justice and Urban Transformation is a first step toward creating an interdisciplinary conversation about bicycling and inequality. I hope it can be a resource for students, scholars, and practitioners alike. Thanks again to all our authors who made it possible to get the collection out there on a really short timeline!

Posted by urbanadonia at 3:09 PM