We are now in Portland, having Greyhounded it up here last Wednesday. We've been in the midst of all the business of visiting and doing bikey stuff like PedalPalooza events. And our bikes are here with us (mine's the Panasonic and Bobby's is the Benotto), in my case for the first time since 2007. It's much nicer having my own familiar bike to ride around instead of trying to pedal some taller friend's machine.
To take a bike on the Greyhound, one must box it up. Then they charge you $35. So Bobby found out that some clever, genius neighbors at our ecovillage developed a bike bag that allows you to travel with the bike. Since it's not a recognizable bike box, you might be able to skip out on inflated transport fees, and it lets you out of the hassle of finding a bike box, disposing of it when you get to your destination, then finding another one for your return trip.
They effectively designed a ginormous messenger bag: 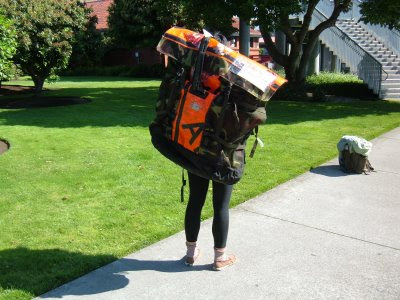 It's a great idea, but it's fallen on hard times and has a broken strap, making the weight unevenly proportioned across your shoulder.
Still, it's smaller than the bike box: 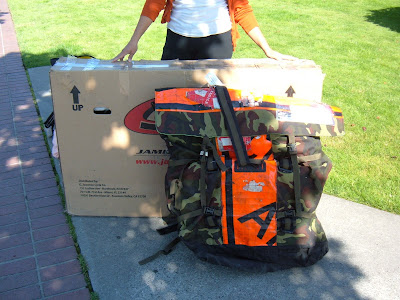 Well, anyway, the Greyhound people immediately spotted that the bag held a bike, so we paid $70 for transport privileges (still not bad!). And then once we got to Portland 20 hours later, it was a logistical challenge to figure out how to transport the bike bag along with our other bags. Bobby tried putting his backpack inside the bike bag and carrying it like that, but it didn't work. So we ended up leaving it in a pay locker at the Greyhound station for a few hours while we took everything else home.
Posted by urbanadonia at 8:04 PM