LA the Port of Los Angeles 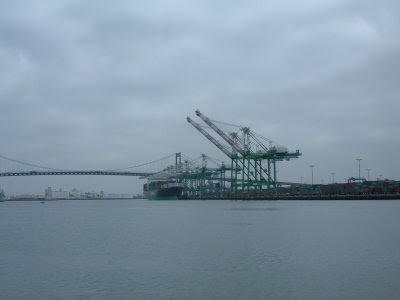 That's what they're a-callin' it these days. How does that make sense as a name? Is there an implied colon? Like "LA: the Port of Los Angeles"? But the way our tour guide said it was more like "LA the Port." I only caught the trailing "of Los Angeles" from the promotional materials they sent home with us, which are now strewn about on the floor in a code only the cats can decipher.
So we went on a tour of the Port of Los Angeles (their silly marketing names be damned!) put on by the Green LA Coalition yesterday. This included a boat tour of the massive superstructures that dominate the southern LA coastline, numerous moments of greenwashing, and a lot of opportunities for epic pictures. 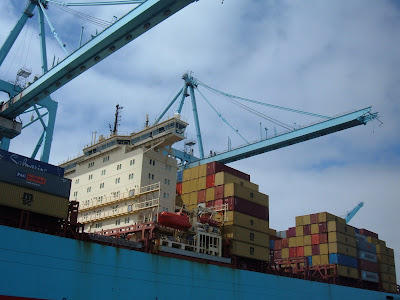 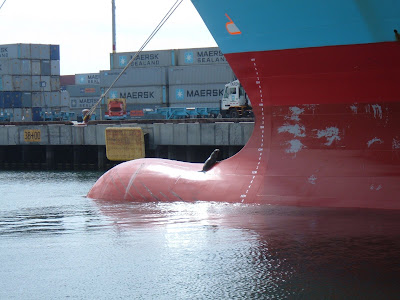 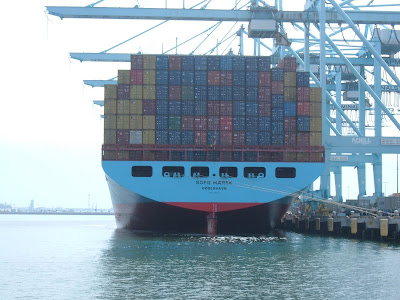 Colorful ships carrying tons and tons of products for Americans to buy at superstores. But the environmental effects of so much freight moving in and out of the busiest port in the country get offloaded onto local residents of the cities of Wilmington, Long Beach, and Carson. We listened to presenters from Coalition for a Safe Environment (CFASE) talk about their efforts to improve air quality in this area, working with the port to ensure higher emissions standards for trucks. The small costs of improved trucking technology would impact the price of that made-in-China trinket at Wal-Mart by mere pennies, but LA is famously dull when it comes to rational transportation and environmental infrastructure and planning. For example, someone from another organization spoke about the proposed expansion of the 710 freeway to 14 lanes, which would dump more and more diesel particulate matter on homes, schools, and gardens, filling the throats and lungs of children with debris.
Ugh. LA makes it hard to believe that there is progressive work being done in other U.S. cities. When I go to Portland or pretty much anywhere out of Southern California it's like emerging from a gray nightmare. And hanging out with activists and advocates gives one a feeling of hope because they're all working damn hard on these issues, but also leads to rising swells of indignation because one can no longer ignore the connections between such an everyday American action as buying some throwaway crap and asthmatic children in the poorest neighborhoods of Long Beach.
Posted by urbanadonia at 10:23 PM