After ten days of vacation in Portland, we had to say goodbye to that fair city. We departed Bobby's family home in Westmoreland on our bikes, loaded with panniers and backpacks, and headed for Union Station in downtown Portland. From that part of SE Portland you can take the Eastbank Esplanade all the way across the river on the Steel Bridge, ending up right by a pedestrian bridge that takes you over to the station.
Amtrak provides bike boxes for $15, with a bike transport fee of $5, for a total of $20 to lug a bike between Portland and LA. This is a better deal than Greyhound's $35 for sure, especially cause you don't have to somehow drag a bike box to the station and then break your bike down. Amtrak's bike boxes are large enough that all you need to do is lower the handlebars to one side and then wheel the bike on in.
And we got lucky cause these nice people from Seattle were just arriving at the station with bike boxes and they offered us theirs in lieu of us purchasing new ones. So it only cost $10 to get two bikes 1,000 miles down the west coast. Huzzah!
Then it was ride, ride, ride for thirty hours down to Los Angeles. And what a nice trip! We spent a good deal of our waking hours in the observation car (the one with all the windows- here's an example of one from the Empire Builder that goes between Chicago and Portland: 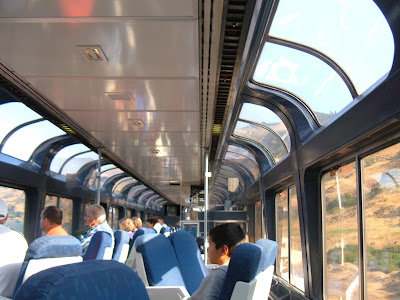 At the Eugene station, we got out to get a breath of fresh air since it was an official "fresh air smoking stop" (incongruous, no?) and saw all these prisoners looking at us passengers from their cell windows. 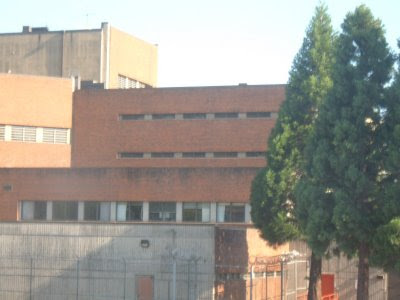 This was a tad creepy.
Most of the trip was delightful, filled with overheard conversations about seafaring, alcoholism, and this one lady who kept falling asleep while eating her salad.
Finally we made it back to LA at 8:30 pm on the 4th of July. From the back end of Union Station where we were unbundling our bikes from their boxes we could hear fireworks and firecrackers exploding in all directions, occasionally glimpsing the explosions themselves.
Then we got on the Red Line for the last transit portion of our journey, cuddling our bikes up in one of the new bike areas Metro has created in the subway cars. 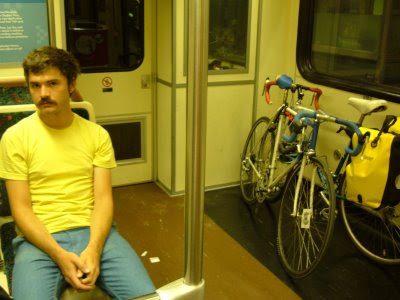 They ripped out a seat in each car, but without signage or securement for bikes. I only know about this development because of LACBC's role in pushing it forward. Put up some signs, Metro! And some velcro straps, too.
When we got to our stop and made our way down Vermont to the ecovillage, we heard booms and screeches all around. Invisible pyrotechnics enthusiasts set off blasts behind buildings, in parking lots, and in streets. And then at home we climbed atop the roof to see the lights going off in all directions. This has been the most warlike 4th of July I've ever experienced, maybe that's more true to the spirit of fireworks, eh?
Posted by urbanadonia at 11:36 AM