I'm a bit behind in documenting our bike trip, so I'm time traveling back through the journey.
Tuesday, August 11: That morning we left our happy hosts' home in Riverwest, Milwaukee at 5 am to catch a 6 am ferry across Lake Michigan. By 9:30 am EST, we were brushing our teeth in a ferry terminal in Muskegon, Michigan. Shortly our bike trip across Michigan began.
Muskegon looks like something bad hit it, or has been hitting it for many years. It's got a lot of old houses, and its city hall is a brutalist bunker, but there are a lot of empty lots and it took us about half an hour of riding around to find an open restaurant. Then we discovered that the city has a designated bike path along a major street, Laketon Avenue. 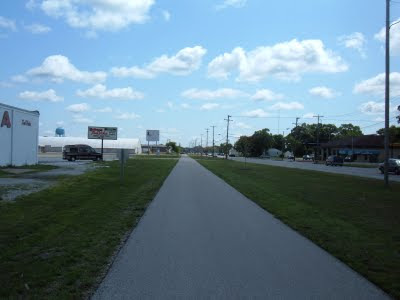 This took us nearly all the way across the city to the Musketawa Trail, a rails-to-trails conversion that spans almost the distance between Muskegon and Grand Rapids, our next destination. 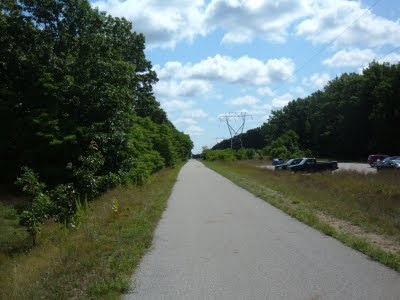 26 miles of this, much of it shaded by overhanging canopy on both sides.

We stopped for lunch at Ravenna, one of the villages the trail passes through. Hungry beasts that we were, we ran through a grocery store grabbing wildly for sustenance. We ended up feasting on roast chicken, Chex mix, apples, chocolate pudding, and this Midwestern delight, banana Nilla wafer pudding: 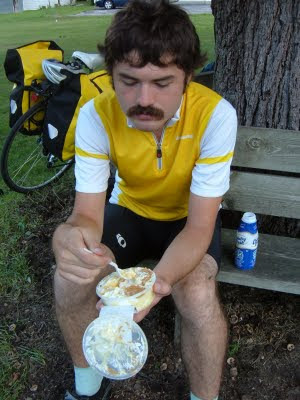 Then the bees found us and demanded our chicken, so we had to run away.

Finally after hours of cycling, and the harsh realization that my bike shorts, while awesome, really do need a pad for additional comfort, we made it to the end of the trail. See? 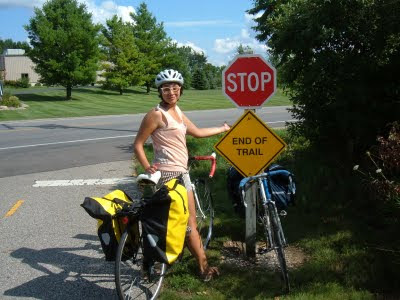 After the end of the Musketawa Trail, we had to wind our way through suburbs on the outskirts of Grand Rapids. This meant riding along a highway and being harrassed by teen boy drivers for a few hours till we finally reached the city itself. Instead of staying over with the Couchsurfing contact we'd found, we decided to treat ourselves to all the luxury a Days Inn can afford.
Total miles traveled: 39-45, not really sure.
Posted by urbanadonia at 3:59 PM