Again, I'm taking a break from chronological linearity on the blog right now. This time I'm traveling back to August 9-10, when we were convinced to stay in Milwaukee instead of immediately jumping on an early morning ferry across Lake Michigan.
From our Couchsurfing hosts' apartment in Riverwest, we rode along a beautiful trail to downtown Milwaukee, stopping at local fixture Alterra. The bike racks testify to the popularity of this coffee shop. 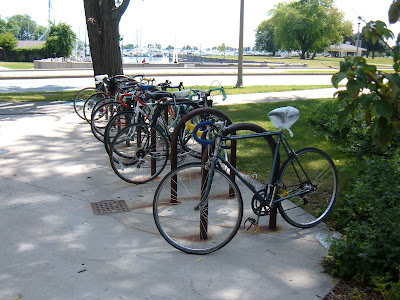 And here's the facade of the place, this one housed in a sewage pumping facility that is actually still functioning. 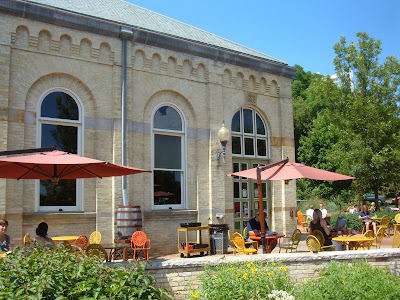 Later we rode along a lakeshore trail and jumped in the freezing waters of Lake Michigan. After that we went to see the famous Santiago Calatrava-designed art museum. Here's a detail shot Bobby took: 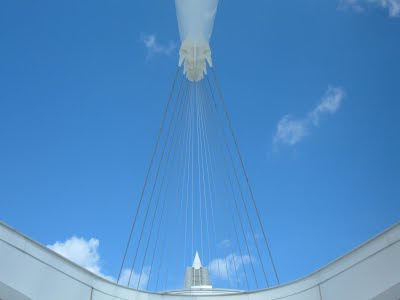 And here's the harp-like complex viewed from beneath the older museum building/ war memorial next door that was designed by Eero Saarinen. 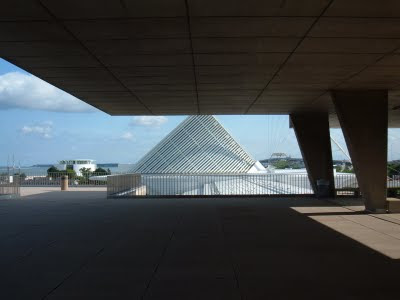 A little bit down the lakeshore from these museums sits a really neat public art installation called Wind Leaves. It's these tall funny half circles covered in giant sequins that shake in the wind, causing pleasant sounds and flashing sparkles. 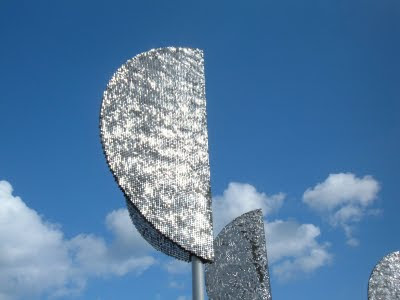 In short, Milwaukee has many delights to offer. Maybe one day I'll consider a post-doc at the University of Wisconsin. Of course, the city's highly segregated, with the usual gentrification cycles going on, and a lot of areas that are considered uninhabitable by local whites. But what city is immune to these problems? At least more and more people are facing this shit instead of running and hiding from it in the suburbs.
Posted by urbanadonia at 7:59 PM