After a night at Portland's only motel, the Best Western American Heritage Inn, a stone's throw from the interstate, we hopped back on Grand River Avenue and scooted our bikes toward the state capital, Lansing. Here we hoped to find a nice afternoon break and some riverside trails to give us a break from highway riding. Based on the state seal, I expected plenty of tuebor and circumspice, dancing stags and moose, the works. The capitol building proved animal-free, but full of nice details that are original to its 1878 construction or were added in the intensive restoration they recently completed: 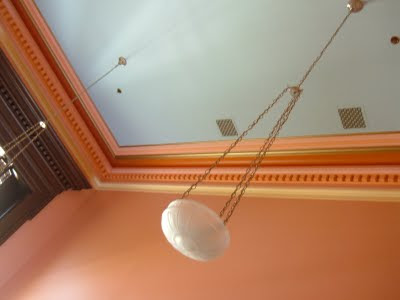 This is a ladies' restroom outside a senate hall. What trim! 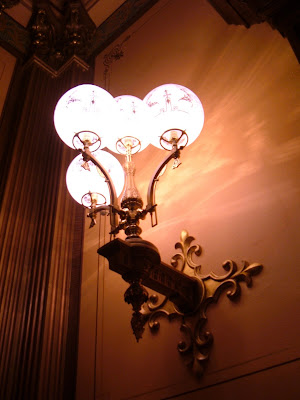 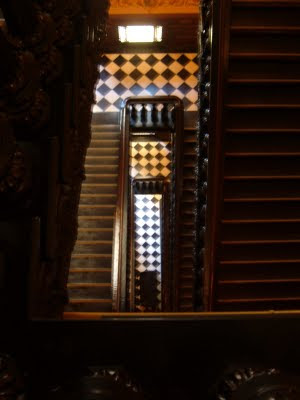 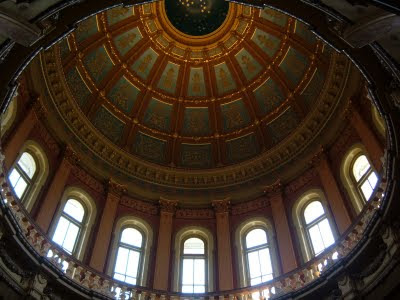 The architect who designed this building, Elijah Myers, had a significant influence on capitol architecture in the U.S., and coincidentally the other capitols he designed are ones I've visited (Austin and Denver).

The rest of Lansing appeared lackluster to this bicycle tourist, though we did nicely manage to pass through the city using river trails and bike paths through Michigan State University. Alas, eventually the campus ran out and we found ourselves flung once more onto a busy highway. Grand River Avenue goes through many many big-box-exurban nightmare zones. We kept expecting traffic to die down, since we were getting out of a city and back into the country, but the buffaloed small towns full of huge chains kept coming for some time.

After a while traffic did get lighter, and we could ride more comfortably. Then I spotted an ice cream stand and ate the biggest banana split I've ever seen. And managed to ride another 15 or so miles afterwards!

The day gave out just past Howell, where all the white folks were out to celebrate a melon festival. Usually I'd be all over a melon festival like flies on...melon, but there were no motels to be found near that little burg. So we rode to an interstitial zone between towns where there was a cheap ass motel with horribly smoke-riddled rooms. Let me tell you, it is a shock to grow up in California and then visit other parts of the country where people smoke a lot; and it's not just the hipsters, it's like grandmas and shit! And the restaurants have "non-smoking" sections, but that's a crock. And if you sit outside, the mosquitoes drink drink drink!

Our cheap motel was pretty grim. It's called the Grand View Inn, and here's a picture of the 60s themed room (that's right, theme rooms in rural Michigan). Our room wasn't themed, though, unless the theme was jail or something.

On TripAdvisor you can read the planted review of the place, which I'll just copy here cause I'm a jerk:
This is very good motel, clean and staff is very helpful. All shopping and resturants are very close by. We stayed at the Jungle Jacuzzi suitres one day and Wester Jacuzzi on second day. WE LOVE IT!!!!
We were provided a free bottel of wine for our anniversary too.
I recommned this motel to all. This is an ideal place for brideal shower, wedding day stay, anniversary too. You can treat your love one by staying in this romantic suites.

Online hotel reviews are hilaaarious, we've discovered. Either they're written by the sort of people who carry Febreze in their purses and expect something other than threadbare pillows for $89/night, or by the migrant families that run the establishments.

Fortunately we got to watch more "Married with Children," which has apparently taken over TVLand's entire programming schedule. It plays for at least two hours every weeknight.
Posted by urbanadonia at 3:00 PM