On Friday morning Bobby and I braved the midtown traffic and rode our bikes to the Center for Land Use Interpretation in Culver City. Bobby had been lucky enough to buy tickets for a tour the CLUI folks had planned before all the tickets sold out, seven minutes after they went on sale. The tour expanded upon the current exhibit there, which details oil extraction in the Los Angeles area. 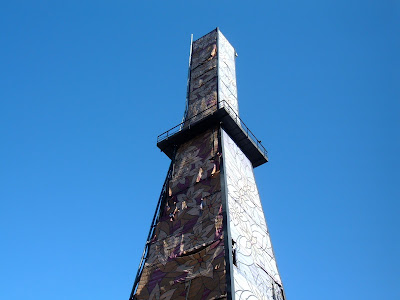 We all piled onto a tour bus and headed to Beverly Hills, the first stop on the tour. At Beverly Hills High School stands a large, oddly camouflaged tower. It is an oil derrick that produces enough oil to make money for the school district, the oil company, and the property owners in the area.

A property's mineral rights can be separated from the land up top, so one person might own a house while another owns the rights to the mineral wealth underneath. 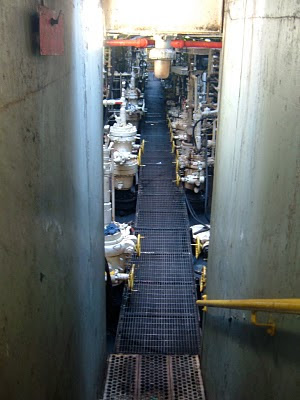 Extracting oil in urban areas requires tremendous PR work on the part of the oil companies, not to mention complicated machinery to ensure that wells do not leech into the surrounding soil. Much of the oil that is extracted must be separated from water, so from well sites flow two liquids: oil to the refinery, and water to the sewer (although often the water gets reinjected into the ground to encourage oil to come to the surface, or to simply prevent the ground from sinking, known as subsidence).

It occurs to me as strange that the oil companies have not yet decided to greenwash their product as a local one. Presumably some of the gasoline sold in gas stations around Southern California came from crude that was delivered to the refineries west of the 405; why not slap a big "local" sign on those gas pumps so that Prius owners can delude themselves even further?


Our bus took us all over the basin, from Beverly Hills along Pico, where there are many wells, to downtown, which no longer has functioning wells. Near MacArthur Park sits the last operating well in the City of Los Angeles, tucked inauspiciously between two commercial buildings and across the street from apartment buildings. It is managed by a guy who leases oil wells all over the region, sucking out little bits of oil, in decreasing quantity, for profit. 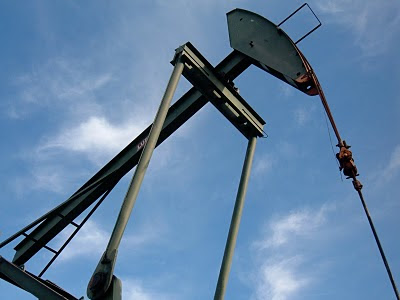 Matt Coolidge, CLUI founder and tour leader, wanted to show us that there is a human face to the oil industry. He did this by having people meet us at most sites, friendly people who work and live in the LA area. In Signal Hill we even ate lunch at an oil-themed diner, Curley's, which has served oil workers since the 1930s.

Like much of Signal Hill, Curley's shares its lot with pumpjacks that tirelessly move up and down, pulling crude out of the ground.

After lunch, a corpulent gentleman representing Signal Hill real estate and oil interests joined our tour. At that point things got a little weird for me, as we were in a cookie cutter suburb crammed with faux Italian or Spanish stucco strip malls, pumpjacks in the gaps, and this large, red-faced man told us how great Signal Hill is, and how soon a Ross will replace the failed Circuit City in one of the larger commercial developments they've added in recent years.

Things got worse as our bus climbed Signal Hill itself, passing hideous condos with views of Long Beach and ending at a park with a monument to the geyser of water that drained this area's groundwater in the early twentieth century. 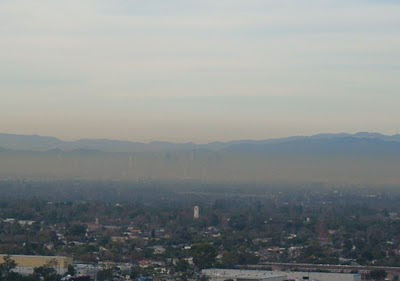 A Hawaiian shirted old surfer met us there to tell us about the geological details of oil fields. He ended his cheerful, frenetic talk with glowing praise for people like the corpulent gentleman, who believe there might be billions more barrels of oil under the LA Basin, and that they just need to go out and find it.

Through the haze in this picture sits downtown LA. I felt more and more unsettled as I listened to a friendly human face speak without irony about the great profits property owners and prospectors would gather if oil were to be found under LA, with no reference to the yellow smog visible in all directions from our hill location. No connections were made between the extraction of oil and its associated wealth and the eventual particulate matter that gets spewed out of exhaust pipes every time a vehicle carries a human around our city. What does the smog have to do with getting rich, the American Dream?

Finally, a sunset, for, as Don Delillo pointed out so eloquently in White Noise, some good does come of airborne toxic events. 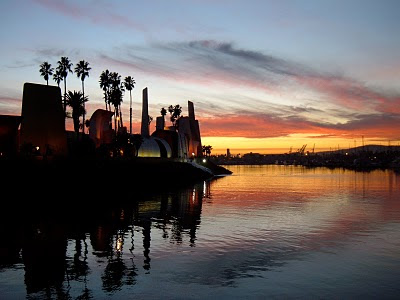 This sunset glows beyond the Grissom oil extraction island in Long Beach harbor, decorated with modern forms to soothe the untrained eye, which might not see beauty in the straining metal of a pumpjack.
Posted by urbanadonia at 8:46 PM