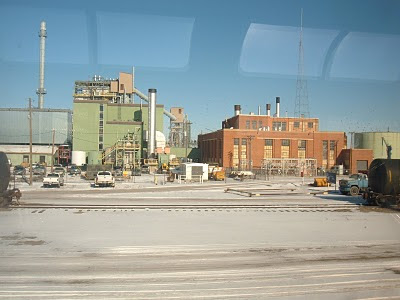 Starting from Newark, New Jersey, I rode the train all the way across the country to Los Angeles in December.

First in my itinerary came the Pennsylvanian, which took me from Newark's Penn Station to Pittsburgh's ass of a station. The ugly box there with a faulty vending machine (no pretzels for me) held me and many other passengers, some Amish, for about six hours in the middle of the night while our next train, the Capitol Limited, made its way to pick us up.

Wikipedia told me that the Pittsburgh train station has been converted into condos. Passengers must wait in the Greyhound-style room because the grand old station lobby is now the condo lobby. What a deplorable bargain.

When the train finally arrived, we whisked through the night to Chicago, passing the Erie lakefront I'd bicycled along in the summertime. I managed to fall asleep right as we entered Cleveland, which was too bad because I wanted to see its myriad bridges lit up against the night.

Chicago lay covered in piles of snow, which delighted my Californian inexperience with such things. Usually when I have layovers in Chicago I love to wander around the Loop and feel like a brash pedestrian, crossing streets amidst a sea of businesspeople. But this time I holed up in a boring café and read the news for a few hours while the door blasted us patrons with icy wind every time someone entered or exited. 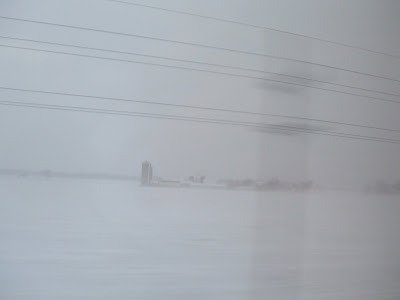 The Southwest Chief departed Union Station on time and whipped me through a wintry Illinois landscape.

I usually do a good job of ignoring the people around me on the train to the extent that I need to, but there were some doozies on this trip. One woman with a deep, gravelly smoker's growl went on and on with a set of dudes about wanting a cigarette. One of the dudes contributed a smoker's bubbling cough every so often, while the other one, a tall, black trench-coated artist of some kind, made loud
misanthropic remarks. 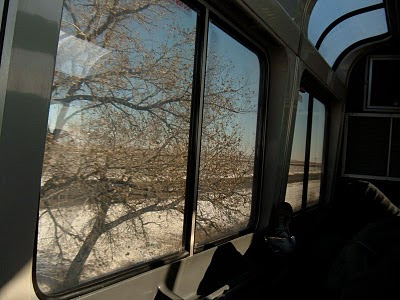 One thing the train people talked about was the lack of available power outlets. Some coach cars have outlets at every seat, while others have only a few per car. This means that an informal society must develop around a scarce resource, and the growling lady took the lead. Later she watched a disaster movie without headphones, so screams and booms reverberated throughout the car till late at night when I asked her to turn it off. I don't think she forgave me for that one, even though later in the observation car she asked my name and whether I was "involved in politics," cause I looked familiar.

We lost a lot of hours somewhere in Kansas, and by the time we got to Albuquerque we were way behind schedule. 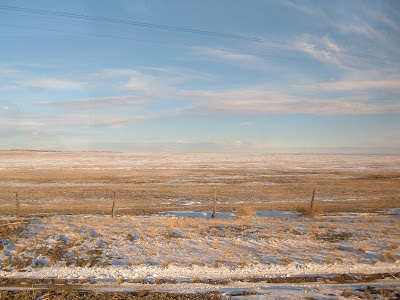 Flagstaff filled the train to capacity as dozens of students from Northern Arizona University climbed aboard, presumably headed home for the holidays. Another body took the seat next to mine, making sleep a tad more difficult (not by much though; having two seats doesn't really improve things in my opinion). The trenchcoated artist found this new influx of people intolerable, though, and complained loudly into the night about how terrible it was to have someone sitting next to him. He repeatedly forswore Amtrak.


I've found that it is better to retain one's equilibrium aboard the train than to suffer angrily through the delays. I think it's ridiculous that passenger rail in the United States has been so limited by private ownership of rails, where Amtrak must fit into scheduled "windows" or lose place in line entirely, leading to indeterminate wait times in the middle of nowhere. I'd love to time travel to the 1930s and have my pick of any number of luxury liners with fanciful names evoking the blissful speed of the mighty locomotive.

The modern incarnation of passenger rail did get me home eventually, just four hours after the scheduled arrival in Los Angeles. Total time across the country: 72 hours including both rail time and station time.
Posted by urbanadonia at 6:14 PM