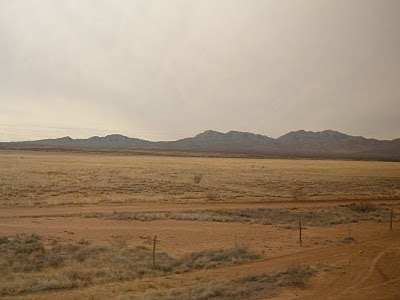 Traveling to Austin, Texas for a New Year's wedding, I booked a sleeping compartment on the Sunset Limited and Texas Eagle cause I'm fancy like that.

I love sleeping compartments, which are tiny little closets into which you cram yourself and your stuff. The big windows let you see a panorama of the vast landscapes through which you hurtle, and you get to lie all the way down to sleep with pillows and blankets.

Plus, all of your meals in the dining car are included in your ticket. They do community seating to maximize space in the dining car, so you get to chat with nice people while gumming up your soggy vegetables. 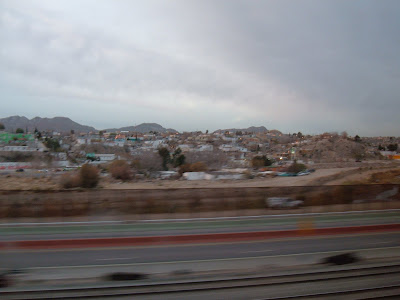 The Sunset Limited travels across the southernmost deserts of California, Arizona, New Mexico, and Texas. Much of the route takes you close to the Mexican border, and arriving in El Paso you get close enough to see the shacks of Ciudad Juárez on the other side of the fence.

The Sunset Limited continues on to New Orleans, while the Texas Eagle heads north to Oklahoma City at San Antonio.

What's funny, though, is that the Texas Eagle sits in San Antonio for ten hours before heading north. San Antonio is just 80 miles below Austin, which takes about an hour and a half by train. So, while I could have left the train in San Antonio and found some kind of ride up north to Austin, I had to sleep on the train while Amtrak personnel mysteriously moved the sleeping car from one track to another. You'd think that you could at least sleep well if the train is not moving; ha! Back and forth, lurching slowly, ramming into connecting cars, all night long.

When I did get to Austin the next morning, I thanked heavens for my lovely rainboots and raincoat since I had a few hours to kill in the rainy city before my friends and I checked into our rented house.

Then we proceeded to have a rip roaring good time celebrating lovely friendships and marriage, and I flew home on Southwest. In this case my return flight cost considerably less than my train ride because sleeping compartments make more economic sense for two travelers rather than one. Amtrak charges a coach base fare for each passenger, then just one additional fee for the sleeping accommodations and meals. It's effectively two for the price of one.
Posted by urbanadonia at 8:42 PM