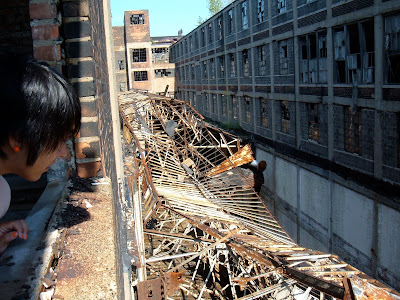 Back in August Adonia and I spent a week in Detroit Michigan, which turned out to be a very interesting interlude in our midwest bicycle tour. We thought we would just spend a few days there but we got sucked in to the history of the place, met some very nice people, and found it difficult to tear ourselves away.

As we biked across Michigan toward Detroit (the historical posts are here, here, and here), everyday friendly corn-growin' midwestern types would ask us where we were headed. When we responded with "Detroit", a cloud would usually cross their face and they would ask us why, or warn us to not get there after dark.

As usual with our approach to cities in the Midwest, we were rambling along country roads until we found ourselves in the soul-killing (and bike unfriendly) exurb zone, which faded into fancy suburbs (largest middle east population outside the middle east), which abruptly gave way to the city itself. We could tell we had arrived in Detroit when we suddenly started seeing collapsed buildings and poor black people. I could tell how this would look threatening and dangerous to those people who warned us. 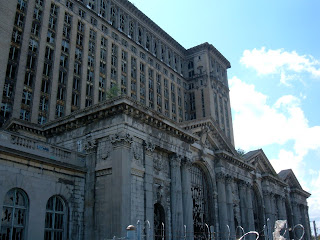 Right as you enter the city proper on Michigan Ave. the looming specter of the Michigan Central Station appears. This is a very tall building, probably the most famous abandoned building in Detroit (it was the pictures of this building that was one of the reasons I initially became interested in Detroit). Designed by the same architects who designed Grand Central in New York, it is a Beaux-Arts building from 1913 that looks absolutely beautiful/creepy with all of the broken windows and graffiti. Our friend told us that one of the reasons it is still standing is that it was built to have train traffic going through the 2nd floor of the building, so it was reinforced with massive amounts of concrete to stand up to the vibration and weight of train traffic. For this reason it would be very expensive to demolish, so it continues to stand, right next to downtown Detroit. It is the first large building you notice on the approach to downtown.

We met up with our couchsurfing hosts in their nice Victorian house in the Woodbridge neighborhood right outside of downtown. About half the lots are empty in their neighborhood (burned down, demolished, or simply collapsed into their own basements), so most people have a garden and plenty of open space. The preponderance of empty lots also made biking in town a joy, because the sight lines are so good that you can just cruise through intersections - not that there are that many cars around anyway, as the population of Detroit is so small. 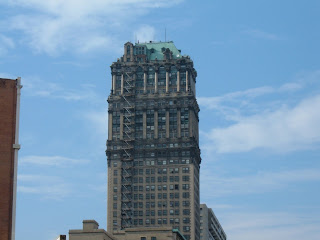 I contacted Geoffrey George and he offered to show us around, so we spent a few evenings and days with him. He is part of a loose-knit group of photographers, urban explorers and flaneurs who know which abandoned buildings are currently accessible and which are locked down with security or are too dangerous. (I would not reccommend abandoned buildings in Detroit without the guidance of some local experts like George. In addition to being technically illegal, trespassing in these buildings is hazardous because of the fragile floors, gang activity, etc). The first building we went in was a mid-sized building downtown. Geoff, several other adventurous Detroiters and Adonia and I climbed at night through the stairwell and had a fantastic view of downtown from the roof, as well as a pretty decent-sized tree that had grown up there. From the roof we had views of the many other abandoned buildings downtown, including the spectacular Book Tower (see picture), which could have the dubious distinction of being the tallest abandoned building in the world. The group of Detroiters traded notes on which buildings they had been in, resulting in some amusing one-upsmanship ("you've been in X! Even I haven't been in X!"). 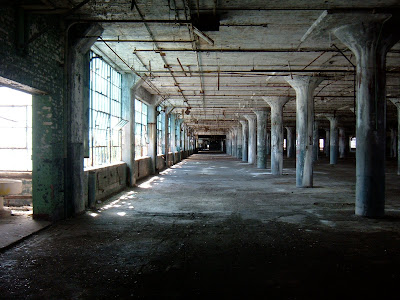 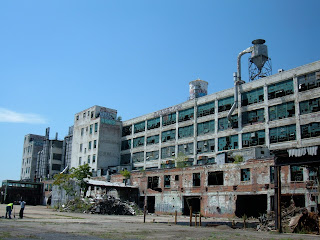 On another day Geoff took us on a bicycle tour of abandoned buildings with some other urban enthusiasts. First we visited the Fischer Plant, which is a favorite of photographers for its green glass and early industrial architecture. We made a hasty exit when some utility workers showed up to fiddle with something (Geoff profusely apoligizing and explaining that he had "never seen anyone here before"). 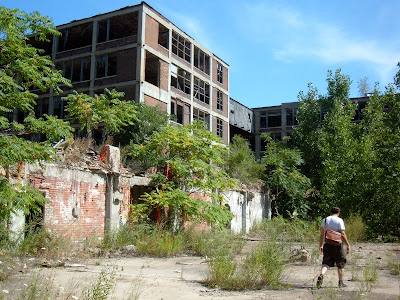 Next up was the Packard Plant, which is the sine qua non of abandoned buildings in Detroit. It isn't just a building, but a mile long complex of buildings that is the former site of Packard automible design and manufacturing. It is pretty mindblowing to think that Packard shut down in the 50s and the building has just been sitting there, slowly falling apart for the last 60 years. This was the easiest place to access, as no one has even tried to close this off for a long time. Seeing as it is so large it would be a massive undertaking to close it off. We went through some tunnels that Geoff had discovered under the building and then set off for a hike. I say hike because the complex is so large, with 4 or 5 stories, that going for a walk in the complex seemed more like a hike. The wood floors had disintegrated to a forest-like duff, and a breeze blew through the empty floor to ceiling windows, adding to the resemblance of a hike in the woods. 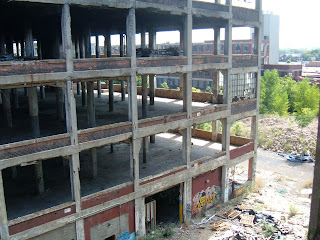 There is the beginning of an actual forest on the roof, where trees have grown up right through the asphalt. 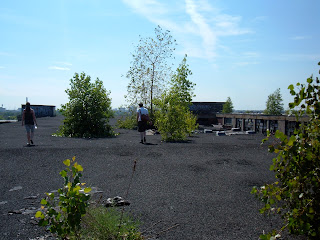 I noticed this on many abandoned buildings and thought it odd that trees would grow right out of this stuff, without that many other plants around. I guess enough organic material blows onto the roof and into the gravel to sustain these guys.

Since the complex has been abandoned for so long, scrappers ripped out the wiring to sell for scrap long ago. Part of the complex had been used as a paintball arena for some time (there is a whole room full of paintball refuse). There are many enigmatic phenomena here, such as the numerous boats on upper floors of the building, odd art projects using found objects, and this strange sight. (tire pile). Geoff speculated that parts of the building have collapsed because of scrappers actually breaking apart concrete columns to pull out the metal rebar inside. 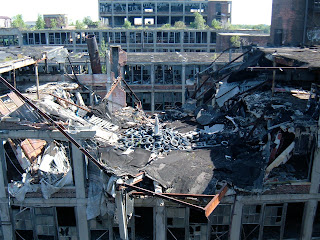 It looked to me here like people had started playing ring toss with all those tires, trying to through them over that column - but aren't tires too heavy to throw 30 feet? Just one of many mysteries here. 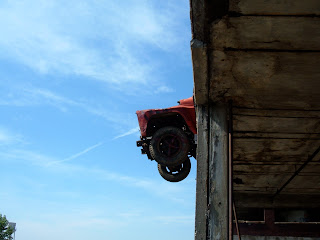 Another less mysterious thing is this truck that some jokers recently pushed most of the way out a window (Geoff knew about this because the guys bragged online about it).

We also explored the business department of the complex, where people used to design the cars and so forth. These were all ripped up of course, but even so we came across some old blueprints for car parts that 60 years of scrappers and souvenir-hunters had missed. 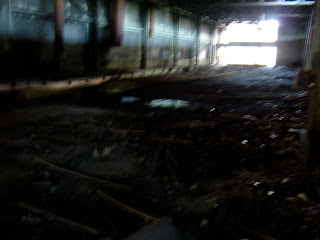 You definitely have to watch your step, I peeked into this darkened interior room and noticed that the floor had started to disentegrate - it had a big hole that looked like the hole in thin ice on a lake.

Walking around this complex I couldn't help but think of Henry Ford IIs quote above - this abandoned building is a direct result of "progress". Automotive technology changed so quickly that it created and then destroyed Detroit in just 50 years. All over Detroit are plaques that detail where Henry Ford built this first car, or sold the first car, or whatever, that glorify him as the creator of the city. The technology and social stratification he gave rise too also destroyed it.

We explored a lot more of Detroit as well - more buildings, Belle Isle, the RenCen - perhaps to be detailed in further posts. We left by crossing the Rouge River into Canada (who knew Detroit is right next to Canada? I didn't!)
Posted by Bobby at 8:05 PM