When Adonia and I decided to check out the Heritage Square museum, we were dismayed to discover that there is not a direct way to walk there from the Heritage Square Gold Line stop. You actually have to walk pretty far north next to the noisy highway, and then double back. I noticed from the satellite view there is an intriguing dirt road that goes directly there on the east side of the arroyo. We thought we would check it out. Here is a map of the route we took, with all of the fence-hopping points marked:

First, we walked down Pasadena Ave and crossed the 110 and the arroyo. We found the entrance to the dirt road blocked by this easily hopped fence: 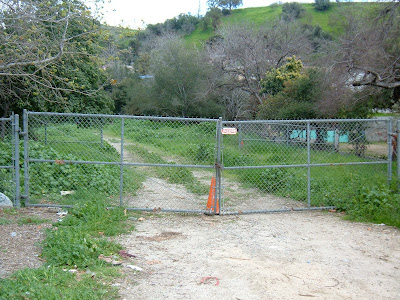 I could see a dumpster down the road, so I figured it was one of the many county access fire roads that tend to follow the arroyo. We hopped the fence and walked down the road. 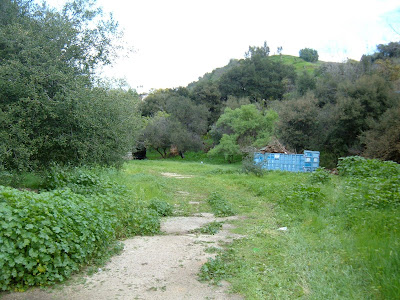 Since it has been raining so much lately this area is very lush and green, with pretty big trees and bushes on both sides. The arroyo drops off to the left and there are the backyards of houses up on the hill to the right. It is a very nice walk through the greenery. 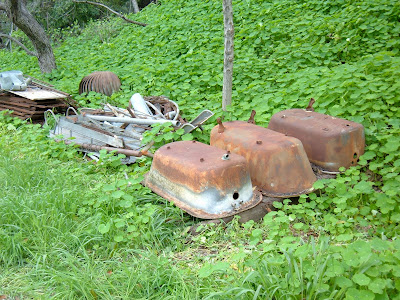 As we walked along we started to notice debris from old houses, such as these rusty bathtubs. 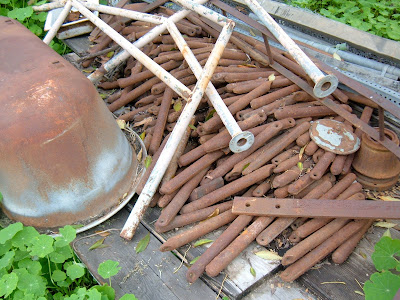 I recognized these weights as the signature debris of old-house retrofitting; our building in koreatown also has a pile of these out back. There are the weights to balance windows that go over pulleys, I suppose an antiquated technology that is made obsolete by modern energy-efficient windows. Our windows still have them and you can hear the weights rattling around inside the window frame when you open or close the window. 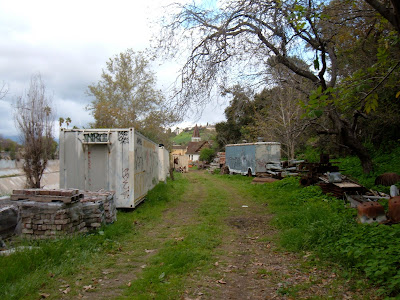 At this point it became clear that the museum must control this right of way since it was full of their stuff - why couldn't you walk to the museum this way? Adonia and I got our pedestrian indignation on as we ranted about how they had named the metro station after the museum, yet failed to provide an easy way to walk there from the station. All they have to do is open the gates and there is this great path!

Eventually we reached a fence that had barbed wire and was therefore too challenging for us to climb. Directly to the left of this fence, however, we noticed that the fence on the arroyo was bent over where other people had crossed it. We took this as an invitation and hopped that fence into the arroyo: 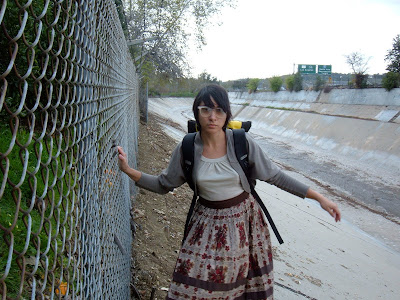 In this part of the channel the sides aren't too steep so it was pretty easy to walk on. We walked past the museum until we reached an actual hole someone had cut in the fence. This fence hole, and footprints in the arroyo led me to believe that others had trod this path before us: 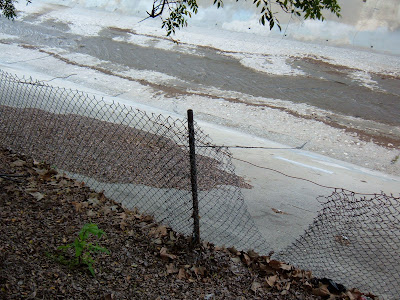 Now we were at the museum entrance, and I asked the proprietors why the gates aren't open to allow easier access from the Gold line. They said that it simply is a matter of lack of volunteers and money - they would need people to staff the other entrance as well, and money to upgrade the path and entrance on that side. After seeing the advanced decay of some of their structures, I saw how this access might not be the most of their worries right now. I suppose what really needs to happen is for the city or county to put in a path here, and the museum could just fork over 8-10 feet of their right of way. Then the fence along the arroyo could just be moved in a bit and there would be a nice pedestrian and bike access along this stretch of the arroyo. This would be similar to the first stretch of the arroyo seco bike path, just a mile or so up the road.

When we were leaving they were nice enough to offer to let us out the back way, and some very friendly volunteers opened the barbed wire gate and walked us back to the Pasadena Ave entrance. No fence hopping required! So if you aren't comfortable hopping fences, you can at least leave this way.
Posted by Bobby at 9:04 PM