Luckily For Me There's Heritage Square 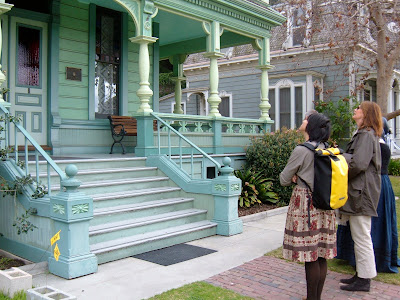 On the edge of Montecito Heights in Northeast LA sits Heritage Square, an odd hodgepodge of stately old homes that have been spirited here from various sites in the region.

A lovely tour guide in Victorian garb led us through some of the houses. She said that the park started in 1969 with two relocated mansions from Bunker Hill, but those burned down. (Later we saw some fragments of fireplace tile, their grisly remains.) 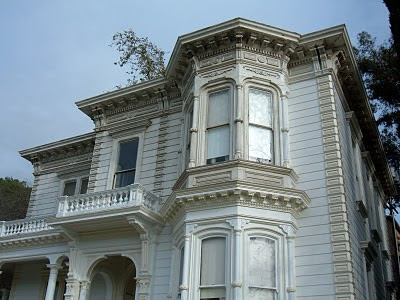 First, the Mt. Pleasant House, a rich family home built in 1876. I like the corner details that look like giant pieces of Pez made of chalk. Our tour guide pointed out ornate hinges and door knob rosettes. We didn't get to see much of the interior of this guy because a group was setting up for an event. This is an important source of income for the park. 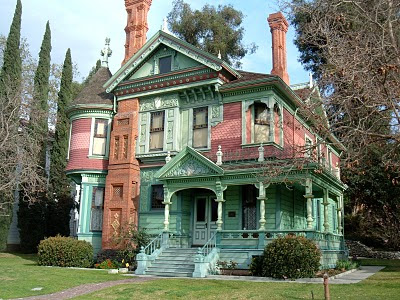 Next door sits the Hale House, a Queen Anne number from 1887. Oh the ornate woodwork, the lincrusta paneling! Each chandelier had been outfitted with both gas jets and electrical sockets, and both energies flowed down the same channel, yikes.

At some point in time (maybe the 1970s?) the house got painted a bunch of different colors as an advertisement for a paint company, and stayed that way until some official insisted that Heritage Square repaint it. Supposedly it caused a number of accidents on the 110 Freeway, just across the channelized Arroyo Seco waterway from the park. 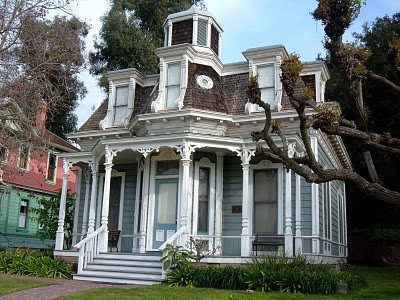 Miss Victorian Tour Guide classified this house as working class, while the Mt. Pleasant House typified a custom home of wealth, and the Hale House was a middle-class tract home. It had originally sat near Lincoln Park and the Selig Zoo. It may have had a lion or two pass through. 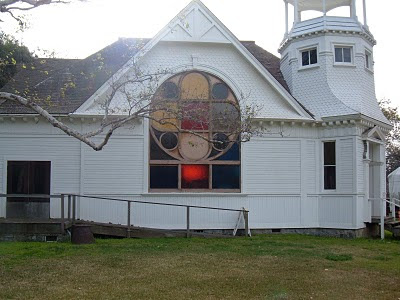 This Methodist church on one end of the lot seems to have an evil glow emanating from its core. The interior's cavernous waste cannot be accessed by visitors. 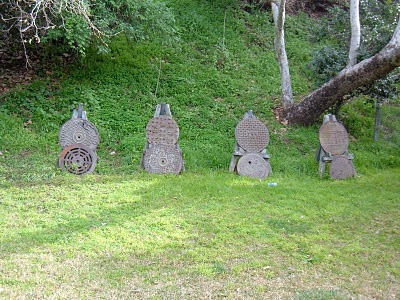 Though they look like archery targets, these are actually part of the Heritage Square Manhole Collection. Really these drive home the point that for many years in LA our history has been something to sweep aside, maybe into a confined zone where the diehards can go and salivate over broken bits that got in the way of endless progress. Heritage Square was founded at a time when rampant redevelopment changed the character of Los Angeles' landscape, burying Victorian splendor beneath towers of Epimethean postmodernism. 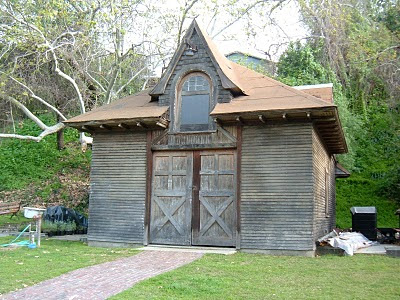 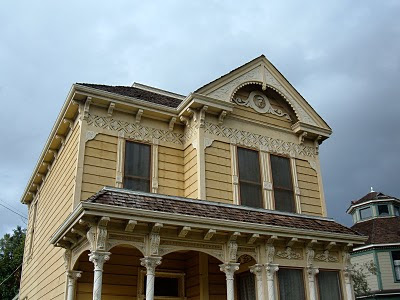 An exile from Angelino Heights, replete with the elaborate woodwork of John J. Ford. This home had been built as a tract by the Beaudry Brothers, but Mr. Ford embellished his family's home with his own handiwork.

One other gem of a house sits on the lot, but I didn't find the exterior impressive and no pictures could be taken in the interiors of the buildings. Octagon House! Bobby described it as a proto-Bucky Dome. You walk in the door, and immediately lose your sense of direction as two rooms mirror off the entryway. Plus there's a little tower on top.
Posted by urbanadonia at 6:51 PM