On Saturday Bobby and I took a tour of downtown LA's historic core with a very nice docent from the Los Angeles Conservancy. As history and walking enthusiasts, we'd already seen quite a few of the sights included on the walking tour from Pershing Square to the Bradbury Building. But boy do I love tours! 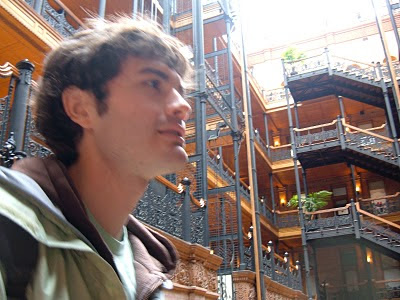 The Bradbury Building, an anomalous beauty from 1893, lets daylight flood into its interior via a glass ceiling. The wood detailing gleams.

There's a little park on the backside of the Bradbury Building that I'd never seen. It has an interpretive exhibit memorializing the first black woman to own property in Los Angeles, Biddy Mason. In fact I think it's called Biddy Mason Park.

After the tour we ventured on to lunch at the Nickel Diner down on Main Street, and ran into this dog-splosion on the way. 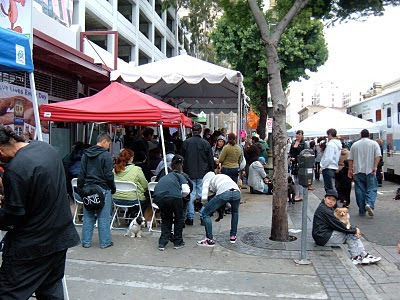 All of these people had dogs with them. I think maybe a free spay/neuter clinic was going on? I saw a lot of Latino families with little pups, which surprised me cause usually in that area I just see downtown yuppies with conspicuous consumption dogs (does a weimeraner's piss smell better than that of the homeless who've been removed from that part of the city? It's debatable).

On Sunday we rode all the way to Sierra Madre, following the Arroyo Seco from downtown LA to downtown Pasadena. OMG I saw so many roadies, there had to be tens of thousands of $ in gear and bikes riding around on Sunday. 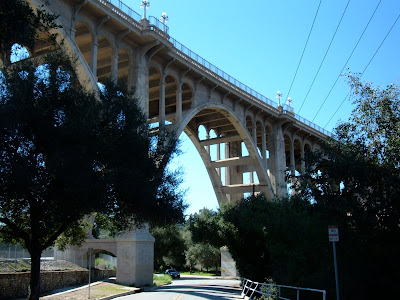 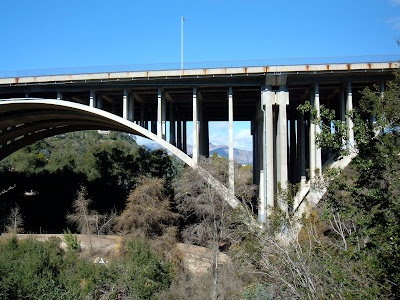 Then we made it to the Rose Bowl, which has confusing signage. 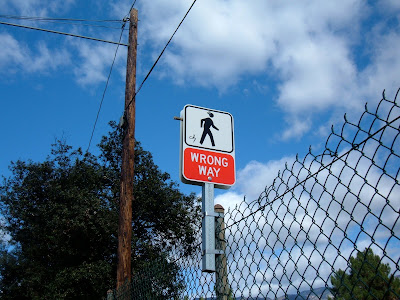 But walking's a good thing, Rose Bowl! (I know it's actually directing people to flow in one direction instead of in two, but I still think it's a mean sign. Too symbolic in our car-dominated landscape!)

The Rose Bowl does seem kind of like a ciclovía, there are lots of people walking and biking on the loop road around the parking lots. But there were still lots of cars present, maybe that's unusual, this was Super Bowl Sunday and there seemed to be some kind of run finishing up. I tell you though, it makes me sad to see a young woman drive up in an SUV, park, and get out wearing running clothes. Maybe she lives in the middle of a freeway and can't run from her home?

Then we headed east on Mountain Street to Sierra Madre. This little residential street went through the "Bungalow Heaven Historic District."

At one point the street became a really wide boulevard for a few blocks. 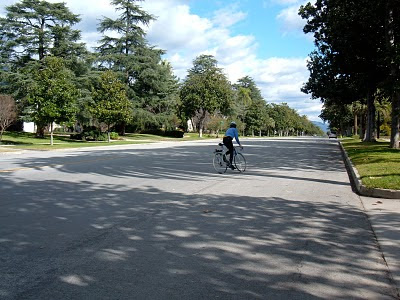 This seemed strange to me, because the homes lining this big wide street looked pretty fancy and well-maintained. 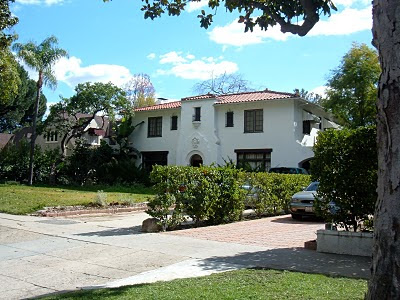 What historical vagary led to such a wide street? Nowadays a wide street is an invitation to speeeeed through a neighborhood; maybe in the past there was a streetcar line through here or a greenbelt.

After lunch in Sierra Madre, we climbed up as high as we could and saw a post-rainy day view of the LA Basin. 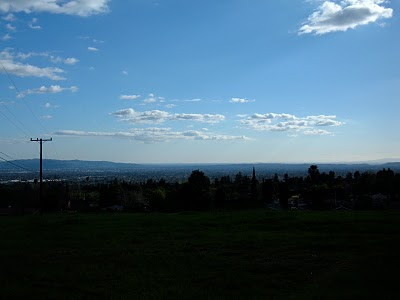 We decided to take the Gold Line home, and coasted down from the foothills to Sierra Madre Villa station on Sierra Madre Villa Avenue. This station and the few between it and downtown Pasadena make little concession to the bicyclist or pedestrian; you enter this one through a parking garage, and then you must yell to your companion to be heard over the roar of the 210 freeway shooting past on both sides of the platform. 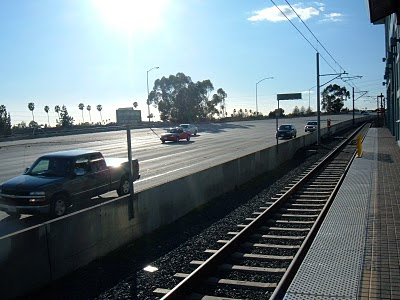 I really like riding the Gold Line, it's got a really pretty route through Pasadena, South Pasadena, Highland Park, and Lincoln Heights. Nice views all the way into downtown LA.
Posted by urbanadonia at 9:56 AM