On Monday I rode my loaned cruiser from Corktown to Dearborn, ready to spend some scrilla on admission to Greenfield Village and the Henry Ford Museum.

I used Google Maps' bike directions to figure out a route, and I had passed through Dearborn when arriving in Detroit from a bike tour across Michigan last summer, so I figured it couldn't be that impossible to bike there.

The first impressive thing I encountered was this massive pedestrian bridge project that connects Bagley Street across the Fisher Freeway. 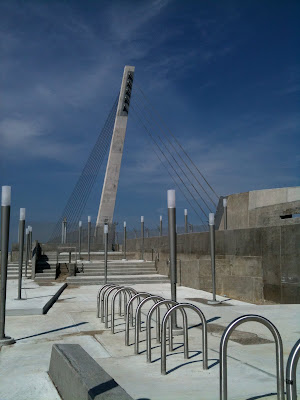 Rather striking, Calatrava-esque. It was totally empty, though. And why are there so many bike racks? Who is locking up their bike at this bridge instead of taking it across the bridge to Mexicantown? Nobody, apparently.

This thing looked brand spanking new. There was also a mural. 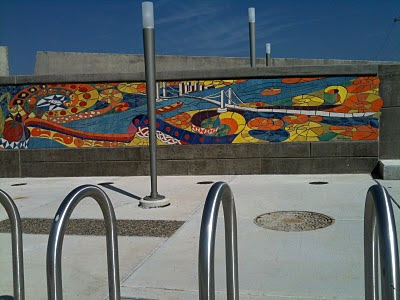 I think it's probably supposed to celebrate international friendship, but it looks more like a yummy rendering of Detroit and Windsor as colorful pizzas. Also, it's a well known problem that you can't take a bike across either the bridge or the tunnel on the international border. A bit ironic, then, to have these fancy bike racks in the foreground of the mural.

Once I crossed the ped bridge I noticed that it creates a striking contrast with the iconic Michigan Central Station looming on the horizon. 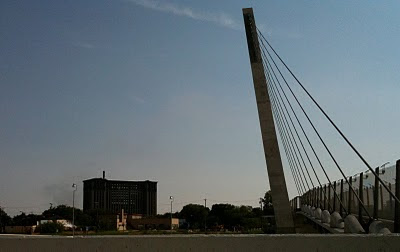 I decided to stop in at Café con Leche on Vernor Highway in Mexicantown cause I wanted to see if it reminded me of LA. It did. Seems like a pleasant meeting spot. When I was leaving, having been latte-d to perfection, a strange young gent pulled his bike up by mine and asked if I was so-and-so's friend. Turns out he is on the board of directors of the Hub/Back Alley Bikes, and I was supposed to talk to him at the chicken races the day before, but I'd run off to enjoy a bike ride through downtown before sunset. It was a perfect illustration of the best side of Detroit's networked universe, at least relative to the vastness of LA. In LA you can be working on some problem at the same time as someone else and have no idea. For example, CicLAvia recently found out that the city of Santa Monica will be holding its own ciclovía on the same day as us (10-10-10! What fun it will be!). Who knows how long they have been planning this?
But in Detroit, it seems more likely that people cross paths when working on similar projects.

I rode on to Dearborn, passing through first a scrapyard area where I probably breathed in some metal dust, then a working class neighborhood, and then through some legitimately enormous industrial complexes.

I think I might have skirted the Ford Rouge plant.

I'm an experienced vehicular cyclist, so even though I was on a squeaky old cruiser and a few times I wondered if I'd accidentally turned onto a freeway onramp I didn't feel too uncomfortable with semis whizzing past. Plus, it wasn't heavy traffic, just a truck passing every so often with plenty of lanes to spare.

When I reached an area in Dearborn that seemed to be nothing but suburban office complexes and the most blandly exclusive subdivisions I could imagine, I did hop onto a sidewalk. But then I took a lane again once I saw street signs directing me to the Henry Ford stuff.

I felt a haughty pride as I passed under the gates of the park. My princess dress may have been drenched with sweat, but I'd ridden a bike to a monument of car culture tucked into one of the least human scale landscapes I've seen in a while.

I've been using an iPhone app called Cyclemeter to track my bike rides, so here's a record of how I got to the Henry Ford from Corktown.