(I couldn't resist that pun, it cycles through my mind regularly)

This summer I'm doing a project where I compare formal bike infrastructure and DIY approaches to making biking easier in LA, Portland, Detroit, and New York. Why four cities? Yeah I don't know. Comparisons are seductive for anthropologists.

I'm researching bike infrastructure issues in Detroit now. There are a few off street bike paths here, but for the most part there are no bike lanes, no signage, nothing to indicate the presence of bicycles. There are a fair number of bicycles, though.

When I visited this place last summer, a few things struck me:
1. So many European intellectuals visiting at any given time
2. Everyone here knows each other
3. Bicycling is a horse of a different color here.

It all still holds. Detroit has become a laboratory for people curious about urban farming, architecture, decay, rebuilding a localized economy, and shifting away from cars. Living here seems hard in some ways, for instance the center city suffers from a lack of services. If you are alternatively minded, though, the opportunities for creative solutions to survival overflow.

The city's wide avenues work well for bicycling, especially because density is a hard thing to find here. The only crowd I've seen so far had gathered around a high school football game. I knew something must be up, cause I was riding along an otherwise empty street and came upon lots and lots of parked cars. Then I saw the game, which explained the people.

Bicycling here feels very free in some ways. The painted lines of the street seem irrelevant on a four lane street with nobody else around. I can turn in wide arcs instead of sharp darts. Oops, missed the turn; make a big ol' U turn, no problem.

At the same time, many parts of the city have been abandoned, creating grids of empty fields marked by one or two remaining old row houses. As an outsider I don't know how to gauge where it is a better or worse idea to travel. I like to drift around and explore unfamiliar cities, and it is so easy to bike here that it seems inviting to just wander around. The other day, though, I found myself on a block of ruins with no major street in sight, a disabled person sitting in a wheelchair in the middle of the road, a few pedestrians walking toward me, and one or two cars cruising past. Oh shit, it dawned on me. Am I safe?

Part of it stems from my Californian ignorance regarding Midwestern color lines. As a brown person, I do not understand how to negotiate the habitual divides between blacks and whites in this part of the country. What do Detroiters think when I ride by on a cruiser, clad in some turquoise dress, looking my most Mexican with my deep summer tan? Does race matter when one is clearly subculturally marked "hipster"? How does socioeconomic status get revealed through things like a vintage bicycle and pink plastic glasses?

The other factor I've encountered in bicycling in Detroit stems from an opposite problem to what we face in LA. There, I worry about not being noticed by drivers. Their lack of attention freaks me out on a regular basis. Here, the attention is a-flowin', but it's pretty sexualized. I am not accustomed to people talking to me through car windows, or trying to have a conversation with me as I ride past. When I'm riding in LA I feel pretty insulated from unwanted social interaction, like much more so than when I'm walking or using public transportation. In Detroit I haven't tried taking a walk cause it seems like there would be no buffer at all between me and every man who wants to comment on my body in some way.

In short, the experience of bicycling in Detroit becomes highly gendered because of cultural norms regarding attention to female bodies, and the requisite exposure of bodies in an activity like cycling.

I'm still enjoying being here and biking here, though, despite feeling like a spectacle from outer space sometimes. I went to an art festival on Belle Isle (America's largest city-owned island park) yesterday. The people contributing to Access Arts got to design installations around trees, fields, and other earth forms in the park. Visitors could pick up maps from various points around the island.

My favorite piece, Jacklyn Brickman's "Vernal Pond(s)," invited visitors to make sounds with various devices strung up in a tree or attached to a fence. A little booklet gave instructions on how to approach the noisemakers, and since the artist was on hand she explained that each sound derived from a frog call. 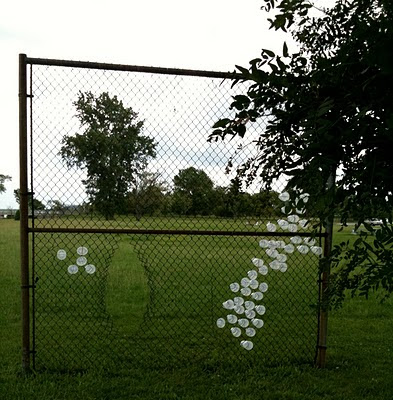 This part of the installation let you pluck a rubberband that had been strung across a plastic cup. We were instructed to wait ten seconds between plucks. Each cup produced a slightly different tone. I think this one referenced tree frog calls.

Then I rode back into town, and oh my gosh, the combination of the blue green river and the gorgeous sky, so lovely.
Posted by urbanadonia at 11:31 AM