I got to Detroit at 12:30 am last night, and was promptly spirited away to a wonderful land of showers and couches by my gracious hostess, Mary Beth.

This morning we headed to Ann Arbor, where she's been househunting in preparation for starting a grad program at University of Michigan in the fall. We took along some bikes so she could show me around the place.

I assumed Ann Arbor would be similar to Eugene, Berkeley, Austin, or any other college town I've visited. And it was, which is not a bad thing. Lots and lots of subdivided houses crammed with tiny units housing students sit in relaxed neighborhoods, and the numerous porches see frequent use. It reminded me that this part of the country seems teeming with life to me, what with all its humidity and greenery. I'm still digging this "exotic Midwest" thing for whatever reason.

We rode bikes around the university area. Mary Beth fixed me up with this pretty old Schwinn cruiser, the same kind of bike I'd just been bashing yesterday with a friend while having lunch in Chicago on my train layover. 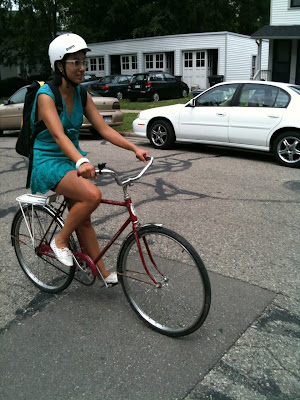 As I am accustomed to hand brakes, and know how to get my road bike's pedals quickly in position to start off again, I found stopping and starting on this guy a little difficult. But I actually enjoyed riding it a lot more than I expected. It does feel awfully regal to sit up straight and pedal down the middle of the road, never fidgeting with shifters or bending over the handlebars to get speed.

Part of the pleasantness derived from the general behavior of Ann Arbor drivers, who appear to have surrendered to the inevitability of unexpectedly darting pedestrians and bicyclists. Even as I struggled to stop just so, or started pedaling in anything but a straight line, I felt pretty safe. Nobody honked, nobody swerved. I didn't notice much bike signage or even many bike lanes, but there still seemed to be a general attitude of acceptance of bikes. People freaking shared the road!

Grabbing lunch in a food co-op, I had a conversation with the cashier about the differences between biking in LA and in Ann Arbor because he had spent some time commuting from Inglewood to West Hollywood. This thing on my leg, which I keep forgetting about, keeps revealing my secret bike identity to strangers. Mission accomplished. 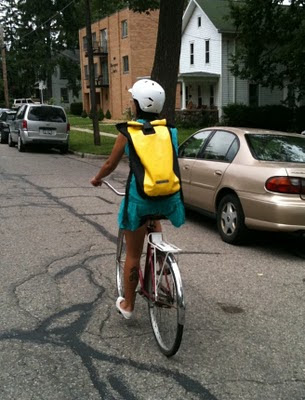 Posted by urbanadonia at 3:34 PM