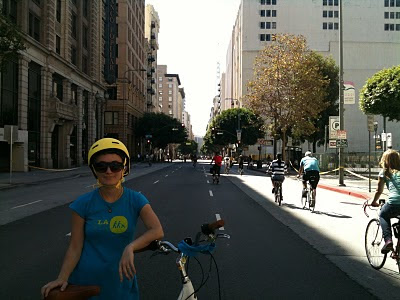 Yesterday I got to witness the realization of a dream I'd shared with a few other people since October 2008. I got to see how many people would bike through this city, all too often dismissed as a non-city, if we opened our streets to them.

It hasn't quite sunk in yet, that we made it happen in LA, that CicLAvia brought out somewhere between 60,000-100,000 Angelenos and visitors.

This morning I've been perusing others' accounts of the event, and thinking about how I just knew, as soon as I went to Bogotá and saw the ciclovía there, that this would be a great thing for LA.

I didn't know so many people would agree.

As an anthropology student I've been grappling for a few years with the disjuncture between a preference for driving in LA and the concrete reality of the city, not suburb, that I inhabit. I'm just starting my dissertation fieldwork on bikes, bodies, and the city of Los Angeles. What a gift to be able to see tens of thousands of my neighbors enact the possibilities of a carfree LA as the starting point for my fieldwork! There could be no more reassuring confirmation that my goal of combining academic research with community engagement lies within my grasp.

I know a lot more now about what it takes to facilitate an open street event. I hope the people who attended CicLAvia on 10-10-10 clamor for more so that they don't have to wait for another two years to revel in our beautiful urban landscape. When we first started talking about holding a ciclovía in LA people would reminisce about ArroyoFest, the event that shut down the 110 freeway to Pasadena in 2003. CicLAvia will stick in Los Angeles' mind for years, but it should be because of an ongoing opportunity to live in our streets like we did yesterday for five hours.

Thank you, Los Angeles! More specifically, thank you Bobby Gadda, Stephen Villavaso, Colleen Corcoran, Jonathan Parfrey, Allison Mannos, Sandra Hamlat, Joe Linton, and, more recently and to great effect, Aaron Paley, Amanda Bromberg, and Jenn Su. The mayor's office and the offices of the council districts through which the route passed (CD1, CD4, CD9, CD13, CD14), the neighborhood councils that showed us support early in our planning process, and all the community groups that got excited about the idea, gave us an opportunity to change LA.

And of course, thank you Jaime Ortiz Mariño and the city of Bogotá for inspiring us to begin with.
Posted by urbanadonia at 1:29 PM