I recently finished Bike Works' Adult Basics Class (ABC), where I'd been spending my Sundays for the last six weeks learning about basic bike repair. The teacher, stylin' bike advocate, comic book artist, and all around wonderdude Davey Oil, had started us out with some basics not about bike repair, but about the social dynamics of bike repair. He encouraged us to think about how the bike world does not necessarily interrupt the race/class/gender discrimination many people experience in their everyday lives. So, fittingly, he wrapped up the class by asking us to use our new bike knowledge to help people, not to bludgeon them with our insider status.

To me, Davey's observations were spot on. I've avoided learning much about bike repair even though I've been an urban transport cyclist since 2005. A big reason was having a partner who enjoyed learning about sprockets (guess who got the bike pump when we split up), but I also felt out of place in bike co-ops and other spaces where some people knew a lot more about how these machines functioned than I did. I tend to feel intimidated by my own ignorance, and it can get in the way of me learning new things. When I lived at the LA Eco-Village, even with the fabulous Bicycle Kitchen a few blocks away and many cooks as my neighbors, I didn't blossom into bike repair glory.

I did spend a few hours at the Bike Kitchen on a Saturday back in 2010, learning some bike maintenance basics. The thing that stuck with me, though, wasn't how to hang a bike on a repair stand, but that my front brake freaked bike mechanics out. 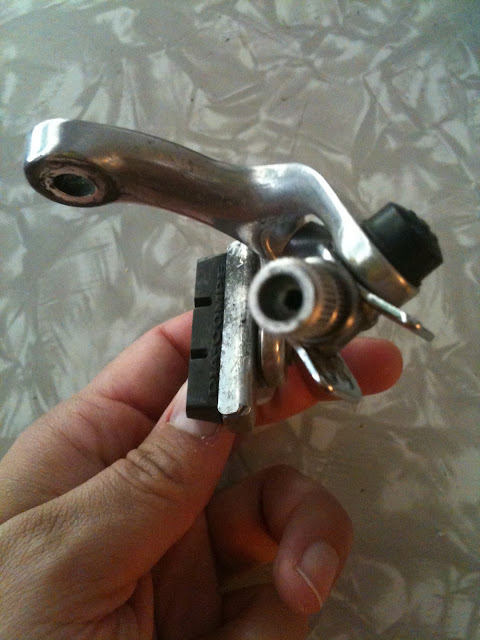 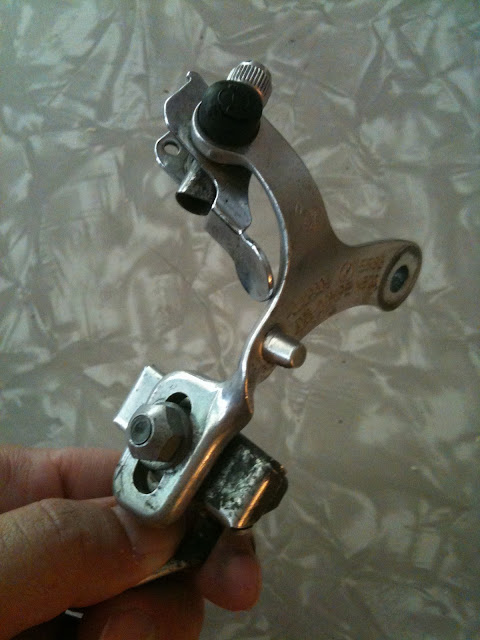 What we see here, folks, is a caliper arm that has been bent at an odd angle. Here's how it should look in context, the one marked 5:

Back in 2007, when I still lived in Portland, I came out of a shop on SE Hawthorne one afternoon, and discovered, as I tried to ride home, that my handlebars had a new shape and that the front wheel would turn only under duress. Baffled, I eventually decided that someone had attacked my bike with a blunt object. I took it in to the Bike Gallery on SE Woodstock, and they installed new handlebars. The mechanic there explained that though one of the front brake's caliper arms had been bent, it still worked just fine, so he wasn't going to replace it.

So I rode around for years, not having any problems with my brakes. I knew that my front brake looked funny, but usually I forgot about it until a look of horror crossed the face of the person-in-the-know examining my bike. Especially once I started doing outreach with day laborer cyclists, some of whom managed to get around on bikes with much bigger problems, I saw my front brake as a symbol of biking unpretentiously. Then, on the first rainy day I rode in Seattle this October, I discovered that my brake was all wonky. Living in a rainy, hilly city has made me more concerned about bike repair than I ever was in Portland or LA. When I asked Davey to take a look at it, his face reminded me about the bent caliper arm.

It turned out to be the quick release mechanism messing things up this time around, but on the last day of ABC, when we got to bring in our own bikes instead of learning on the kiddie bikes that Bike Works refurbishes, I knew what my project would be. Time for a new brake! In order to get the job done that same day with the shop's limited supplies, I ended up replacing my front brake with a simpler one that did not have a quick release for easy wheel removal. I gotta say, I felt pretty good about doing this thing myself. I even figured out that I could strip the replacement brake down to its centerbolt so that I could transfer everything onto the longer centerbolt that had attached the old brake to my bike. 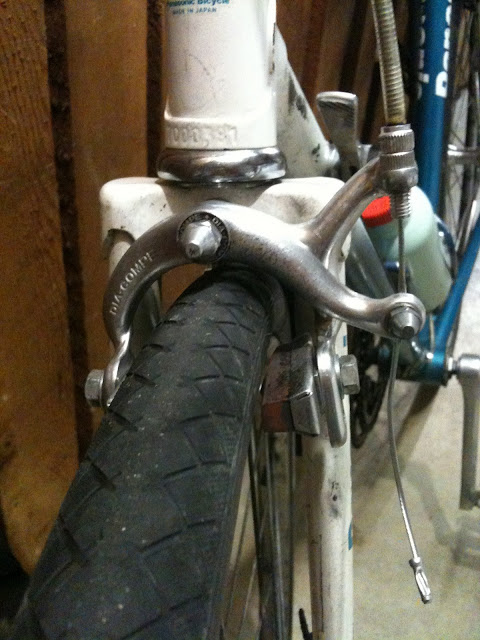 I've got many more overhauls in mind for my bike, now that I feel more comfortable digging in and figuring this stuff out. If you find yourself learning about bike repair and feeling embarrassed, make sure you're in an environment that doesn't take itself too seriously. Davey really drilled us to accept that it's ok to not know what you're doing, and I also once spent a magical afternoon at the Bike Kitchen fixing a flat under the mad tutelage of cooks Eric Potter and Jonny Green, which showed me how fun bike repair can be with the right attitude. I mean, it was like Alice in Wonderland meets Mary Poppins up in there. Thrills galore!
Posted by urbanadonia at 10:33 PM