Our Relatives' Impact on Our Transportation Beliefs 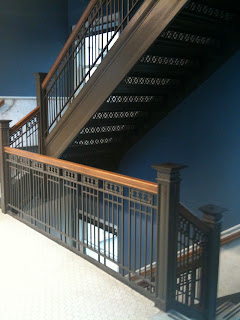 Last night I tried something new, phonebanking! I called Seattle voters and urged them to vote YES on Proposition 1, which would use a vehicle licensing fee to fund street repair and transportation projects. More info here.

The phonebanking took place in an old office building downtown. How I love a good stairwell.

Through the hexagonal wired glass windows, some city views. 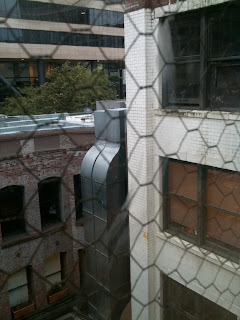 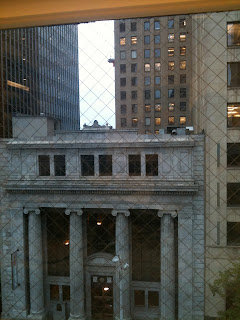 A few people answered their phones, but I mostly left messages. As I dialed number after number, I became familiar with the open static sound that would precede the jarring "dee dee dee" of the disconnected number message. I learned to pull the phone away from my ear just before the high pitched tones pierced my eardrums. Sometimes I reached the parents of young people who had moved out, I guessed from the curt "she lives on her own now" type responses. On one such call, the mother seemed confused. She asked if Prop 1 supported public transportation. Yes, it did, I replied. Well, then, she said, the voter I was trying to reach would be in favor, because we have to do whatever we can for that! I liked encountering a family commitment to public transportation. (Also I could hear a cat meowing in the background, points for that).

Recently my sister moved to Boulder, Colorado, a town with a thriving bike culture. She called me the other day to tell me how frustrated she felt by entitled bicyclists. One guy took up the whole lane! She had to stick her head out the window and yell cause he wouldn't move. I explained that taking up the whole lane is legal, and often necessary. Oh, she said, she hadn't known. By the end of our conversation she decided that instead of writing an angry letter to the town newspaper about ill-behaved cyclists, she'd be writing about the lack of education about our shared rights to the road.

How many motorists share her frustration, but don't have a bike advocate sister to call on the phone? Our families and friends have such an impact on what we think about transportation, and how we decide to get around. Living in a community of carfree folks made it easier for me to live carfree in Los Angeles, but come to think of it, I had started learning how to get around on public transportation there when visiting that same sister years before.

On that note, I am very happy to report that my mother, whose first attempt at bike/train commuting I wrote about last November, used a recent fender bender as an excuse to reflect further on her carfree commute in Orange County. I'm going to post her thoughts here soon.
Posted by urbanadonia at 11:52 AM