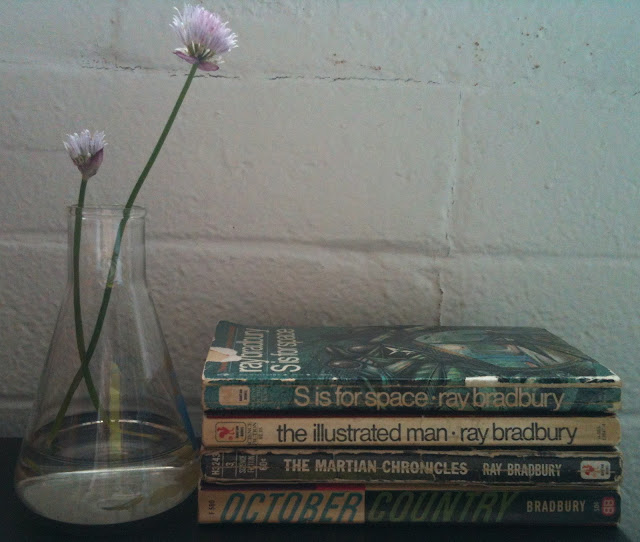 Ray Bradbury has been on my mind a lot lately. I've written here before about how I like to read his work, especially the memoir Dandelion Wine, as a summer invocation. This week I re-read "Dark They Were, and Golden-Eyed," which imagines Mars making Earth life its own. The soil changes the plants, and the air changes the people. It's no wonder theory about cyborgs makes sense to me; I've been thinking about the way people, things, and places blend for a long time because of Ray Bradbury.

Over and over I've thought about writing him a letter, but felt shy and convinced myself he's received so many letters that mine would be pointless. This thought came into my mind again last night. Today I learned that he died, so I'm going to write my fan letter here.

I want to thank you for shaping my outlook on the world. I've found a lot of inspiration in your work for my vision of urban sustainability. You wrote many stories challenging the doldrums of conformity, you invented many lone figures walking in worlds hostile to such wandering.

I like to think of myself as a Martian when the sun has turned me a deep golden brown, and I yearn to walk in the cooling canals of the villas you described.

Living in the sometimes sopping Pacific Northwest, I've thought of your space travelers trudging, trudging, trudging through Venus' endless downpour. I've longed for a sun dome like the ones you described to welcome me in from the wet, green rain.

I can see so clearly the billowing waves of oxygen pouring forth from the trees that grew up overnight on Mars, when a new age Johnny Appleseed planted seeds across the planet.

Your nostalgic vision of summertime in Illinois drew me to the midwest. From the windows of trains, I have seen many landscapes where I've imagined Uncle Einar soaring over the power lines. Biking through the heat of Michigan and Ohio, I looked for your family's Victorian boarding house.

This week I watched the 1980 made-for-TV version of The Martian Chronicles, and found it very faithful to the book in spirit. The adaptation makes Rock Hudson, as Colonel John Wilder, the protagonist of the book's final story, "The Million Year Picnic." Unlike the character in your book, the TV Wilder gets to converse with a Martian, who explains that the key to life on Mars is relaxing into nature. So, in the end, when he shows his children their reflections in a canal and tells them that they are seeing Martians, we know that they will find a way to harmoniously thrive rather than hardscrabble survive.

Earthmen fight nature; this is a theme that rings over and over throughout your work. Even in ecological sustainability I have found voices that preach this oppositional stance. They suggest that each man is an island unto himself, and must prepare himself for a coming fight over resources. When oil runs out, people will explode in panic rather than adapt, unless they prepared beforehand. Other people become one aspect of the larger enemy, Earth's changing conditions of life. I certainly agree that we must end the madness of exploiting finite stores such as oil for temporary profit in exchange for lasting destruction, but this will require cooperation. Reproducing the survivalist outlook that privileges one man's sovereign property over the world's health does not make much sense to me. Is the thing they fear adapting to a changed landscape where we must give up things we took for granted? Is Earth becoming Mars? Well, because of your writing, I breathed in the changed air and became a Martian a long time ago.

I don't know if you advocated for sustainability the way you advocated for the magic of libraries and big, dusty bookstores, but your writing encouraged me to think about our planet's future with hope rather than with fear. I love re-making, re-purposing, combining old materials to invent something new. The Swiss Family Robinson treehouse at Disneyland, camping every summer as a kid, shopping in thrift stores for as long as I can remember, and your stories: these are the things that have inspired me to see living sustainably as a fun adventure in cooperation.

I hope you are climbing through the night air with the fire balloons, on your way to the stars whose stories you told.