Waiter, There are Bicycles in My Celebrity Gossip

I like celebrity gossip. I find it fascinating! Though I keep an intellectual distance because I assume they're mostly made up stories, ever since I first encountered a People magazine at my grandma's house I have never broken the habit of following who is dating who, who is rumored to be cheating, and other scandalous stories. I don't listen to top 40 radio, I don't watch broadcast TV, but through my insatiable thirst for tawdry details I manage to keep my finger on the pulse of pop culture. Today I noticed some bicycles in the gossip news.

The first bicycle was underneath reality TV personality Coco. Coco is married to rapper/actor Ice T and, well, she's famous for having a really large butt. In these pictures, Coco is riding a bike on a beach boardwalk. Boardwalk bicycling is one of the few forms of biking that never became unacceptable for adult Americans. At many beaches, you can rent a cruiser with a really low seat and handlebars angled so that your hands fall asleep and awkwardly make your way down a crowded path. For many people, this might be what comes to mind when they think about bicycling: riding as a diversion in a space set aside for recreation, like a beach or a park. Does the image of a woman with a hypersexualized body on a beach cruiser still promote bicycling as transportation? Should the League of American Bicyclists hire Coco as a spokesmodel?

I first learned about Coco because I read a gossip website called Dlisted, written by a blogger named Michael K. He's a mixed race gay man who writes tawdry commentary about celebrities, and he has a penchant for featuring people whose cultivated personas could be called tactless at best. The site has a daily "caption this" contest where Michael K posts some weird picture and his readers submit jokes, usually based on nicknames and other phenomena from Dlisted canon. Today the picture was of someone riding a tall bike.

If you're unfamiliar with the concept, tall bikes are welded together from multiple other bikes. I've also heard them called "freak bikes," and their enthusiasts often form social clubs around building and riding them. Here's a tall biker jousting at Portland's Multnomah County Bicycle Fair in June 2009: 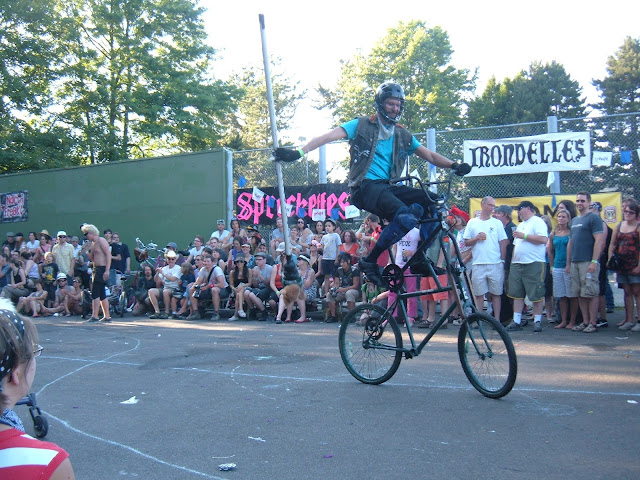 Seeing a tall bike as the subject of Dlisted's caption contest makes me wonder what bike subcultures mean to outsiders. I just read a 2006 article by social scientist Kimberly Christen about a CD of aboriginal women's music, and how people not familiar with the culture that produced the music wouldn't listen to it in the same way as the community that had created it. What are Michael K's readers going to think of this tall bike? Are they going to think Bike Fun FTW! or are they going to think Loser on a Pile of Trash?

Bikes pop up in all kinds of places, and the same image might not even mean the same thing to two people who participate in very different subcultures. To me, making bicycling unexceptional in the U.S. will mean making it ok for all kinds of people to use bicycles in all kinds of places. Coco and the freak biker are both on two wheels. I'm curious to see what caption Michael K will post as the winner tomorrow.
Posted by urbanadonia at 2:22 PM