From Viking to Biking Dublin

Dublin was founded by Vikings, who sailed their wooden ships from the Irish Sea up the River Liffey to the River Poddle and found a defensible body of water that they called Dubh Linn, black pool. They built a stone wall that later became a castle, and today the black pool is a garden in the castle complex. The river that fed it now runs underground, and on the surface roam thronging hordes not of Vikings, but of tourists. The central quarters are packed with visitors who believe in this party capital's power to bring the fun (or at least the Guinness and traditional music). Hen and stag parties from the UK mingle with Croatian soccer fans as big blue and yellow buses lumber past and small cars wind through the curving city streets. A bike share system called Dublin Bikes has been installed, and I saw many people braving the densely packed traffic on public bikes. 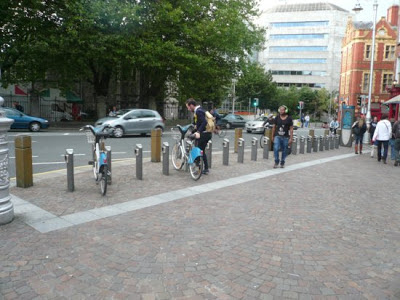 With local bicycle planning consultant and sociology PhD student Damien Ó Tuama as my guide, I spent a day in late August biking around Ireland's biggest city. I felt very fortunate to spend time with such a knowledgeable participant in Dublin's bike movement. I encountered many of the same bicycle infrastructure designs and dilemmas that I know from the west coast of the U.S. I learned some vocabulary:
Bike advocate = Cycle campaigner
Speed bump = Ramp
Bike lane = Mandatory or non-mandatory cycle track, cycle lane
Right of way = Priority 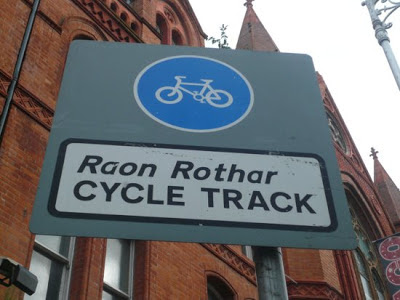 The travel-on-the-left thing made me feel totally disoriented, so I followed Damien closely on the sturdy hybrid he'd lent to me for the occasion. Bike lanes sometimes ran over double yellow lines, what to me look like the divider between different directions of travel, which here indicate no parking zones. 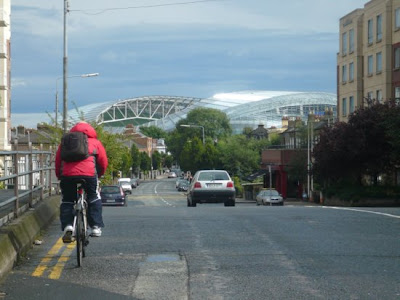 I had asked Damien before our trip if bike commuters in Dublin find routes that run roughly parallel to major streets to avoid heavy traffic like we do in the U.S. Turns out, in a radial rather than gridded city, this method is less feasible, at least close into the center. In the suburbs, where there are wider streets, the situation is different. 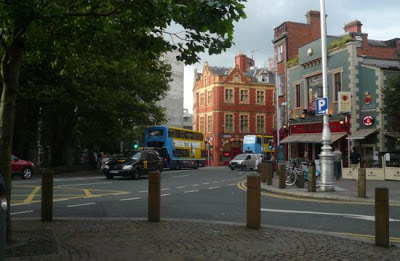 The city's ancient core has narrow streets that will not accommodate much widening, so bicyclists share space on major routes into the city with cars and buses, with the right to ride in bus lanes when available (though not in contraflow bus lanes). Since the buses are generally double deckers, this made me feel pretty small when they passed us.

Coming from the U.S., I really enjoyed seeing so many bus lanes. In many cases I saw that on streets wide enough for three lanes, there was one car travel lane on each side and a bus lane in the direction of the city center. Damien explained that the bus lanes had allowed for more certainty about travel times, which encouraged more people to use buses.

In LA, I remember people acting like adding a bus lane on Wilshire was tantamount to heresy. Burn the bus lane witch! Bike advocacy and planning mean something different in landscapes where there are already many people using public transit by choice.

Dublin allows taxis to use bus lanes as well. They deregulated their taxi industry in 2000, and there are approximately 13,000 cabs on the roads now. Their cabs are much smaller than the hulking yellow sedans we use in America for such purposes, but I noticed similar driver behavior there, with the cabbies darting and swerving as they attempted to bend space and time to get passengers to their destinations.

Here was a familiar thing: despite the infeasibility of developing a city-wide cycle network on narrow streets, Dublin's city planners have decided that installing separated bike/ped facilities is an important symbol of participation in a global sustainable transport culture. They, too, look to Copenhagen and Amsterdam, just like New York, which has installed a number of Northern European-style separated bike facilities in the last few years.

The Grand Canal Cycleway is Dublin's shiniest piece of new infrastructure. It follows the Grand Canal waterway, with signalized crossings at busy streets. It stops and starts oddly, with confusing signals sometimes applying to peds and bikes, sometimes to one or the other (apparently pedestrians are not supposed to use some portions, though they do anyway, especially at crossing points). 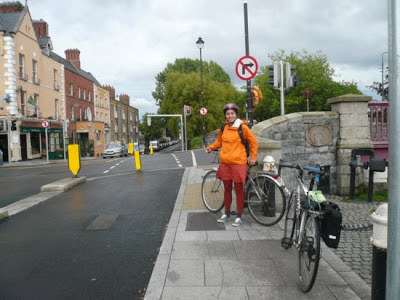 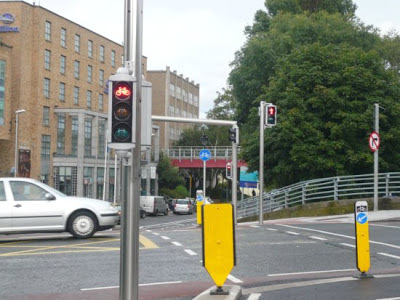 We passed a tram station that connected with the Grand Canal path. The station was on a newly opened line that had been built along an old tramway, where they'd had to rebuild a number of bridges that had been torn down many years ago. More evidence of global trends in transport infrastructure: people turned on streetcars here, too, and now we're all having to rebuild things our great grandparents took for granted. 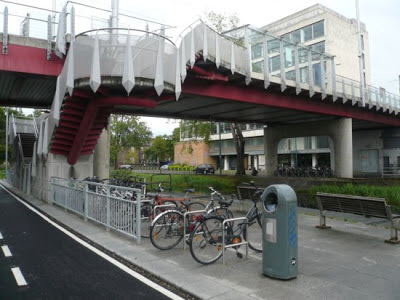 Following the Grand Canal took us into a redeveloped industrial area that had the same kind of glass and steel lofts that I see in every city. It lacked a distinctive character, but maybe that will come with time as people move into the empty spaces? Personally I fail to see the appeal of such uniformity, but I think others might see it as a meaningful symbol of participation in a modern global economy. 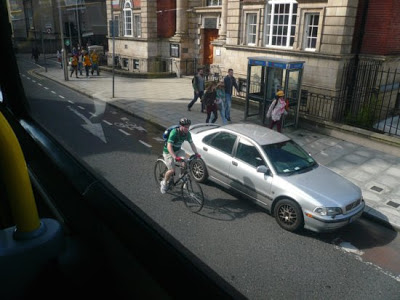 Up until very very recently, cyclists had to use cycle tracks (with the correct statutory signage) where they were provided, and this has now changed due to more than ten years of focused campaigning. Hooray for bike advocates!

I also saw a lot of what I would call “bike boxes” and what Damien called “advanced stop lines” painted before intersections at stop lights. Apparently these have been around for about ten years without necessarily educating drivers about sharing the road; many or even most motorists just pull up into them. 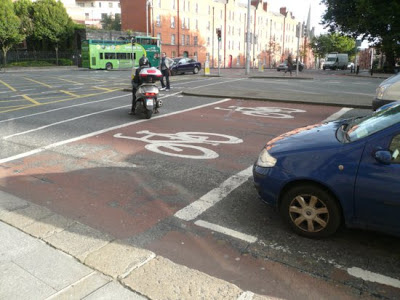 One piece of infrastructure I learned about that has had a big impact on road safety is the Port Tunnel, a major project that removed HGVs (heavy goods vehicles) from Dublin's city center. In the period from 1996-2000, 13 of 18 total bicyclist deaths involved HGVs. Damien told me that pedestrian and cyclist fatality numbers have dropped dramatically since the opening of the tunnel rerouted most freight traffic away from the city's quays and city center routes, combined with the initially controversial lowering of the speed limit to 30km/h (17 mph) within the city center (stats up to 2007 can be found here).

Damien gave me insight into the human infrastructure that makes cycling in Dublin easier, showing me the passages and routes that were not marked with signs. At one point, we biked between the rails on a tramway. Cycle campaigners in Dublin have been lobbying to change one way streets there into two way for bicyclists and buses, but for now navigating can be complicated due to the lack of parallel streets. 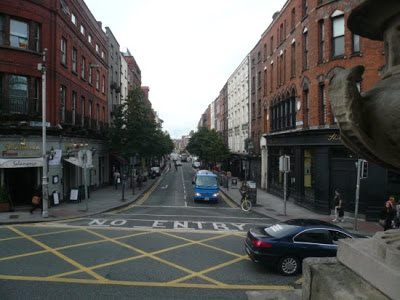 We stopped to admire the Samuel Beckett bridge designed by Santiago Calatrava, a characteristically graceful structure that looked like a massive harp made of bone. Damien pointed out how much of the bridge's space had been given over to bicyclists, pedestrians, and buses (the lane to the left of the car pictured is a bus lane, and there is another in the opposite direction). 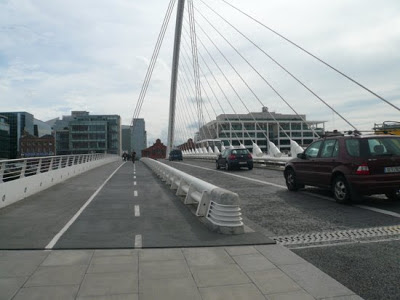 As usual, exploring a new city on a bike showed me things I hadn't noticed while riding the bus or walking around, and the feeling of getting comfortable on an unfamiliar bike kept my attention to my bodily experience of the afternoon. I saw many kinds of people biking in Dublin, from students to workers to people with babies. They clearly have a strong advocacy movement, centered at the all-volunteer Dublin Cycling Campaign, which has been growing for 20 years. I was glad to see that their bike advocates are working with the shape of the city as it exists now, rather than imagining that massive shifts in infrastructure are necessary to increase the numbers of bike commuters. And innovations in Dublin have an impact on the rest of the country, Damien told me, where there is less biking in rural areas than in cities. I was about to see for myself what it was like to live carfree in a place like rural Donegal Town.
Posted by urbanadonia at 11:37 PM