Culture and Transportation in Copenhagen

In preparing to visit Copenhagen, I talked to my Danish aunt, a wonderfully energetic woman who is responsible for the fact that I associate Christmas with risalamande, marzipan pigs, and little red and white paper flags on toothpicks. I had recently decided to pronounce it Copenhawgen, as opposed to Copenhaygen, cause I thought that sounded more correct, and during our phone call Ulla interrupted me and clarified, in her spirited way, "the Germans say it Copenhawgen. In English, it's Copenhaygen!" Chagrined, I asked how the Danes say it. "København," she replied. Ah.

One afternoon in Copenhagen, I was sitting at a café table in a charming cobblestone alley lined with townhouses built hundreds of years ago, when a man driving a Hummer turned onto this narrow street. 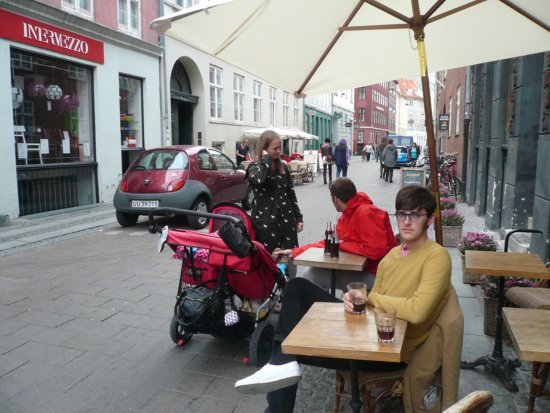 Everyone stopped and stared because of the incongruity; perhaps because he noticed our attention, the driver turned on bass-heavy music that vibrated our eardrums as he drove slowly down the crowded alley. This spectacle prompted a new direction in the conversation at the table behind me, where a young man and woman were seated. The woman had a version of my own nasal, California accent, and the man flirted by talking in accented English about how many local club owners he knew, so I think he was Danish. Here's what I eavesdropped:
American Woman: I used to think Hummers were cool, but they handle so poorly
Danish Man: They're so expensive because Danish gas prices are so high. Gas prices in the U.S. are $4?
AW: Yeah, they thought they would get to $5 this summer, but fortunately they didn't. It really affects people!
DM: There isn't much public transportation there, away from the east coast.
AW: The systems are hardly usable. Maybe in New York it's possible, but the taxis there are cheap too.
DM: One time we took a men's trip to California, a week in Vegas, a week in LA, and we took a bus once.
AW: (gasps) I would never take a bus in LA.
DM: I think I sat next to two serial killers.
AW: Just the people you see at the stops look so trashy.
Then they strolled away, leaving me flabbergasted that I had come across the world to see a city where bicycling is normal only to hear people spew racist/classist bullshit about taking the bus in LA.

What I thought about later, though, was how AW framed her dislike of Hummers from the perspective that they don't drive well. DM framed it as an issue of expense. They had different ideas about what the choice to drive a Hummer would mean. The desire to make bicycling "normal" seems odd to me, when there are many existing cultural ideas about transportation. Many American bike advocates look to Copenhagen as the ideal model for our own, very different cities. When hyping Copenhagen's bike infrastructure, do they think about American diversity or the cultural meanings of transportation? I wonder if there is some vestige of a colonial worldview that makes Northern Europe something cosmopolitans aspire to emulate without wondering why they think designs from that part of the world are so cool. Copenhagen has tons of people riding bikes, but visiting made me think that when I hear about bicycling becoming something "normal," I'm hearing people sidestep the race, class, and gender realities that make each of us approach transportation differently. What's the difference between normal and normative?

Before I visited Copenhagen, I attended a bike research conference in London and heard presentations by several Danish bike researchers. One, a sociologist, started her talk by pointing out the importance of a critical approach, even when studying bicycling in Copenhagen. She said that the image of cycling in Copenhagen is aimed at a mirroring a particular elite identity, and mentioned that immigrants in Denmark use scooters more than bikes. There, too, transportation has cultural meanings. Could it be that there, too, marginalized communities have a heightened need to demonstrate social power, and, like in most of the world, bicycling might be avoided by people who don't want to seem backwards and poor?

I haven't made a point of following the Copenhagen fixation in the bike world, but it's impossible to not notice that many people think the city is a shining example of how bike infrastructure can make bicycling seem normal. What often comes to my mind when people clamor for infrastructure is that they see motorist behavior as fixed and unchangeable, and they seem to think that the only way to get more people biking is to simply remove bicyclists from interacting with motorists as much as possible. I'm pretty interested in how this elides the social participation of motorists in shared streets, as though they really are, like the car commercials would have us believe, traveling alone in a climate-controlled comfort zone. In Copenhagen, I saw this imagined automobile sovereignty clash with social reality just like I do at home. 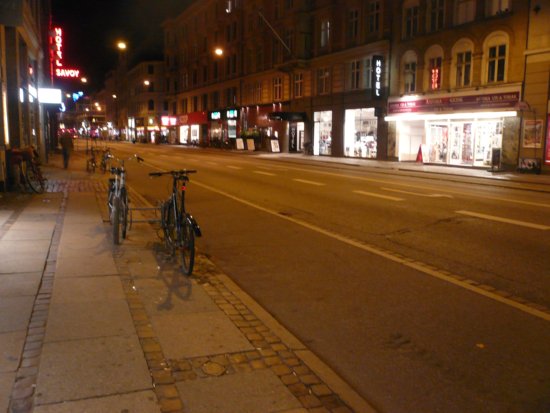 On a Friday night, I saw a car parked partially on the slightly grade-separated bike path next to a busy street. Several bicyclists tapped the car as they rode past, out of annoyance I assume. Suddenly the passenger slammed his door open, into the body of a passing bicyclist. The man on the bike fell over in slow motion, stunned, knocking over several bikes parked on the sidewalk while I heard sickening crunching sounds. The passenger got out of the car and put his hand on the man he had doored, but then he ran off to try and catch one of the people who had tapped the car. Maybe separating transport modes helps maintain hostility between road users; rather than forcing them to face each other as social equals it keeps them apart.

After I left Copenhagen, I traveled to the Netherlands to attend another bike research conference. During the Q&A after my presentation, a Danish bike researcher suggested that bike advocates in LA and other U.S. cities should just ride normal bikes; this would show people that biking does not have to be something extreme. I knew that he meant the heavy cruisers that fill Danish and Dutch bike paths, and I told him that bike advocates do, in fact, ride these, making a big deal out of how un-sporty they are and filling their symbolic baskets with symbolic flowers, popping off briefcase panniers and wearing suits and heels to make a statement. The thing is, I tried to explain, this does not look "normal" to everyone; it's pretty noticeably playing into a particular idea of what it is to be cosmopolitan.

My perspective as a bike advocate is that we need to flood the world with images of diversity in bicycling. We need to change the idea that you have to look "normal" (read: Northern European) to ride a bicycle. I don't know what bicycling will look like when it becomes unexceptional in the United States, but my guess it that it will look like lots of things because Americans look like lots of things. I think we're in a pretty good position to contribute some ideas about promoting diversity in bicycling, actually, but first we have to admit that design should take culture into account.
Posted by urbanadonia at 11:05 PM