Last week, I attended the League of American Bicyclists' National Bike Summit in Washington, D.C., where bike professionals from around the country gather to discuss trends and strategies each March. I've been co-organizing a conference, the Bicicultures Roadshow, that considers the relationship between bicycling and culture change, and I talked to lots of people at the Summit about it. I had a number of interactions with people where I said I do "bike research" and I can tell what they heard was "urban planning or engineering research about bicycles in traffic." Much bicycle research fits into the technocratic system we have constructed to democratically govern our enormous population, with studies that are designed to count things and conclude that numbers show something. Policy decisions can depend on popular approval or disapproval demonstrated through statistics and other forms of quantitative analysis.

The kind of bike research I do is different. I talk to people about bicycling, and listen while they talk about bicycling. I try to be an activist (showing that change is possible) and an ethnographer (showing what people think is possible) at the same time. Unlike researchers, who adhere to a disciplinary structure for producing knowledge, activists are pragmatists; they use various tools to achieve some end goal. In this case, the end goal is getting more people on bikes. The current strategy in bicycle advocacy is trying to convince powerful people (elected officials, corporate leaders) that getting more people on bikes is a good idea because bike projects have economic benefits. The main way they're working to demonstrate this is by using numbers: sales figures, the lower cost of bike infrastructure projects versus highway projects, the numbers of people on bicycles passing through major intersections or riding on bike paths. In a movement so convinced of the necessity of using numbers to make a case for bicycling, what can an activist ethnographer do?

I had an enlightening conversation at the Summit with Luis Vivanco, an anthropologist who just published a book about bicycling, and Harry Brull, a League board member. Luis was explaining that anthropologists often question taken-for-granted phenomena, looking for complexity in seemingly simple places. I started talking about how I'd noticed that so much of the effort of bicycle advocates and researchers was dedicated to showing that bicycling is a good thing, and that increasingly I've been more interested in talking to people who don't like bicycling. I realized that I was doing a typical anthropological trick in trying to use ethnography to show that some people think bicycling isn't a good thing.

I don't want to prove that bicycling is bad, I want to prove that people's ideas about what is good and bad can change. It's a starting point to asking different questions about advocacy strategies. The issue isn't that bikes have economic benefits; it's who gets to enjoy those benefits. If bike projects are used as an urban redevelopment tool, historical divides might well be reproduced as longstanding residents are priced out and new, more desirable "creative workers" take their places. This is a shame because the bicycle should take us into the future, not down the same dead end streets.

What it boils down to is this: we need to change our transportation habits. What needs to change first, the design of our streets, or the demands of our street users? Should we assume that the only way to change our transportation landscape is to engineer different streets? If people were clamoring for bike infrastructure, we wouldn't need to prove over and over and over that bicycling is a good thing. It would be a popular fact. Here are some working models for change that I've been thinking about, and that I heard operating in presentations at the Summit: 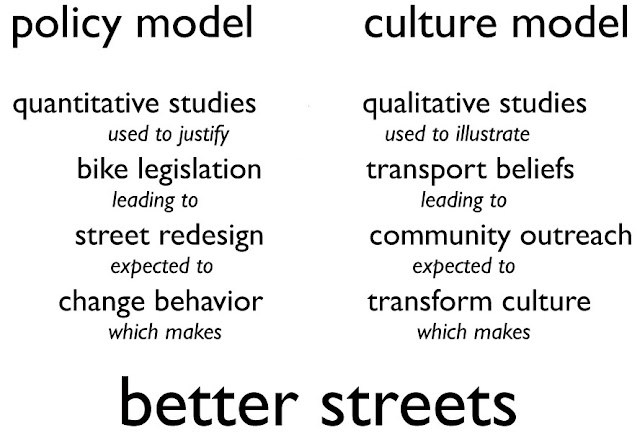 The policy model was dominant at the Summit. The latter model I have pieced together through what I experienced in Los Angeles, what I experimented with in the Seattle Bike Justice Project, and what I have heard from other activists using bicycling as a community-building tool. One contrast these models illustrate is that community-based bike projects might not take the form of infrastructure, while infrastructure projects might involve going into a neighborhood and telling people that bikes are good for them without taking their current views into account.

Besides working to quantify the future benefits of bicycling, a possible direction for bike advocacy is finding out what people think about bicycling now. At the National Bike Summit I saw why numbers matter, but I also saw that there's an opening to talk more about culture. Attitudes and experiences have real impacts on how people use city streets, so they should be targets for advocacy too.
Posted by urbanadonia at 11:16 PM