How I Learned about Human Infrastructure in Seattle

Twice recently, I've heard people involved in transportation planning tell stories about their first time walking or biking in a place where they'd only driven. Both stories ended the same way: and that's how I learned that the city needed better transit or bike infrastructure. These conclusions made me think about the difference between navigating a new space alone and getting oriented through other people. Locals don't approach built environments the same way people unfamiliar with them do; necessity and other pressures cause people to bike on the sidewalks of busy roads, to wait for hours at transit stops next to massive parking lots. In short, people use existing infrastructure wrong all the time, so trying to guess their practices from the shape of the street leaves out the specialized knowledge they're carrying around with them. Local knowledge is one aspect of "human infrastructure," the big idea I'm writing about in my dissertation. The concept coalesced for me, not coincidentally, as I was trying to feel at home in a new city. 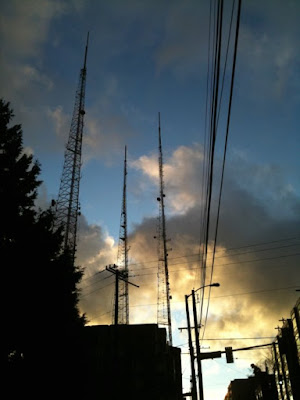 When I moved to Seattle in February 2011, I had some notion that I'd be stepping into a sylvan writer's retreat, where I could get away from the hubbub of my Los Angeles bike life and compose a dissertation about it. But after a few months of malaise, I learned that now that I was an activist, there was no going back. I couldn't settle down and write because I felt like a big ol' pile of wasted humanity. I could see that lots of people in Seattle rode bikes, but I didn't feel very connected to them.

So I sent some emails to people at Bike Works, an organization I found online. I got a response from someone with the unlikely name of Davey Oil, and I made an appointment to visit their headquarters in Columbia City. I didn't really know what I was looking for, but fortunately I found a kindred spirit. Davey and I jumped into a long conversation about our ideals for bike activism (Bike education as a means to fight oppression: yes! Biking as an exclusive subculture: no!), and he explained the work he'd been doing as the volunteer coordinator at Bike Works for several years. Once I started volunteering, I could see that Davey didn't just keep track of volunteer hours and positions; he kept people excited and involved. He made every volunteer feel like the few hours s/he gave to the organization were a vital contribution. I noticed early on that I was not the only person energized by Davey's personality. Every time I went to a Bike Works event, I watched how people's faces lit up when they talked to this guy.

A skilled mechanic, Davey had also overhauled a weekly event at Bike Works called the Volunteer Repair Party (VRP). Unlike the bike co-ops I'd been familiar with in LA, Bike Works was not a place where you brought in your own bike to repair. They used the "recycle-a-bicycle" model, where donated bikes are refurbished and sold or given away to kids who take repair classes. The VRPs were where some of the repair work happened. Regardless of what I knew about wrenching, Davey assured me, I was welcome to show up at a VRP and knowledgeable people would help me as needed to get the little bikes in working order. The VRPs I've attended have been lighthearted and cheerful, and educational to boot. (As I've written about on this blog before, riding home from VRPs with friends also showed me better routes for biking around hilly Seattle.) Halfway through, everyone would break for "circle time," which meant eating ice cream and answering three questions: name, gender pronoun preference, and someone's idea for an icebreaker question. Everybody there contributed to the atmosphere of defiant goodwill, but it was easy to trace its origins to one person: Davey Oil.

Among his many other endeavors, Davey also stayed connected with Critical Mass in Seattle, and Tom of Seattle Bike Blog and I joined him there one month. After we parted ways with the whippersnappers in Ballard, the three of us ended up at Gas Works Park, watching the glowing Seattle skyline. Then we biked back up to Capitol Hill through Interlaken Park, lights off for the maximum effect of the damp green darkness of the urban forest. By the time the three of us organized a ride in September 2011 to mourn recent bicyclists' deaths, I felt less like a waste of space and more like my activist self. In June 2012, Davey invited me to sit in on one of the first iterations of Bike Works' program that brings bikes to adults at community-based organizations. I had never helped a grown up learn to ride a bike before, but now I know that middle aged women get as gleeful as little kids when their bodies start to grasp what it means to balance on a bicycle.

And then last August, I left on a monthlong trip and never really returned to the routine I'd established in Seattle. Now I mostly sit at home working on my dissertation and other projects, content in the knowledge that I can be an activist through my writing. Recently I attended a Bike Works volunteer appreciation party, and saw once again what a warm community thrives around that organization. Since Davey was moving on to start exciting new endeavors, the party became a sort of farewell event. People stood up and talked about their experiences with him, emphasizing again and again how welcoming and fun he had made things for them. Too shy in the moment to stand up and say my own piece about Davey, I sat thinking about how well he exemplified the concept of human infrastructure, a figure who shapes the conditions of possibility for what others can do. And then I realized that Davey was more than an example of this: he'd been a catalyst by showing me that I needed to express the idea in the first place.

Seattle isn't in my dissertation, but biking here, and talking to bicyclists about biking here, has shaped my ideas about Los Angeles. It's kind of surreal to try and formulate a theoretical concept through experiencing it, but that's what anthropologists do. Our work develops as our bodies move, and I sure appreciate my fellow travelers like Davey.
Posted by urbanadonia at 10:13 PM